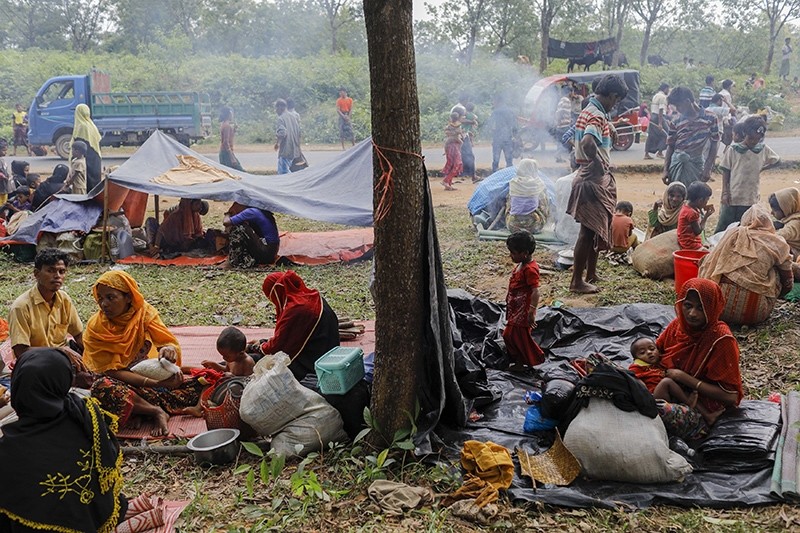 Newly arrived Rohingya refugees rest on the roadside after fleeing to Bangladesh from Myanmar in Ukhiya on Sept. 6, 2017. (AFP Photo)
by Daily Sabah Sep 06, 2017 12:00 am

"Rakhine is not an uncharted territory for us. The humanitarian drama that is going on in Rakhine has existed for decades," Erdoğan said, adding that the Rakhine issue has complex reasons behind it.

The president underscored that there is an attempt to remain silent and push the Rakhine crisis under the carpet and added that the intensity of the crisis can be seen through the fact that none of the humanitarian groups have been allowed to deliver aid.

"Last Ramadan the only foreign body to officially provide aid in Rakhine was [Turkish Cooperation and Coordination Agency] TİKA. After talks following the latest developments, we ensured that TİKA's humanitarian activities in the region will continue," Erdoğan said.

The president said that first lady Emine Erdoğan and his son Bilal Erdoğan would join Foreign Minister Mevlüt Çavuşoğlu, who was traveling to Bangladesh to deliver aid to Rohingya refugees fleeing Myanmar due to violence.

"The world has witnessed enough of pain and suffering. We will continue to be the voice of Rakhine's Muslims, to help them," Erdoğan added, reiterating his call to end the violence and to find a permanent solution to the Rohigya issue.

The president vowed to bring up the Rohingya issue during Organization of Islamic Cooperation (OIC) summit in Kazakh capital Astana, which will take place between September 7-11, and during the U.N. General Assembly set for September 20 in New York, adding that he discussed the crisis in Rakhine with nearly 30 world leaders, especially of Islamic countries.