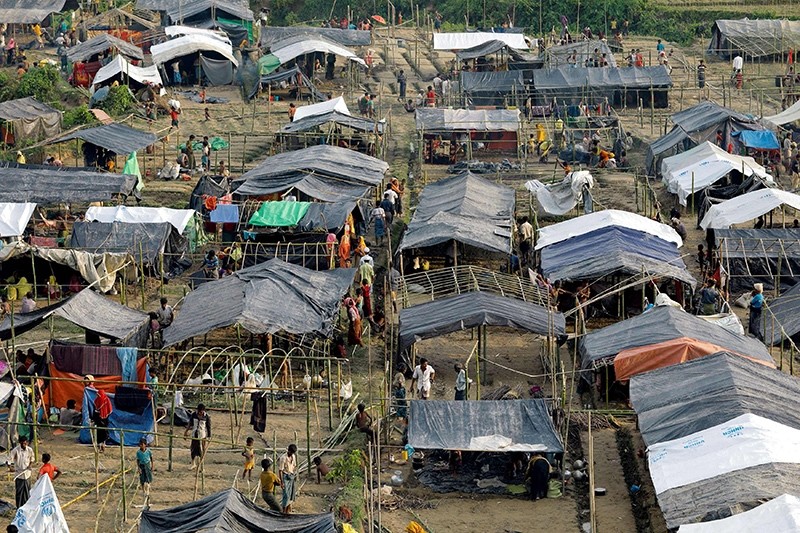 This file photo taken on Sept. 5, 2017 shows Rohingya refugees from Myanmar's Rakhine state set up shelters at a refugee camp at Unchiprang near the Bangladeshi border town of Teknaf. (AFP Photo)
by Daily Sabah Sep 08, 2017 12:00 am

Turkey is planning to build refugee camps for Rohingya Muslim refugees in Bangladesh, President Recep Tayyip Erdoğan said Friday as the U.N. reported that the existing camps were "bursting at the seams."

Speaking to journalists ahead of his trip to Kazakh capital Astana, Erdoğan expressed hope that the upcoming summit of the Organization of Islamic Cooperation (OIC) would make the Muslim world's voice louder regarding violence in Myanmar that forced tens of thousands of Rohingya seek shelter in neighboring Bangladesh.

Highlighting the poor conditions of the Rohingya camps in Bangladesh, Erdoğan revealed Turkey's plans to improve the situation.

"Unfortunately, current tent camps are not very livable. Taking our local experience there, we are planning to build more secure and livable tent camps, if Bangladeshi authorities would allocate a special area for them," Erdoğan said.

The president added that several informal talks with various leaders regarding the situation of Rohingya Muslims should be expected on the sidelines of the OIC summit in Astana.

"Hopefully we will make progress toward ending bloodshed and violence during this summit," Erdoğan said.

Meanwhile, U.N. High Commissioner for Refugees Vivian Tan said that about 270,000 Rohingya fleeing violence in Myanmar have sought refuge in Bangladesh in the past two weeks.

Tan explained the sudden surge compared to previous reports, saying the U.N. identified more people in different areas that it was not aware of before.

"The limited shelter capacity is already exhausted. Refugees are now squatting in makeshift shelters that have mushroomed along the road and on available land in the Ukhiya and Teknaf areas," Tan said.

She added that vast majority of Rohingya refugees were women with children, including many newborn babies, who "arrive in poor condition, exhausted, hungry and desperate for shelter."

Citing the alarming number, Tan called to address the situation in Myanmar urgently.