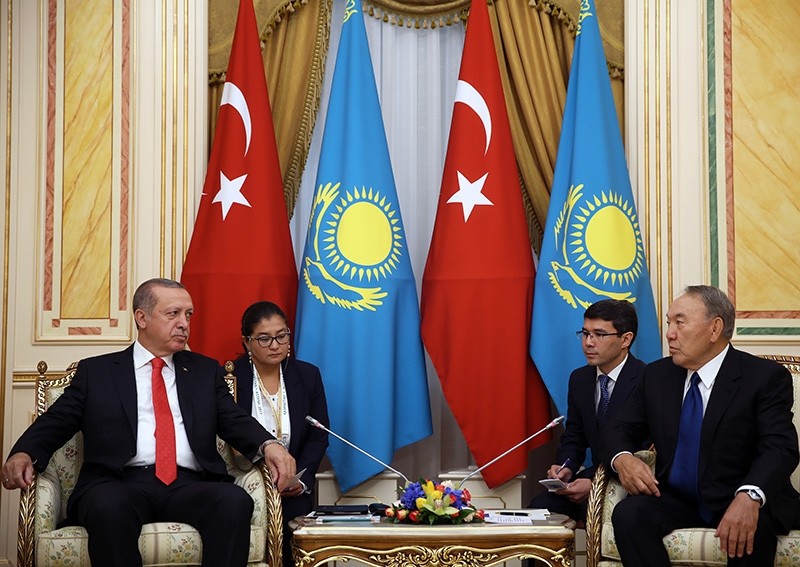 President Recep Tayyip Erdoğan said that preliminary work for the upcoming Astana Summit which will be held Sept. 14 has been finished and added that the steps taken toward establishing peace in Syria will hopefully be finalized in Astana.

Speaking at a news conference with Kazakh President Nursultan Nazarbayev in Astana, Erdoğan said that the outcome of Astana will determine the success of Geneva process.

He also noted that Turkey and Kazakhstan should work together to boost bilateral trade ties between the two countries.

"Our goal is to boost the trade volume to $5 billion [from $2 billion] as soon as possible, as we previously said" Erdoğan said, adding that both countries have the potential to achieve this goal.

Meanwhile, the Kazakh president said that Turkey and Kazakhstan collaborate on a number of issues, including regional problems and other projects.

A week after his visit to Kazakhstan, President Erdoğan will attend the U.N. General Assembly in New York City in the U.S. from Sept. 19 to Sept. 25.

Turkey and Kazakhstan established a High Level Strategic Cooperation Council in May 2012 when then-Prime Minister Recep Tayyip Erdoğan paid a visit to to the country. The first meeting of the council was held from October 11-12, 2012 during President Nazarbayev's visit to Ankara. The second meeting was held from April 15-17, 2015 during President Erdoğan's most recent visit to Kazakhstan.