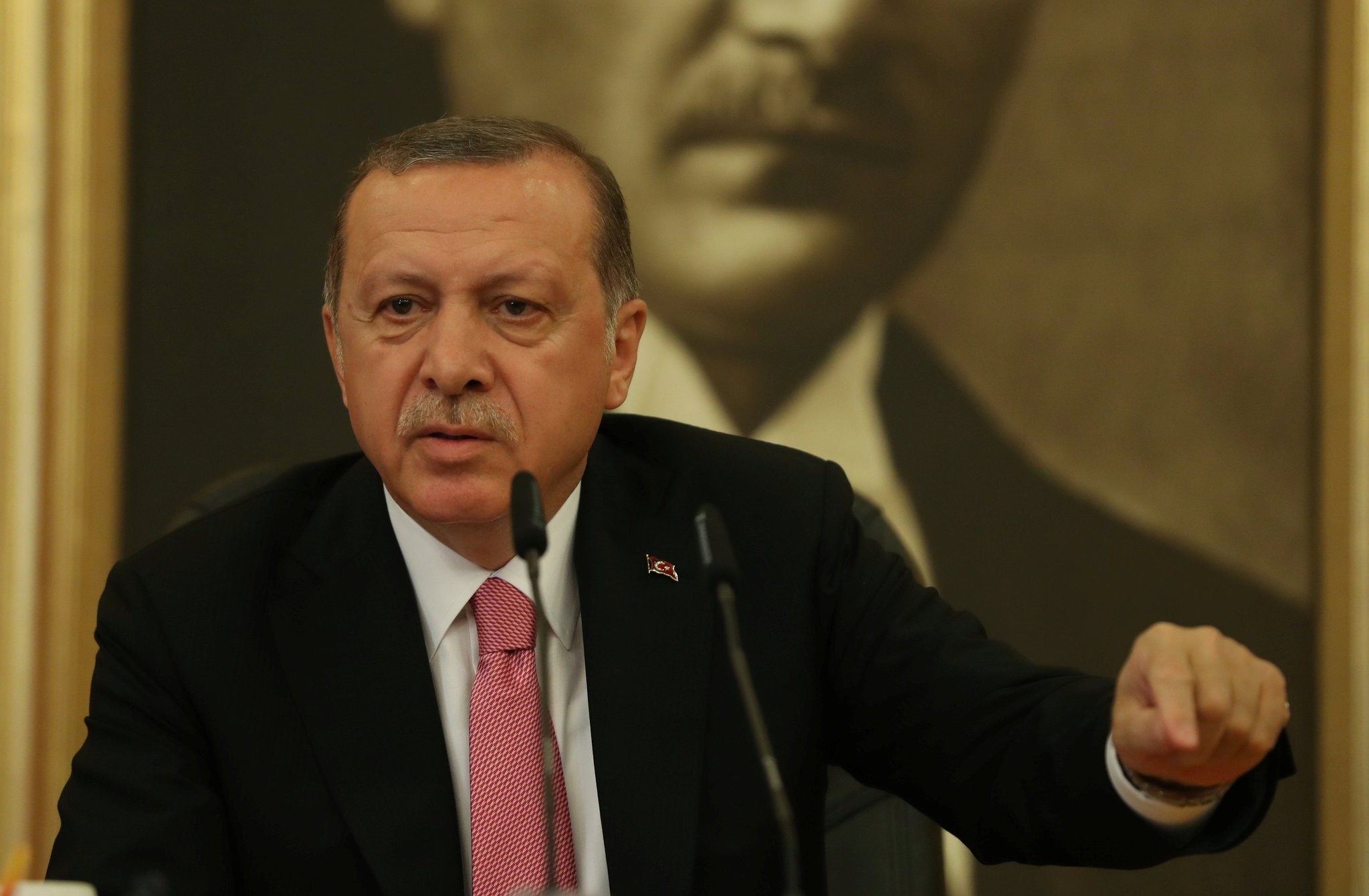 President Recep Tayyip Erdou011fan said on Friday that the recent legal decisions made by the U.S. prosecutors against a former economy minister and his security personnel are politically motivated.
by Daily Sabah with Agencies Sep 09, 2017 12:00 am

President Recep Tayyip Erdoğan on Friday slammed the U.S. administration in response to charges that were filed against a former economy minister accused of violating U.S. sanctions on Iran, calling the decision a political step taken against the Turkish state. "This issue is a really an interesting one. It is already not possible to comment on this keeping legalities in mind. I am assessing the legal step taken against our former economy minister and I am emphatically saying that this is a step taken against the Republic of Turkey, as [the U.S.] has not been able to provide the basis of the allegation against him personally as of yet," President Erdoğan said in Istanbul ahead of his departure to Kazakhstan to attend the Organization of Islamic Cooperation (OIC) summit.

U.S. prosecutors charged the former Turkish economy minister, who is also the former general manager of state-owned Halkbank, Süleyman Aslan, and two others for conspiring to evade U.S. sanctions against Iran, the U.S. state attorney's office in the southern district of New York said in a filing Thursday. The indictment broadens a case targeting Turkish-Iranian gold trader Reza Zarrab - arrested in Miami in March 2016 - over sanction evasion, which has fueled tensions between the U.S. and Turkey. Zarrab and Halkbank Deputy General Manager Mehmet Hakan Atilla, who was arrested while in the U.S. in March 2017, are scheduled to stand trial in October. If convicted, they face prison terms of up to 30 years.

Former Economy Minister Zafer Çağlayan and Aslan are charged with "conspiring to use the U.S. financial system to conduct hundreds of millions of dollars' worth of transactions on behalf of the government of Iran and other Iranian entities, which were barred by U.S. sanctions" between 2010 and 2015.

"First of all, we as Turkey have not made any decision to impose sanctions on Iran. We have bilateral relations with Iran, albeit sensitive relations. A portion of our oil and natural gas in particular from Iran. We have conveyed this to Washington, as well. I informed [former U.S. President Barack Obama] of this along with the other relevant authorities – particularly then-Secretary of State John Kerry. We told them, 'We cannot impose a sanction here [against Iran],'" Erdoğan said.

The president added that as a natural process of government, the economy minister is one of the authorities that follows up on these types of procedures.

"As such, the steps being taken against Aslan are purely political. The U.S. has to revisit this decision, which we will also have an opportunity to discuss in our upcoming visit," the president said, referring to his upcoming official visit on Sept. 18 for the U.N. General Assembly in New York.

"There are a lot of very bad smells coming from this business," Erdoğan underlined, adding that the cases against gold trader Zarrab and Halkbank's Deputy Manager Atilla are also motivated by similar political intentions.

Relations between Ankara and Washington have soured over U.S. support for the PKK terrorist organization's Syria offshoot, the People's Democratic Union (PYD) and its armed wing the People's Protection Units (YPG) in Syria which is currently supported by Washington. Ankara, on the other hand, has designated the PYD/YPG as a terrorist group, despite Washington declaring them the most effective partner in the fight against Daesh. Turkey argues that there is no difference between the PKK, which is listed as a terrorist organization by the U.S., the EU and Turkey, and the PYD/YPG.

Moreover, ties were further strained as a result of the lack of timely support shown by the Obama administration in the aftermath of the failed July 15 coup attempt in 2016, organized by the Gülenist Terror Group (FETÖ) led by Fetullah Gülen, who has lived in the U.S. since 1999. Ankara has also criticized Washington for the slow progress on Turkey's aim to extradite Pennsylvania-based Gülen, saying the U.S. is handling the situation based on political motives.

President Erdoğan also said that the recent indictment filed against his security personnel who accompanied him on a trip to Washington, coupled with the lack of adequate security measures taken by the U.S. during his latest visit to Washington, which resulted in a brawl between U.S. security officers and Turkish personnel, are part of what he called "bad-smelling business."

"What does that tell you? It speaks of the weak position of the U.S. administration. What I have mentioned has all been communicated to Washington. The U.S. may be a great nation, but it is another thing to be a fair state. This is where the problem lies. To be a fair state, your legal system must operate by the rule of law and justice. If your legal system is not functioning in a fair manner, these problems will frequently cause these bad smells," the president added.

During Erdoğan's visit to the U.S. back in May, supporters of the PKK triggered a melee outside of Turkey's embassy in Washington, D.C.

On May 16, the first fight reportedly broke out at the Turkish embassy when supporters of the terrorist group threw water bottles at Turkish citizens, triggering a 10-to-15 second scuffle in the middle of the road. Only two out of 10 of the U.S. police officers interceded in the fight. Later, when Erdoğan arrived at the embassy building, protesters continued their insults, shouted slogans and threw more bottles.

A grand jury on Aug. 29 indicted 19 people, 15 of which were Turkish security officials, in connection with the incident in Washington between protesters and Erdoğan's security personnel. In a statement, the U.S. Attorney's Office for the District of Columbia said that charges had already been brought against 16 of the defendants, and three more were later added to the list.

Meanwhile, a measure approved on Thursday by the Senate Appropriations Committee will block the U.S. government from supporting the sale of weapons to security forces protecting President Erdoğan.

The amendment was approved by the Senate committee in part of the ongoing U.S. response to the incidents in May.

Earlier this year, the Trump administration notified Congress of its intentions to allow a New Hampshire gun makers to sell $1.2 million in semi-automatic handguns and ammunition to an intermediary in Turkey for use by President Erdoğan's security forces. An official familiar with the administration's plans said the sale has been shelved indefinitely.