Erdoğan: S-400 is a done deal, down payment already transferred to Moscow 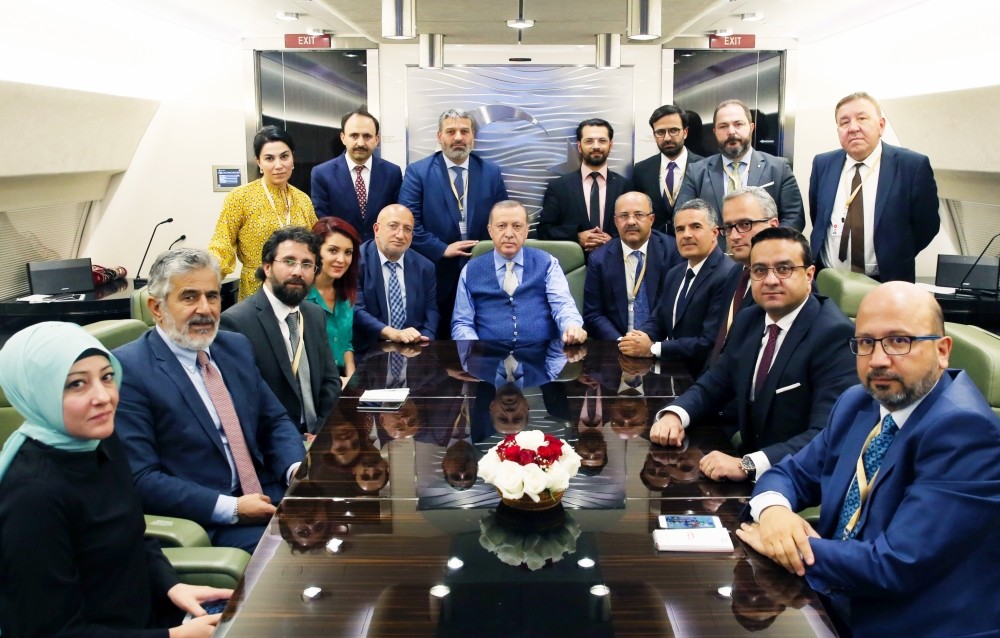 President Erdou011fan said a lack of cooperation from allied countries in defense pushed Turkey to produce its own both unarmed drones and armed drones.
by Ali Ünal Sep 12, 2017 12:00 am

As part of Ankara's steps to improve its national defense systems and strategies, Turkey has made the down payment for the S-400 missile system to Russia, President Erdoğan said

President Recep Tayyip Erdoğan dispelled speculation on whether Turkey would give up ongoing negotiations with Russia for the purchase of the S-400 missile defense system due to pressure from NATO, saying that the first down payment for the missile system was already transferred to Russia. Speaking to journalists who accompanied him on a visit to Astana, Kazakhstan to participate in the Organization of the Islamic Cooperation (OIC) Summit, President Erdoğan asserted that allegations made by certain media outlets regarding Turkey's cancellation of the procurement process of the S-400 missile system do not reflect the truth.

"The S-400 missile system deal has already been signed by officials. As far as I know, the first installment was also transferred. This process will continue between Turkey and Russia. Both [Russian] President [Vladimir] Putin and I are determined to realize this deal," Erdoğan said on Aug. 10 on his way to Astana. Highlighting that the steps taken by Turkey to improve its defenses and become more independent in terms of defense are not open for discussion, he said, "We make our own decisions regarding our independence and we are obliged to take the necessary measures in defense and security. If we're having issues in acquiring certain defense instruments and our attempts are met with obstacles, what we're going to do is simple; we will take care of ourselves."

Erdoğan reiterated that certain allies have been stonewalling Turkey's efforts to acquire missile defense systems, adding that similar hardships were also experienced during the acquisition of drones and armed drones.

"For instance, we were unable to acquire drones from our allies; they were demanding an exorbitant sum. We were not demanding that they do it for free, mind you. They provide tanks, armored vehicles and armament to terrorist organizations, yet do not allow us to acquire certain defense equipment. So, we started to produce our own drones and armed drones."

'We have no issues with the German people'

President Erdoğan also touched on relations with Germany, speaking about the future of Turkish-German relations after the upcoming elections in Germany and said that Turkey has no ill will toward the German people.

"We have no issues with the German people. Over three million Turks live in Germany and coexist in harmony with Germans. Our issue is with the faulty approach of German administrators and German officials. These approaches should cease to be. We have seen what they have done during the campaign process of the April 16 referendum. The Republic of Turkey will never compromise as long as they continue to attack us. We cannot accept Germany becoming an accomplice to terrorism," he said.

"As I have said, we have no issues with the German people, but rather with the officials. We are disappointed in them. They are engaged in an election process, and who wins or loses is not our concern. The elections are a German domestic affair," he added.

'No dispute between Russia and Turkey over Idlib'

Meanwhile, the president expressed the importance of the Sept. 14 Astana summit for the future of Idlib, asserting that they are retaining the process that was agreed upon with Russia.

"The process in Idlib is continuing, according to our previous agreement with Russia. There is no dispute between Russia and Turkey regarding this matter. There were no disputes in our meeting with Iran, either. I believe that the healthy contact between the countries will be maintained after the Astana summit. The developments have been positive," he said.

Regarding allegations on social media that he has talked with Bashar Assad, Erdoğan said that they were baseless and the product of ill intentions.

"I haven't talked with Assad and I don't intend to," he said.

Erdoğan was also asked about Iraqi Turkmens living in the region being prompted to migrate ahead of the Iraqi Kurdistan independence referendum.

"We wouldn't recommend our Turkmen brothers to relinquish their lands; they should stay on their own lands. I was recently visited by a Turkmen delegation that said they were born on this soil and that they will die on this soil. They said it is the will of their ancestors. I will never forget their emotional expressions. They added that they will do whatever they can," he responded.

Providing information about his visit to Kazakhstan, Erdoğan explained that the visit had four sections.

"First was our official visit to Kazakhstan, while the second was the OIC Science and Technology Summit we attended. Third, we attended the Astana EXPO 2017 focusing on energy. Then, we attended the Rohingya Declaration. I met with President [Nursulatan] Nazarbayev on the first day of the visit. During our meeting, we had the opportunity to talk about various subjects including bilateral trade, culture, military, the economy, politics and diplomacy. We have decided that the third High-Level Strategic Council meeting will take place in Turkey in early 2018," he said.

Erdoğan said that Muslim Rohingya fleeing Rakhine state were also discussed during the OIC summit, adding that a declaration was published as a result of Turkey's initiatives.

"We were able to meet regarding Rohingya as a result of our initiative. A declaration with 19 articles was published and was approved unanimously. I have explained this situation to all the leaders. I will also bring this issue to the U.N. General Assembly. I have explained the situation to President [Donald] Trump as well and told him that we want the U.S. to be sensitive toward this issue. After this talk, the U.S. secretary of state made some positive announcements about the subject. This indicates that they're becoming interested," he said.

Explaining that Turkey's aid to Rohingya will continue, Erdoğan said that this assistance will be procured from Bangladesh instead of sending provisions from Turkey.

"We are taking many factors into consideration. For instance, we decided not to send food, clothing or medicine from Turkey, but instead procure them from Bangladesh in order to contribute to Bangladesh's economy. I also conveyed this to the president of Bangladesh. We have procured 1,000 tons of aid supplies, which are being distributed there," he said.

"In the second phase, there will be a procurement of 10,000 tons. We will continue to provide assistance there. I have also talked with the president of Iran. I have asked him for cooperation and he responded positively. He said that we should first try to resolve this issue with the Myanmar administration and that we could talk with the Bangladesh administration if we are unable to do so with Myanmar. I hope we will be able to find relief for this tragedy soon, if not resolve it completely," the president added.

Meanwhile, Erdoğan also spoke of his contacts during the OIC summit.

"I have conducted bilateral discussions in meetings with the presidents of Pakistan, Iran, Afghanistan, Bosnia-Herzegovina, Venezuela, Bangladesh, Uzbekistan, Guinea and Guinea Bissau. Thus, I have realized a total of nine bilateral discussions with presidents. I hope this summit will yield beneficial results, especially with its declaration," he said.

Erdoğan also talked about his phone call with Trump that took place while he was in Kazakhstan. Explaining that they discussed the improvement of bilateral relations, Erdoğan said, "We underlined that our countries are strategic partners and this should be reflected in our relations. In addition, we talked about regional issues along with Myanmar. I have expressed the U.S.'s sensitivity toward the human tragedy being experienced by the Rohingya people and its importance. We have also decided that we should talk about these issues face-to-face during the U.N. General Assembly."