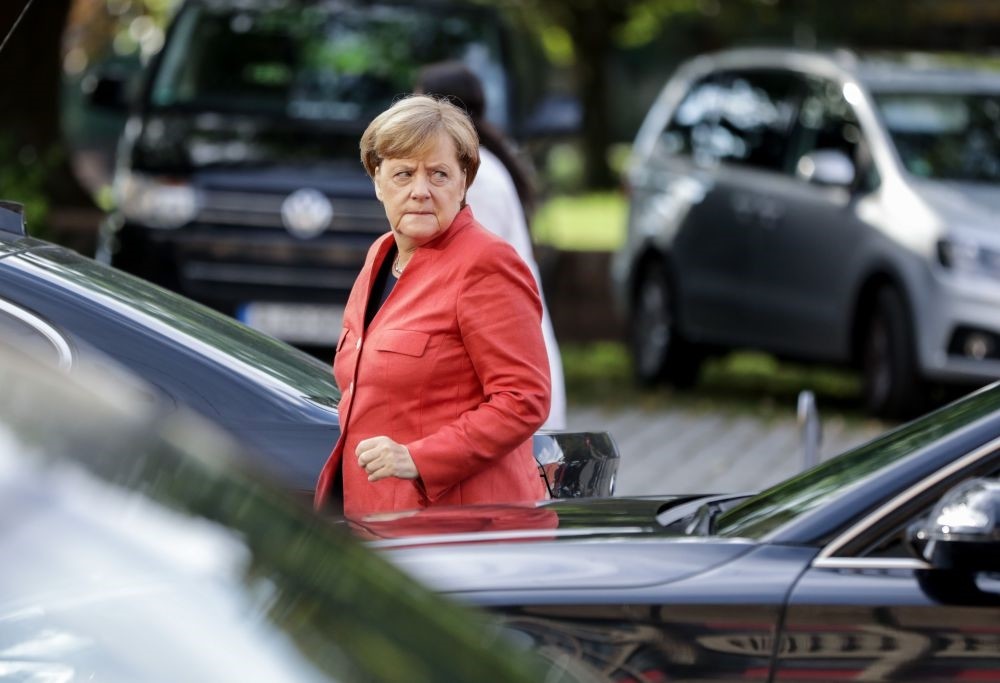 Escalating her anti-Turkey stance German Chancellor Merkel said recently that she will call on the EU states to discuss future of ties with Turkey in October.
by Daily Sabah Sep 12, 2017 12:00 am

German Chancellor Angela Merkel's statements regarding the ending of Turkey's EU accession talks have recently stirred a debate both within her Christian Democratic Union (CDU) and the Christian Social Union (CSU). Volker Kauder, the leader of Merkel's conservative parliamentary caucus, said in a televised interview that accession talks with Turkey should not be halted, rather calling for further intensification of the talks. Defying Merkel's assertion, Kauder said: "We must say to [President Recep Tayyip] Erdoğan 'we want to talk to you about these issues - the freedom of religion, the rule of law and human rights.'"

We know that Turkey has significant problems in these areas. If Erdogan says 'no,' then he has made [his] decision."

Kauder also suggested that the Cypriot issue should be discussed with Turkey. "As long as the Cypriot question is not resolved, the talks will be difficult anyway," he said. The Turkish and Greek Cypriot sides have long been in search for a solution on the divided island and the deadlock prevents Turkey from opening or closing additional chapters with the EU.

Despite Kauder's argument for intensifying EU talks with Ankara, Chancellor Merkel said on Sept. 3 that "I don't see them [Turkey] ever joining [the EU], and I never believed that it would happen," she said during a televised political debate against the SPD's leader and political candidate Martin Schulz.

"We will also - and I will suggest that this take place at the EU meeting in October - discuss future relations with Turkey, including the question of suspending or ending talks on accession," Merkel added.

As the German chancellor's attitude toward Turkey draws criticism even within her own party, the CDU's sister party the CSU is also engaged in the discussion. Joachim Hermann of the CSU said the accession talks should be immediately halted. "The red line for membership negotiations has long been crossed and I think that membership negotiations with Turkey should be ended."

The German chancellor's remarks on live TV sparked debate within the EU, as well. "We are continuing to talk with Turkey," EU Foreign Policy Chief Federica Mogherini said during the 2017 Bled Strategic Forum. "We do not always agree on everything. There are some issues […] that are taking our positions very much apart, but talks continue."

Regarding the EU-Germany divide over Turkey, French President Emmanuel Macron last Thursday said Turkey remains a "vital partner" for Europe. Macron highlighted Turkey's significance in tackling the migrant crisis and the counterterrorism fight, adding that a split from accession talks should be avoided. Meanwhile, Greek Prime Minister Alexis Tsipras said on Sunday that ending accession talks with Turkey, as German Chancellor Merkel has proposed, would be "a tactical and strategic mistake."

Relations between Turkey and Germany, home to 3 million ethnic Turks, have been badly strained, particularly since the failed coup attempt a year ago against Turkey's democratically elected government by the Gülenist Terror Group (FETÖ). Turkey accuses Germany of harboring high-ranking FETÖ figures and soldiers linked to the coup attempt, in addition to supporting the activities of the PKK and the Revolutionary People's Liberation Party-Front (DHKP-C) terrorist groups in Germany.