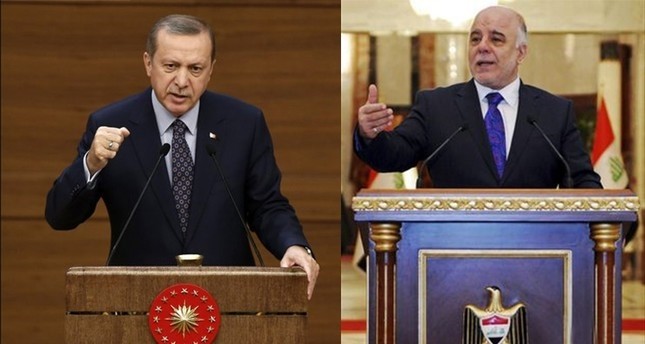 The two leaders emphasized the importance of protecting Iraq's sovereignty, warning that the KRG's insistence on holding the vote will increase tensions in the region.

Presidential sources said that Erdoğan and Abadi voiced their approval on Iraq's supreme court's order to suspend the referendum.

Turkey has numerous times reiterated its opposition to the KRG's decision to hold an independence referendum on Sept. 25.

Speaking on Sunday in Istanbul ahead of his departure to the United States where he will be attending the 72nd United Nations General Assembly, Erdoğan said Ankara will not allow such steps that could lead to the territorial division of Iraq.

"We say one thing: We have a 350-kilometer-long border there. We have kin there, co-religionists there. Same with them too. We are members of the same civilization. In other words, them being Kurdish, Turkmen or Arab and us on this side being Turkish does not separate us from each other. However, if this understanding is, unfortunately, aimed at dividing Iraq, then, we would not say 'Here, go ahead'," he said.

Erdoğan added that while Ankara's position has been relayed to the KRG numerous times, as there is a difference in the approach, the stance on keeping Iraq's territorial integrity has also been communicated to the central government in Baghdad. President Erdoğan will be meeting with Iraqi Prime Minister Haider al-Abadi during the summit in New York to discuss the referendum.

The Supreme Court of Iraq earlier in the same day ordered the suspension of the planned independence referendum by the KRG scheduled for Sept. 25.

KRG President Masoud Barzani had previously stated that the Iraqi parliament's vote that rejected the referendum and its decision to sack the governor of the contested Kirkuk region will not be implemented.