Squabble between Ankara, Berlin leaves Turks wavering ahead of elections 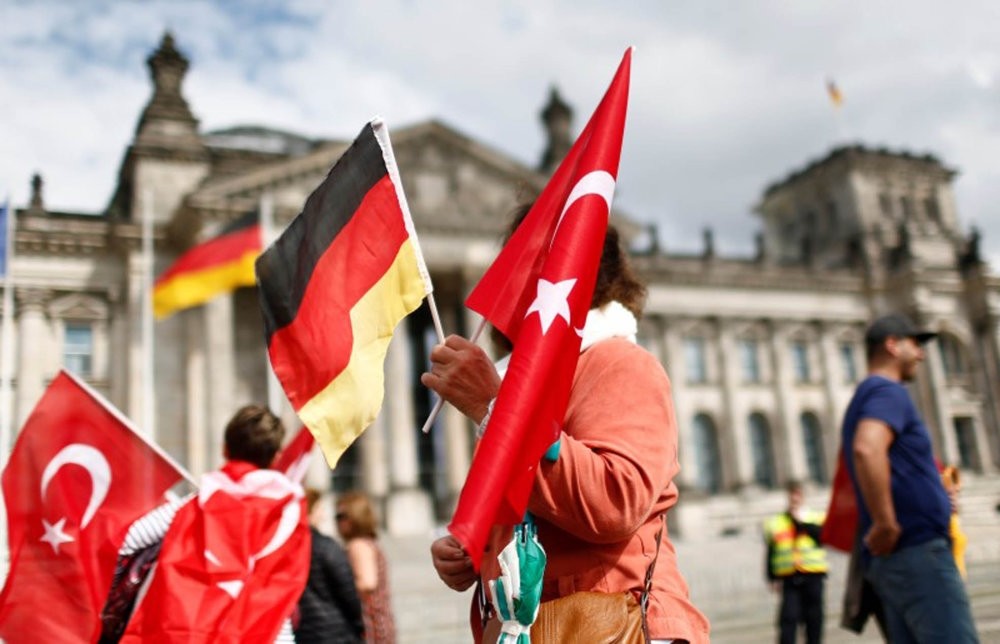 Recent research has exposed that the latest rift between Turkey and Germany has led to a shift in the political orientation of Turkish-Germans.
by Yunus Paksoy Sep 19, 2017 12:00 am

The diplomatic rift between Berlin and Ankara, coupled with German politicians' anti-Turkey rhetoric, has made Turks in Germany hesitant about who to vote for

Hopping on the subway from the center of Berlin, it takes less than 10 minutes to jump into another universe within the same city. The climate abruptly takes an unprecedented turn after climbing the stairs of the Kottbusser Tor train station. Istanbul Supermarket stands on the corner like a welcome sign as one gradually embarks on a new adventure, while a mixed-language with interchangeably used Turkish and German words emerge.

Kreuzberg, a district in the German capital city of Berlin, harbors thousands of families with Turkish roots. Wandering around the district, one must strive very hard not to bump into a person of non-Turkish origin. The streets are inundated with Turkish style coffee shops, kiosks and of course döner shops.

Having set out on a perilous journey to Germany decades ago as Gastarbeiter (Guest Workers), the Turkish community has enormously grown in numbers rather than recede in just a couple years. Today, three million Turks call Germany home though integration issues still loom.

More than 60 million German voters will head to ballot boxes on Sept. 24 to fulfill their duty by expressing their opinion in regards to who or which coalition should run the country for the next four years.

In such an ambiance, the Turkish community has not necessarily had to be too attentive in the election campaigns.

Until recently, the everlasting deteriorating ties between Turkey and Germany over the course of the last six months have dragged the community into the strife more often than not. News stories and TV programs on "how Turkey steers into authoritarianism" and "a dictator consolidates his power" have never vanished before the eyes of Germans and Turkish-Germans.

On the other side, President Recep Tayyip Erdoğan's recent call on his fellow citizens living in Germany to not vote for the enemies of Turkey on Sept. 24, namely Chancellor Angela Merkel's Christian Democratic Union (CDU), the Social Democratic Party (SPD), The Left (Die Linke) and The Greens (Die Grüne), baffled the already-mystified community.

In that community, Hamza Öztürk has had a remarkable past. Having moved to Germany more than 30 years ago, he made Kreuzberg his new home. Still feeling like an Ausländer (Foreigner), the café owner dreams of reuniting with his beloved Turkey.

"They [the Germans] have never liked us. They still make you feel like an outsider. 'You are dark in your minds,' they tell us," Öztürk said.

The 54-year-old is not eligible to vote in the upcoming elections because he is not a citizen. His children, however, are German-born and have passports.

"I have two sons. They will cast their votes next Sunday. I will have them vote for the ADD [Allianz Deutscher Demokraten] after our president told us to not vote for the others," he said.

The ADD has made a name for itself after the party hanged placards on streets emblazoned with Erdoğan's photographs. The party was founded by Turkish-Germans and follows a pro-Turkish agenda.

Not every Turkish-German is a die-hard Erdoğan fan. Orhan, 29-years-old, is an outstanding example. Making a living as a taxi driver, Orhan drives around with his dashy Mercedes-Benz on the streets of Berlin and wears a Beşiktaş [a Turkish football team] jersey all the time. As the conversation kicks off about the German elections, so does Orhan with his utterly harsh criticism of President Erdoğan.

"I do not listen to what Erdoğan says. Why would I? We owe a lot to the Germans. I will vote for the Left Party because I like what they have to say on the placards," says Orhan, adding that his friends sometimes denounce him for shielding the Germans. "But, as I said, we owe them a lot."

The rupture within the community has deepened in the recent period. Research by the Turkish European Foundation for Education and Scientific Studies (TAVAK) found that the latest enmity between Turkey and Germany led to a shift in the political orientation of Turkish-Germans.

The SPD, which used to be renowned for championing the rights of the working class until most recently, squandered the votes of citizens with Turkish roots. Backing for the socialist party dropped to 45 percent from a record 67 percent back in 1987, per the TAVAK survey.

Turkish-Germans have had a burdensome history in the country. Mustafa Yeneroğlu, a lawmaker for the Justice and Development Party (AK Party), has vivid memories. Born in Turkey and raised in Germany, the AK Party deputy lambasts Germany for alienating the community due to spats between the two states.

"A large majority of the Turkish community is no stranger to the alienation towards them by the great majority of German politicians in Germany," Yeneroğlu contended. "The difference nowadays is that the Turkish society, due to inter-state tensions, is portrayed and oppressed as the 'other'."

While the likes of Öztürk and Orhan stand firm on their sides as the elections near, there is another side to the story.

Yusuf, 27-years-old, was born and raised in Germany. Opting to converse in German rather than Turkish, he dives into the dilemma of whom to give an ear and what reaction to display with less than a week left.

"One feels lost between his emotions and logic," Yusuf says, exemplifying how a considerable number of Turkish-Germans feel.

The young programmer elaborated, saying, "Yes, you may feel proud and patriotic by not voting 'for the enemies of Turkey,' but we are living here not in Turkey."

The young Turkish-German falters for a moment, gazes high and heaves a sigh.

"I have to find who is the most suitable for the seat taking into consideration my prosperity and the welfare of my future children," he said.

The AK Party politician argues it is difficult for Turkish-Germans to find a party to vote "in terms of their own life realities and interests beyond the inter-state tensions."

Yeneroğlu believes issues troubling the Turkish community, such as voting in local elections, dual-citizenship, multilingualism, visa-free travel, the fight against xenophobia, sorting out the NSU case and putting an end to discrimination in social services, still loom.