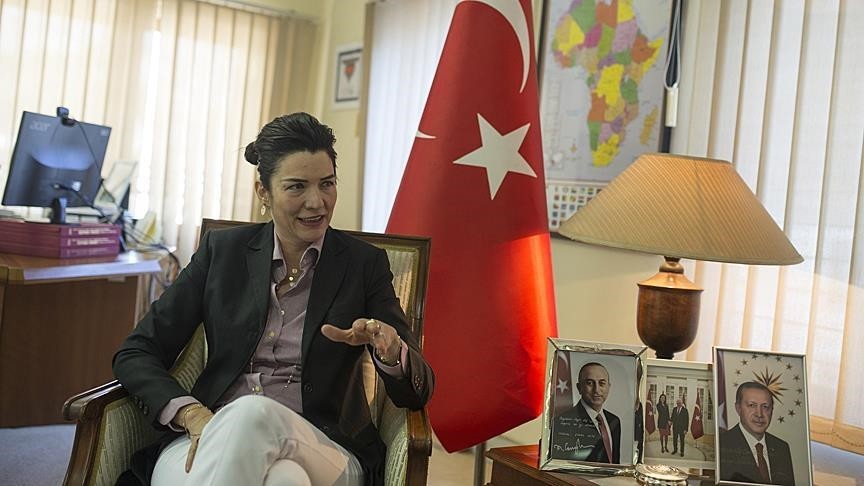 Turkey will soon open new embassies in Swaziland and Lesotho, as part of the country's policy of opening up to Africa, Turkish Ambassador to Pretoria said Wednesday.

"We have made the necessary diplomatic notifications and are waiting for procedures to be fulfilled," Elif Çomoğlu Ülgen, currently also accredited to Lesotho and Swaziland, confirmed to Anadolu Agency in an interview at her office in the South African capital.

Ülgen said the decision by the Turkish government to open up more embassies throughout the continent was part of its foreign policy priorities towards Africa with a view to boosting diplomatic and economic cooperation between Turkey and African countries.

"We see Africa as a very important partner, neighbor and a region. We also historically have had strong ties," she said.

The envoy added that the number of Turkish embassies on the continent had more than doubled in the past decade, increasing from 14 to 39.

She said upon instructions from President Recep Tayyip Erdoğan, Turkey would soon be represented in every African country.

"We look at Africa from a very African perspective and the motto is; we are for Africa and support African solutions to African problems," she added.

Ülgen also stated that Turkey had no colonial history in the African continent which gave it an opportunity to forge new relations.

"From a humanitarian and development perspective, Turkey has been engaged with the continent for the past decade," she said giving Somalia as an example, where Turkey has offered aid and funded its infrastructural development.

The ambassador also said many African students had benefited from Turkish educational scholarships.

"When these students come back to their countries they become ambassadors of Turkey," she said.

The diplomat further explained that the Turkish cultural center, Yunus Emre Institute in Johannesburg, was advancing cultural cooperation by teaching Turkish to South Africans and other nationals.

Referring to economic relations between Turkey and South Africa, Ülgen said the current trade volume of $1.5 billion was far below their expectations and the potential of entrepreneurs from both countries.

"As ambassador here, one of my important agenda items is that this figure should increase because this means more Turkish investments in South Africa," she said, also calling on South Africans to invest in Turkey.

The envoy said South Africa would be hosting in October an economic joint commission with Turkish officials which they hoped would address some of the challenges faced by entrepreneurs from both sides.

Ülgen said the commission would also discuss larger projects and joint investments between the two countries.

The diplomat also commented on the Gülenist Terror Group (FETÖ), accused of orchestrating last year's July 15 defeated coup in Turkey, which left 250 people dead and nearly 2,200 injured, and said the group had a presence in South Africa.

"FETÖ is present in South Africa like in some other countries in Africa. We know what they are doing, where they are and we have good dialogue with the South African government on that," she said.

The envoy recalled that the South African government was one of the first governments to react after the unfortunate coup attempt, adding Turkey was using diplomatic, political and legal channels to engage their counterparts on the issue.