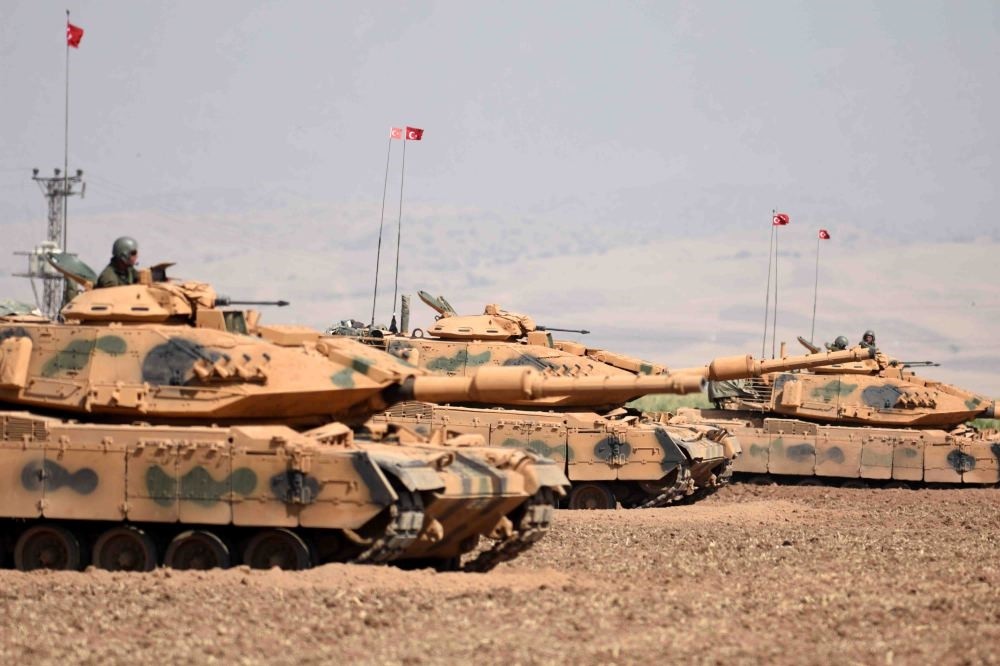 The military exercise on the Turkish-Iraq border that was launched on Sept. 18 continued Friday. The Turkish Parliament convenes Saturday for an extraordinary session and were expected to extend the military mandate for Iraq.
by Daily Sabah Sep 23, 2017 12:00 am

Turkey's government and opposition parties are hand in hand in opposing the imminent KRG referendum, describing the voting as a serious threat to Turkey's national security

With the Kurdistan Regional Government (KRG) due to hold an independence referendum despite negative reactions from the international community, the Justice and Development Party (AK Party), Republican People's Party (CHP) and Nationalist Movement Party (MHP) have joined together to oppose the vote.

During a live broadcast on Sept. 21, CHP Chairman Kemal Kılıçdaroğlu urged KRG President Masoud Barzani to act with common sense, saying that the referendum would further deepen problems in the Middle East. Kılıçdaroğlu said: "We support the integrity of Iraq and Syria," adding that a KRG referendum would spark an ethnic war in the region. CHP Deputy Chairman Öztürk Yılmaz also voiced his opposition to the referendum, saying that the KRG should annul the decision.

"If [Barzani] fails to step back … then the government should prepare a package containing military, political and economic measures [against the KRG]," Yılmaz said.

MHP Chairman Devlet Bahçeli spoke out against the upcoming referendum, as well, saying in a series of tweets on Sept.16 that Barzani should cancel the public vote. The he said that the KRG should cancel the planned vote, calling it an "existential issue for Turkey."

Turkey's Great Union Party (BBP) has also expressed discontent over the upcoming KRG referendum, with BPP Chairman Mustafa Destici saying that the poll would cause further conflict in the region. "If Barzani does not cancel the referendum, Turkey should close its borders [with Iraq], cut political and economic [ties] and consider military intervention," Destici said.

AK Party Group Deputy Chairman Bülent Turan said that the AK Party considers the referendum decision to be a security matter, adding that if the KRG does not cancel the referendum, the decisions taken by the National Security Council (MGK) will be put into practice. He also said that a referendum would not benefit the Kurds in the region, calling on the KRG to act with common sense.

'Military mandate in Iraq to be extended'

Meanwhile, Parliament will convene on Saturday, Sept. 23 for an extraordinary session to discuss the extension of the military mandate for Iraq and Syria. Parliament is expected to extend the mandate from Oct. 30 to Oct. 30, 2018, as Turkey's three main parties previously voiced their support for the extension.

The prime ministerial resolution on the extension of the mandate for on the cross-border operation to Iraq and Syria for one more year was presented to the Turkish Parliament on Friday.

"The risks and threats emanated from the latest developments and ongoing conflicts in the neighborhood regions near Turkey's southern border increasingly continue. Therefore, the right of taking necessary measures that stemmed from international laws against any kind of risks, threats and actions, such as making a fait accompli in Iraq and Syria, carries vital importance in relation to our national security," the resolution said.

Yıldırım said on Friday that the mandate for military action, which allows Ankara to deploy soldiers beyond the country's borders pursuant with international treaties, will be extended for one year.

Kılıçdaroğlu also said that his party will discuss the mandate for military action, reiterating that the CHP approved the previously issued mandate. "Our common objective is for Turkey to protect its power in the region," Kılıçdaroğlu said. CHP Group Deputy Chairman Engin Altay on Friday said that the CHP will support the military mandate to support the Turkish Armed Forces' (TSK) fight against terrorism.

MHP Group Deputy Chairman Erkan Akçay said on Thursday that the MHP will support the mandate for military action, saying that MHP deputies will be in full attendance in parliament to approve the mandate. MHP Chairman Bahçeli adjourned his party's Central Executive Board (MYK) meeting planned for Sept. 22, postponing it until Oct. 6 in order to analyze the referendum crisis in depth and wait for the MGK's resolutions to be presented.