US in no position to object to S-400 deal, says Erdoğan 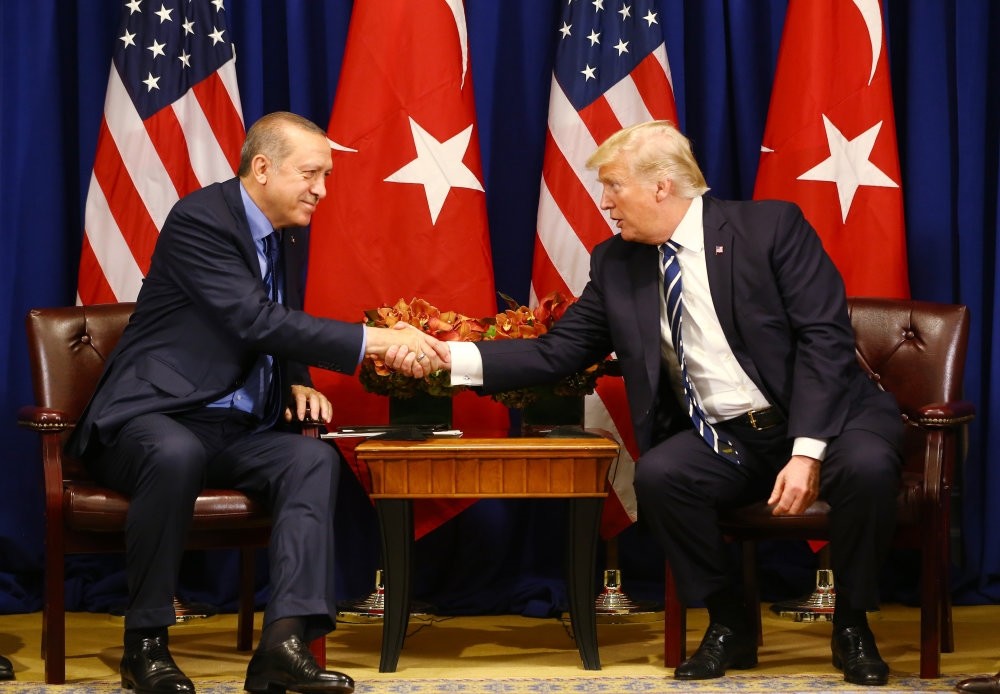 Erdou011fan said apart from Syria and Iraq, the talks had centered on Turkey's demand for the U.S. to play a more active against FETu00d6, responsible for last year's deadly coup attempt.
by Serdar Karagöz Sep 23, 2017 12:00 am

President Erdoğan said the S-400 missile system was a done deal and the U.S. was not in a position to say something about it. He added that if the U.S. Congress did not approve sales of Sig Sauer pistols to Turkey, the country will opt for domestically made weapons

President Recep Tayyip Erdoğan, speaking to journalists Thursday in New York before he boarded a flight back to Turkey, said the Russian made S-400 missile defense system Turkey pledged to purchase and paid a deposit had not even come up during his meeting with his American counterpart Donald Trump. He added, "And of course, there is this. If the U.S. is not in a position to provide us with a similar system, they can't say anything. For example, if there is no congressional approval for the sale of Sig Sauer to Turkey, no one can expect us to wait for them to change their minds. Our domestically made weapons are just as good. Atmaca and Sarsılmaz will satisfy our needs."

U.S.-made Patriots were also in the running but the American failure to accept a technology transfer precluded any deal. Erdoğan was in New York to attend the 72nd session of the United Nations General Assembly this week, returning back to Turkey on Friday where he headed the National Security Council (MGK) and cabinet meetings, expected to focus on Monday's independence referendum by the Kurdistan Regional Government (KRG) in northern Iraq.

The president said Trump had not felt it necessary to raise the S-400 matter during their meeting, and added that the missile defense system was a done deal. "We have already talked and settled it with Putin." Erdoğan and Putin are scheduled to meet next Thursday, Sept. 28, in Ankara.

When asked about the plan to purchase ballistic missiles, he said it was a scheme a few years back, at a time when he was the prime minister – before August 2014 – that was suspended because, despite the trust placed in the U.S. on the matter, American officials had disappointed them.

The president, who met with Trump a few hours before boarding his return flight, said apart from Syria and Iraq, the talks had centered on Turkey's demand for more active fight against the Gülenist Terror Group (FETÖ), responsible for last year's deadly coup attempt.

Erdoğan said the pastor, Andrew Brunson, was detained by a court order in İzmir and that the judicial process was continuing. Meanwhile, he said, the head of FETÖ, Fetullah Gülen, was enjoying life in a 400-acre compound in Pennsylvania. Turkey demands the extradition of Gülen, who is being tried in absentia by several Turkish courts for his leading part in the coup attempt.

"We submitted 85 boxes of documents and the American judiciary has done nothing. If they truly wanted to, they could [extradite him]. However, they, bafflingly, do not want to do so."

He said during the 45-minute meeting, Turkish-Iranian businessman Reza Zarrab, who is being tried in the U.S. on charges of violating sanctions on Iran, had come up, Erdoğan said, and so had the matter of indictment targeting his bodyguards for altercations with terrorist PKK sympathizers back in May. "Our justice minister will be following up on these matters."

Asked about the claims that FETÖ was strengthening its financial clout and was creating a diaspora in the U.S., Erdoğan dismissed such a scenario. "I don't believe it can happen. Unlike other diasporas, their strength does not lie in ethnic nationalism. They are retreating everywhere." He said once the sentencings begin, those FETÖ members overseas will realize the game is up.SILENCE ON ROHINGYA

"The world is unfortunately still silent of the fate of the Rohingyas. We held a meeting on the Rakhine Muslims at the U.N., where the president of Iran and I were the only ones who attended at the presidential level. The prime ministers of Pakistan and Afghanistan were also in attendance."

He said the way the matter was handled at the U.N. shows there was little global interest in resolving the tragedy. "The prime minister of Bangladesh [Sheikh Hasina] talked about allocating an island to the Rohingya people. It will be good if the Red Crescent and AFAD [the Prime Ministry Disaster and Emergency Management Presidency] send delegations there to survey the area. Let's see what we can do to relieve the people there."

Erdoğan said the KRG's referendum and developments in Syria were the focus of most meetings during his week in New York. His New York schedule was extremely busy, the president noted, adding that he had held more than a dozen bilateral meetings with world leaders, gave interviews to reporters. All meetings, including those with top businessmen, had provided positive feedback, Erdoğan affirmed.

"Another meeting that was of great importance was the one organized by the Turkish American National Steering Committee (TASC) where we met with the representatives of American-Turkish and Muslim American communities," the president said. He thanked organizers for the meeting, which had about 2,000 attendees and attracted representatives of Muslim communities from around the world.

During his phone conversation with Prime Minister Binali Yıldırım on the KRG vote, they had discussed calling for an emergency parliamentary session to discuss the matter. Parliament has the right to grant cross border operations.

"The northern Iraqi administration needs to think about what it will do too. The Iraqi constitution is clear. The referendum is illegal and invalid. Still, they resist. As far as I can see, the U.S. agrees with us."

He said meetings with Iranian officials were also important. "Iran thinks like us. We need to implement joint sanctions with Iran."

When asked why relations with KRG President Masoud Barzani had deteriorated when it was so good in the past, Erdoğan said: "If you are asking why relations with Barzani are at a breaking point, it is because of what Barzani did. At a time when they couldn't pay their state employees, we granted them $2 billion in credit. However, they show no gratitude. Neither Russia nor the U.S. have done for them as much as we have."

The land of the KRG was not home to Kurds only but also to Turkmens and Arabs, he said. "They put the Turkmen party center to fire. We see that some are losing their control."

He also criticized Israel for supporting the KRG's vote, advising Tel Aviv not to engage in policies that will harm bilateral ties.