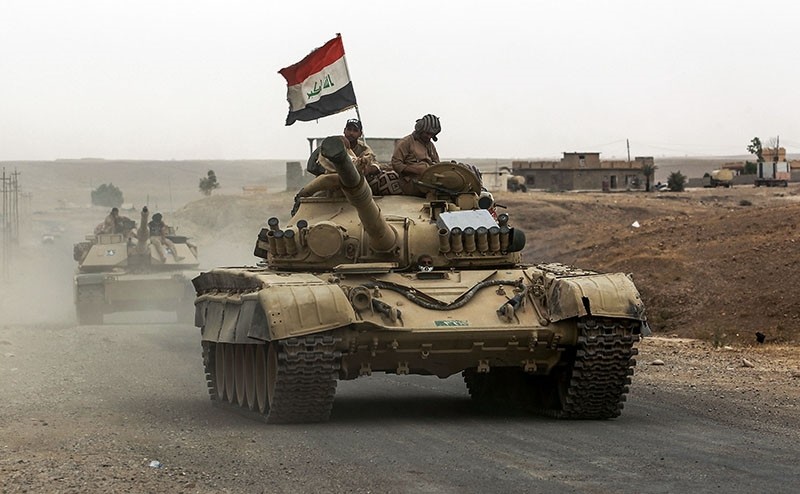 Iraqi soldiers ride atop the turret of a Russian-made T-72 tank near al-Sharqat on Sept. 20, 2017, where Iraqi forces backed by Hashd al-Shaabi paramilitaries are preparing to retake the Daesh-held city of Hawijah in of Kirkuk province. (AFP Photo)
by Daily Sabah with Agencies Sep 25, 2017 12:00 am

Iraq's parliament voted Monday to deploy military troops to oil-rich Kirkuk and other disputed areas with the Kurdistan Regional Government (KRG) as the controversial independence referendum is underway.

A written statement by the speaker's office said that the decision aims to protect the safety of citizens located in areas contested between Baghdad and Irbil.

Iraqi Prime Minister Haider al-Abadi also issued an order to security forces to protect all Iraqi nationals in the KRG from threats and violence.

Meanwhile the parliament also voted in favor of a motion addressing the KRG to hand over oil fields to the central government and suspending public servants who cast votes in the referendum.

Shiite lawmaker Hakim al-Zamili stated that the decision covers all public servants working in the military and other areas of bureaucracy.

Zamili said that the measures will force Baghdad to act "to protect Iraq's unity and to deploy troops in all areas" where they were before the 2014 blitz by the Daesh group.

The oil-rich Kirkuk province is cited to be among the disputed territories between the Iraqi central government and the KRG, which is defined in Article 140 of the Iraqi constitution, adopted after the U.S. invasion of Iraq and the toppling of Saddam Hussein. Accordingly, the administrative statuses of these areas were to be determined with referendums by 2007, but the referendums have not yet been held due to political turmoil in the country.

Although the countryside of Kirkuk is predominantly inhabited by Kurds, the city itself is predominantly inhabited by Arabs and Iraqi Turkmens. The region was subject to an Arabization policy during the Baath Party rule, but after 2003 this policy was reversed in favor of Kurds, prompting protests by the local Arab and Turkmen population and raising concerns in Ankara. During the Daesh terrorist group's advance in northwestern Iraq in June 2014, KRG forces assumed control of the city.