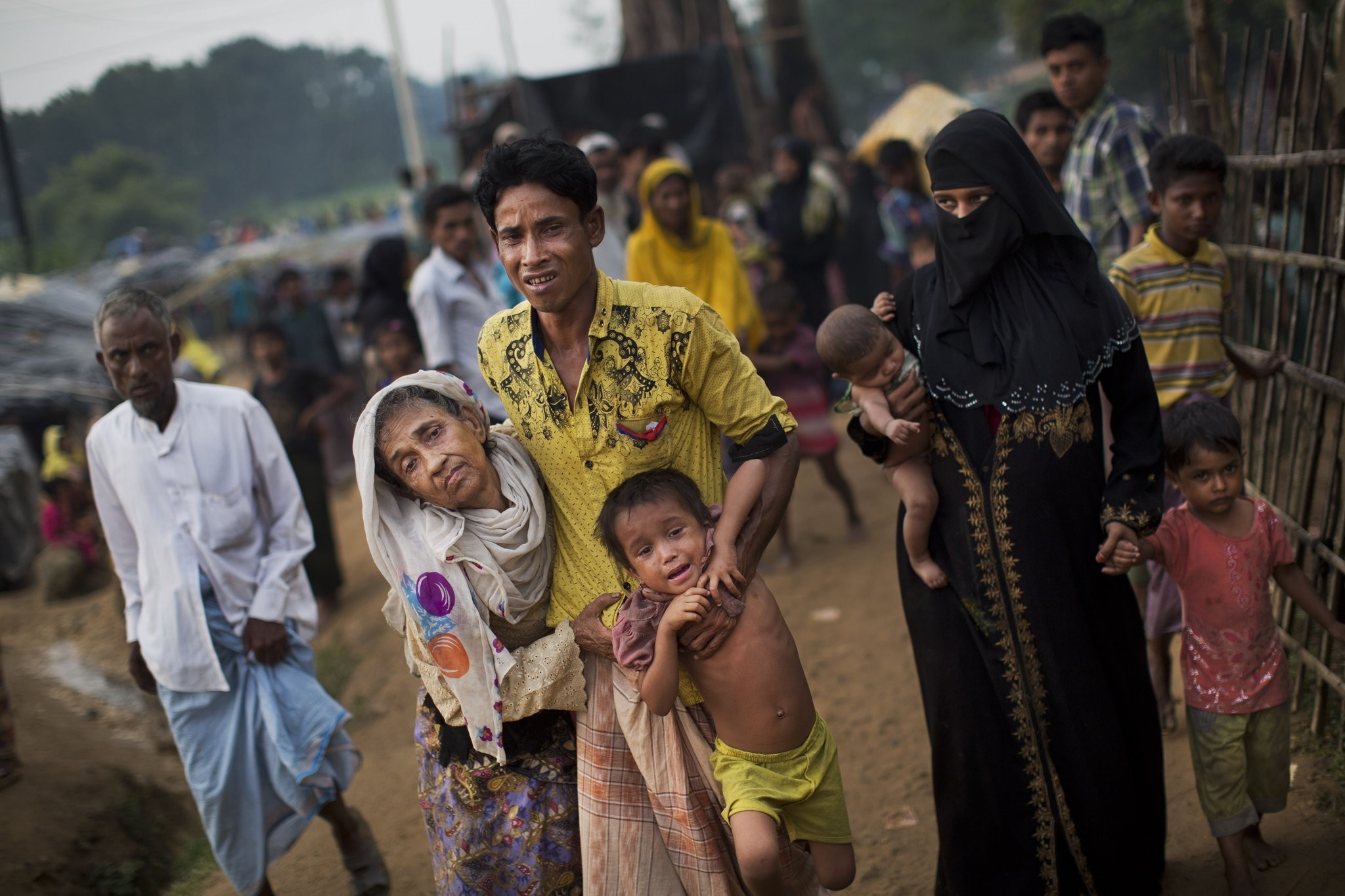 A Rohingya helps an elderly family member and a child as they arrive at Kutupalong refugee camp after crossing from Myanmmar to the Bangladesh side of the border. (AP Photo)
by Daily Sabah with Reuters Sep 26, 2017 12:00 am

A senior Turkish official is set to visit Rohingya Muslims fleeing violence in Myanmar in the coming days, as Turkey steps up its aid campaign for hundreds of thousands of displaced people amid allegations that data on the number of people killed in Myanmar is not being made available

As Ankara mulls over the next steps to take in addressing the plight of hundreds of thousands of Rohingya Muslims fleeing persecution in Myanmar for Bangladesh, there are new plans to send a senior Turkish official to visit refugee camps along the Bangladeshi border with Myanmar in the coming days. Former Health Minister Recep Akdağ, who now serves as deputy prime minister, will visit camps in Bangladesh, according to the Turkish Foreign Ministry. The Ministry also said on Monday that data regarding the number of people who have been killed or displaced in Myanmar is still unavailable, as over 436,000 Rohingya Muslims have fled to Bangladesh since Aug. 25 amid violence in Rakhine state.

According to a statement released by the Foreign Ministry, Turkey has exerted efforts to reach an international consensus on what actions should be taken to end the conflict, facilitate the delivery of humanitarian aid and ensure a safe return of the Rohingyas to their homeland.

Turkish aid agencies are continuing efforts to deliver aid to Rohingya Muslims in both Myanmar and Bangladesh, according to the Ministry, which also announced that Deputy Prime Minister Akdağ is expected to visit refugee camps in Bangladesh in the coming days. The minister's visit will be the second high-profile visit by officials from Ankara to refugee camps, coming just weeks after first lady Emine Erdoğan and a number of high-ranking officials from Turkey's aid agencies personally delivered aid to the displaced Rohingya Muslims.

Turkey has been at the fore in providing aid to displaced Rohingyas and President Recep Tayyip Erdoğan has raised the issue with the U.N.

Rohingya Muslims, described by the U.N. as the most widely persecuted ethnic group in the world, have faced heightened fears of being targeted since dozens were killed in communal violence in 2012.

Myanmar has rejected accusations from the U.N. that its forces are engaged in ethnic cleansing of Rohingya Muslims, claiming the clashes began in response to coordinated attacks on security forces by Rohingya insurgents on Aug. 25.

"We call on Aung San Suu Kyi to meet the Rohingyas personally," U.N. officials said in a statement.

The implementation of promises by Suu Kyi to address the crisis, including her promise to hold the perpetrators accountable, is being called an "empty gesture" by the U.N., since so many Rohingyas had fled.

Suu Kyi is a Nobel Peace Prize winner whose government came into power last year in a transition after nearly 50 years of harsh military rule. While she has denounced accusations of human rights violations, international pressure on her is mounting and there are calls for her Nobel Prize to be withdrawn.

Suu Kyi has little, if any, control over the security forces under a military-drafted constitution that also bars her from the Presidency and gives the military vetoing power over political reform.