KRG will suffer from sanctions ahead, Erdoğan warns Barzani 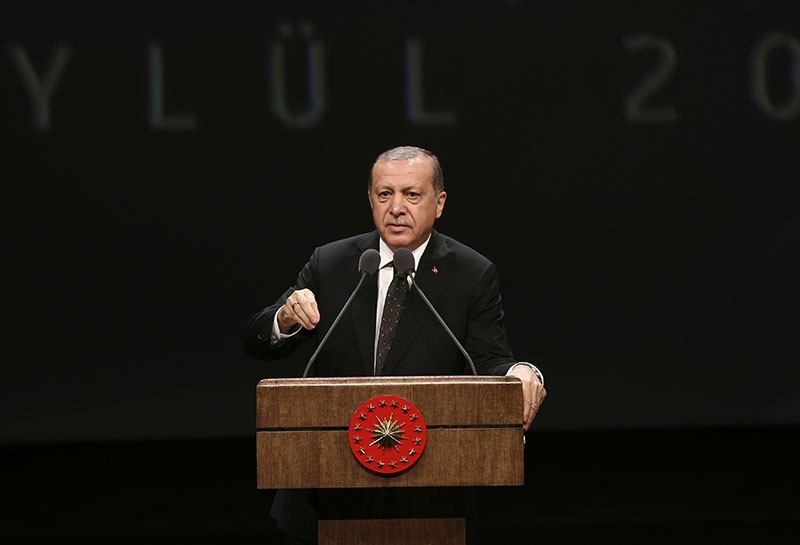 President Recep Tayyip Erdoğan warned the Kurdistan Regional Government (KRG) Tuesday that its independence aims may result in large-scale sanctions that would put the KRG in a helpless situation.

"You will be left in the middle anyway, from the moment we start implementing sanctions, it will be finished when we close a valve. All your income is gone. When the trucks stop going to northern Iraq, they will not be able to find food or clothing. That's what the situation will lead to. Why? We have to do this," Erdoğan said, adding that KRG's only supporter has been Israel when the rest of the international community is opposed the independence vote.

Ankara has said the Habur border gate with Iraq, which serves as the KRG's main gateway to the world, is only open for Turkey-bound traffic, and security measures have been tightened during crossing.

The KRG's decision to hold the referendum on independence from Baghdad has troubled its neighbors as well as the U.S. and the U.N. The regional government, led by President Masoud Barzani, has enjoyed close ties with Ankara and had used the pipeline stretching from northern Iraq to the Turkish Mediterranean port of Ceylan to export oil, a mainstay of the KRG economy.

Erdoğan said Turkey would initiate political, economic, commercial and security steps against the KRG while Iraq's central government has threatened to intervene militarily if the vote leads to violence.

"Turkey's power and capability is more than enough to deal with such threats. Our preference is to solve this issue through peaceful means. I want to underline that when these means are exhausted, we will not hesitate to use all our capacities," Erdoğan said, adding that nothing is off the table, including economic sanctions as well as air and ground military options.

Ankara recently launched a military exercise across the border from Iraqi Kurdistan. Iraqi troops and Turkish troops also started a joint exercise in Silopi, in southeast Turkey, on Tuesday.

Erdoğan also called on Israeli authorities to revisit their decision to support the KRG independence vote. "If they do not revisit, we will not be able to take many steps we would have with Israel too." The president further criticized the KRG, saying there are numerous other minorities in northern Iraq other than the Kurds, and that their rights must be protected as well. Many of the Arabs and Turkmens in northern Iraq reportedly boycotted Monday's vote.

Reiterating Ankara's firm position on the protection of Syria and Iraq's territorial integrity, Erdoğan said that minority rights and choices in the region must be protected.

"A referendum was conducted in northern Iraq, and only supported by Israel. If the PKK is celebrating before the ballot boxes are even opened, there is no innocence or legitimacy there. This should be known as that. The results are also shady in this referendum, which how and under what conditions it was conducted, is unknown," he added.

The demographic records of northern Iraq, particularly those of Arabs and Turkmens, have been reported as unhealthy or knowingly destroyed. Drawing attention to the issue, Erdoğan also said the demographics have been changed in the region, adding to the "illegitimacy" of Monday's vote.

Ankara has recently been in close contact with Baghdad and Tehran over the KRG referendum and measures that would be taken. In addition, Ankara has called on Barzani to give up on independence, as it claims it would drag the region into further chaos and conflict. Ankara also considers the KRG independence move as a national security threat.

Calling on Barzani to not become the trigger of chaos, Erdoğan said: "Those suggesting that divisions and becoming smaller is a good thing should start from their own lands first and set an example for the world. However, you would never see that. I call on all my brothers in Syria and Iraq, do not become part of such games. Do not let others play you. Those who fire you today will leave tomorrow. Do not forget, God willing, we will be living here together for thousands of years. Do not chuck away your tomorrow on today's greed. The waving flags of Israel there will not save you, you should know that."

Photos taken in Irbil showed some residents waving Israeli flags during celebrations. Israeli Prime Minister Benjamin Netanyahu was the only leader in the region to endorse the controversial referendum.