Ankara in search of alternative trade routes to Baghdad 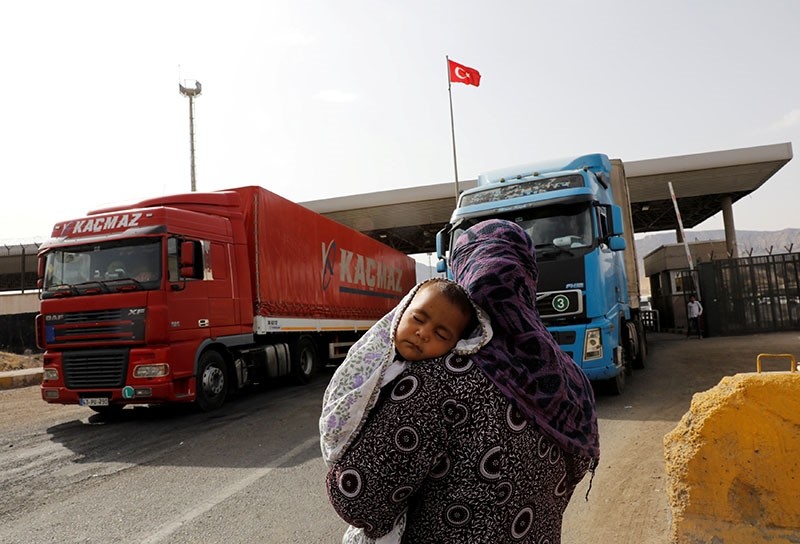 With the KRG having control over the Iraqi side, Ankara seeks alternatives for the Habur gate and to prevent any damage toward the country's trade relations with the Iraqi central government

Turkey's only border gate with Northern Iraq, the Habur gate, is about to lose its function despite remaining open in the wake of the Kurdistan Regional Government (KRG) referendum which has led to tense relations between Ankara and Irbil.

Turkish Customs and Trade Minister Bülent Tüfenkçi said yesterday that although the Habur gate is still open, it could be closed in the near future as Ankara seeks alternative routes for continuing trade with Baghdad, rather than the KRG.

Speaking to the A Haber news channel, Tüfenkçi said that there are some alternative options to Habur which include conducting trade via Iran using the Esendere border gate, or opening a new gate in Turkey's Ovaköy as well as sea and air exports.

Habur gate is the only gate that Turkey has with Iraq and it opens to the autonomous region of Northern Iraq. Since 95 percent of trade with Iraq is conducted by land, the gate is quite active. However, control on the other side of the gate is in the hands of the KRG. Despite being controlled by northern Iraq's government, three-quarters of trade capacity goes to the Iraqi central government and only one-quarter remains in the KRG.

"The Habur gate is open right now but we are seeing a decreasing number of vehicles passing through," Minister Tüfenkçi said, adding that this might be the result of security concerns. "Still," he said, "There is nothing that affects our overall trade negatively."

The International Transporters Association (ITA) announced that an average of 4,000 trucks enter and exit Turkey via the Habur border gate daily, exceeding the gate's capacity. The ITA said they are currently anticipating the launching of projects to alleviate the problem, expected to be implemented soon. However, according to sources from the Customs and Trade Ministry, there were 3,209 crossings through the gate per day last week, compared to 1,128 last Tuesday - one-third those of last week.

Previously, Tüfenkçi told the Sabah daily that the KRG's insistence in holding the referendum will have immense negative effects on the region, highlighting that Turkey will exert all possible efforts to prevent possible damage to bilateral trade relations with Iraq.

Speaking in a televised interview, Yıldırım said that the Turkish government would now only be in contact with the Iraqi central government regarding matters of oil, airports and borders, after Baghdad called on the region and the world to do so at a meeting held by its Security Cabinet.

He said economic, political, diplomatic and military steps are being discussed in retaliation to the referendum, warning that the independence vote will only worsen the existing chaos and instability in the country.

Due to the KRG's troubled relations with the Iraqi central government in Baghdad, it depends heavily on Turkey for many imports of products ranging from food to textiles and furniture. Turkey has built strong trade ties with the semi-autonomous region, which exports hundreds of thousands of barrels of oil per day through Turkey to international markets.

Turkey primarily exports flour, poultry and furniture to the region from factories in Gaziantep and Mardin in its southeastern region. Trade that is conducted via the Habur border gate, regarded as the KRG's gateway to the rest of the world, is of vital importance, as it is currently in an economic bottleneck.

A total of 2 million vehicles, including 1.4 million TIRs and an average of 4 million passengers are provided service at the Habur border gate annually. There are two X-Ray screening devices, one 3,500-square-meter commercial building and one 6,000-square-meter administrative building at the border gate, which also has 24 platforms, including 12 entrances and 12 exits.

Moreover, truck drivers transferring goods, including oil, between Turkey and the KRG say that closing the Habur border gate would have an adverse socioeconomic effect on their families, who rely heavily on employment in trade-related jobs for their livelihoods, truck drivers told Reuters. They also indicated that closing the border gate would have a profound impact on many business people, as many trucks carry goods from Istanbul and all around Turkey to Iraq via the gate.

Meanwhile, the region is also experiencing trouble in terms of water resources, according to a report recently published by Straftor, also known as "The Shadow CIA." Water resources for the region primarily come from Turkey, and Ankara could reduce the amount of water it provides to the KRG by controlling its dams.