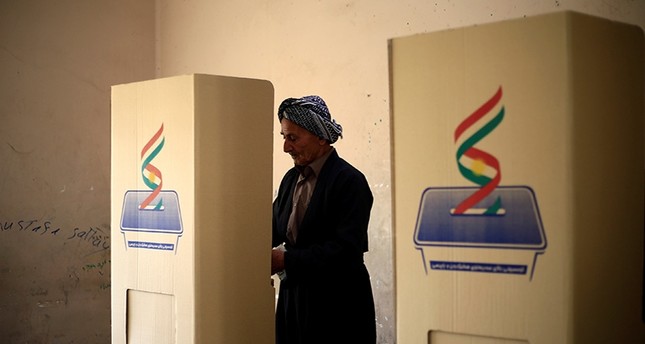 Ankara's harsh reaction and economic sanctions caused surprise in the KRG administration, as they expected a lighter response from Turkey regarding the independence referendum, a KRG official told Daily Sabah

The Kurdistan Regional Government (KRG) had not anticipated such a harsh and bitter reprisal from Turkey over the independence referendum on Sept. 25 as the latter warns that it has the means to mutilate the former with economic sanctions, a top KRG official told Daily Sabah.

The top KRG official, who is familiar with the issue between Ankara and Irbil, admitted that the Iraqi Kurdish administration had gauged a relatively milder reaction from the Turkish government in regards to the vote for an independent Kurdistan. "We did not expect this much," the high-level official said on the condition of anonymity due to restrictions on speaking to the media.

President Recep Tayyip Erdoğan said earlier this week that the KRG "will be left in the middle anyway, from the moment we start implementing sanctions, it will be finished when we close a valve." The president warned Irbil that the people of the KRG would not be able to find food or clothing.

"When the trucks stop going to northern Iraq, they will not be able to find food or clothing. That's what the situation will lead to. Why? We have to do this," said Erdoğan, sending Ankara's most stern signal yet.

The KRG official underlined that the independence referendum is, in no possible way, supposed to threaten Turkey. "This [referendum] has nothing to do with Turkey. Our opinion of Turkey is different, our relations with Turkey are different," said the official with bewildered eyes, indicating that the Turkish reaction has been too belligerent.

While economic sanctions, including shutting Habur border gate and closing off the KRG's oil trade, remain on the table, the news of the Turkish Armed Forces (TSK) kicking off a military drill at the Iraqi border landed like a bombshell two weeks ago. That being said, the inclusion of the Iraqi army in the drill doubled the astonishment in Irbil.

"Why would you conduct a military drill with the Iraqi army at the border?" the KRG official asked. Arguing that Ankara should not have taken such a step, the official lambasted the decision, saying: "Turkey should have done it with its own power alone if it wants to inflict fear."

Despite the military drill that occurred a couple hundred kilometers from the KRG capital, Irbil opts to retain composure. KRG Prime Minister Nechirvan Barzani told Daily Sabah in an exclusive interview Wednesday that he does not "think that such a thing will take place."

"The military drills are being carried out within the Turkish borders," the Iraqi Kurdish prime minister said without further elaboration.

As the military option seems relatively unlikely, economic sanctions are capable of stinging the KRG. The Iraqi Kurdish autonomous region relies entirely on oil trade, which means selling 600,000 barrels a day to survive. The focal point of the crisis for the KRG is, indeed, the fact that roughly 550,000 barrels of the 600,000 are transferred through Turkey.

Furthermore, more than 50,000 Turkish people do business in the KRG, pumping investments and money into the heart of Irbil. Supermarkets and bazaars are filled with either Turkish made products or products carried all the way across Turkey to the KRG.

The senior KRG official admitted that economic spat with Turkey would torment the welfare of the people of the autonomous region. KRG Prime Minister Barzani agrees. "It will definitely have a [negative] impact on the people," he said.

Share on Facebook Share on Twitter
Previous in Diplomacy Regarding the agreement, Kremlin spokesman Dmirty Peskov said, "No... Next in Diplomacy Turkey and Russia are on the same page regarding the territorial integrity...
DAILY SABAH RECOMMENDS