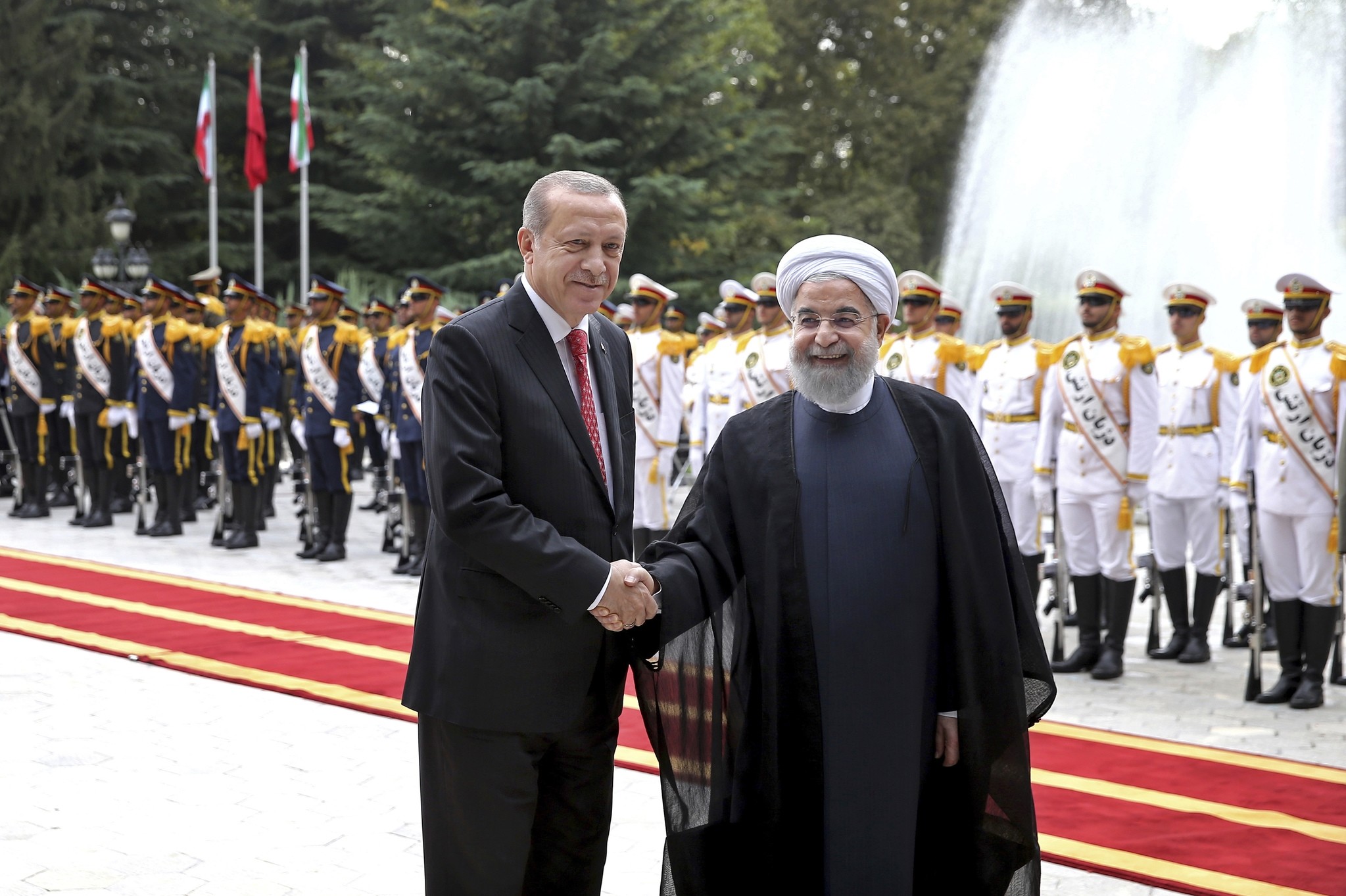 Ankara and Tehran share a common stance on recent developments in Iraq and Syria and that both governments do not recognize KRG’s independence vote, President Erdoğan and his Iranian counterpart Rouhani said in Tehran

The presidents of Turkey and Iran Wednesday indicated that their countries share a common stance on developments in neighboring Syria and Iraq, particularly on the recent referendum held in northern Iraq by the Kurdistan Regional Government (KRG), establishing de-escalation zones in Syria and also on counter terrorism.

President Recep Tayyip Erdoğan arrived in Tehran with a high-level delegation Wednesday on an invitation from Iranian President Hassan Rouhani.

In a join presser after a closed-door meeting in the Saadabad Complex, Erdoğan said that "all regional matters were on the agenda and discussed" at the meeting. Rouhani said: "Iran and Turkey, as two friendly, Muslim states, are the centerline of regional stability."

Rouhani spoke first at the press conference, saying: "Increasing the ethnic and sectarian separatism are the plans of outsiders," and that the efforts of Turkey, Iran and Russia, in trilateral cooperation, are needed for establishing peace in Syria.

Erdoğan said the de-escalation zones in Syria, establish under guarantee of Turkey, Iran and Russia, are of importance for Turkey, as they would help liberate civilians from terrorist groups such as Daesh. "During this process, our respective ministers, security forces and intelligence organizations are carrying out all kinds of work in the region," Erdoğan said.

After the sixth meeting of the Astana talks last month, Russia, Iran and Turkey agreed to jointly monitor a fourth safe zone around Syria's northwestern Idlib province. According to the plan, the trio is expected to send 500 observers each to Idlib to monitor the de-escalation deal, and the Russian ones will be military police, the Russian negotiator said after the meeting.

A convergence has evolved between Ankara, Tehran and the Iraqi central government following last week's illegitimate poll in KRG-controlled areas as well as disputed territories such as Kirkuk amid fears that the consequences of the vote may lead to greater instability in the region and disrupt war with Daesh.

The three countries warned Irbil to step back, against which the Iraqi armed forces launched military drills both with Turkey and Iran near the KRG border.

Both presidents drew particular attention to the regional developments in Iraq after the KRG independence referendum on Sept. 25, both asserting that the referendum was illegitimate and null and that Iraq's territorial integrity is important for regional stability.

"We have expressed that we do not recognize the illegitimate referendum by the Kurdistan Regional Government. With a 350-kilometer border in the north with Turkey, Iran along its east, the central government to its south and Syria to its west, what is the KRG holding the referendum on?" Erdoğan said, criticizing the KRG administration for holding the vote despite opposition from the international community. "There is no country, other than Israel, that recognizes them. A decision made with Mossad cannot be legitimate," he said.

Erdoğan added that Turkey sees the central government in Baghdad as the only legitimate authority in Iraq and that Ankara will continue to intensify measures against KRG.

The Iranian president also said that the "pressure is not desired," but KRG authorities must "correct their mistakes."

Erdoğan arrived in Tehran earlier in the day and he was welcomed at Mehrabad Airport by Iranian Industry, Minerals and Trade Minister Mohammad Shariat Madar, along with Turkish ambassador to Tehran Rıza Hakan Tekin and Chief of General Staff Gen. Hulusi Akar, who arrived in Tehran on Sunday for bilateral talks with his Iranian counterpart.

Both the Iranian and Turkish militaries launched exercises near the border just before the KRG independence referendum.