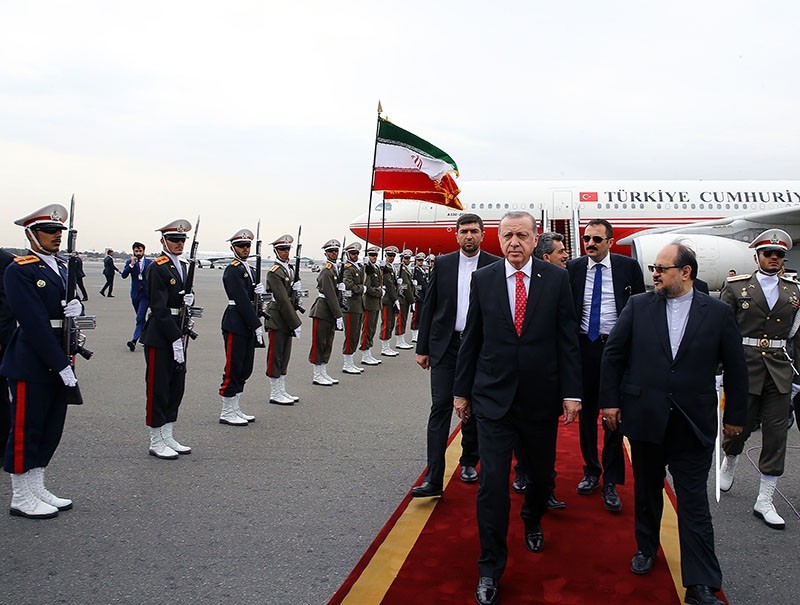 According to presidential sources, Erdoğan is scheduled to meet with his Iranian counterpart Hassan Rouhani and the country's Supreme Leader Ayatollah Ali Khamenei during his visit, which comes upon the invitation by Rouhani.

Erdoğan will also attend the fourth meeting of the Turkey-Iran High Level Cooperation Council in Tehran that is co-chaired by the presidents of the two countries. The meeting is expected to be dominated by talks on Syria's political transitional process and the possible joint steps that can be taken after the KRG referendum.

A convergence has evolved between Ankara, Tehran and the Iraqi central government following last week's illegitimate poll in KRG-controlled areas as well as disputed territories such as Kirkuk amid fears that the vote may lead to greater instability in the region and disrupt war with Daesh.

The three countries warned Irbil to step back, against which the Iraqi armed forces launched military drills both with Turkey and Iran near the KRG border. Two days prior to Erdoğan's visit, Turkish Chief of General Staff Gen. Hulusi Akar went to Tehran where he met his Iranian counterpart, Gen. Mohammad Hossein Bagheri.

At the joint press conference held after the two generals met at the headquarters of the Iranian general staff in Tehran, Gen. Akar touched upon counterterrorism and border security issues, saying Turkey and Iran have agreed to increase bilateral ties and cooperation in security related matters.

"Turkey and Iran have been two friendly countries with common values for centuries. Within these common values, we are improving our cooperation against existing threats and risks," Akar said.

For his part, Gen. Bagheri said that Turkey and Iran have developed a common stance against the KRG referendum.

Akar met with Rouhani after his meeting with Gen. Bagheri.

The Iranian President said relations between the two countries in terms of economy and foreign policy are in a good situation, and as "two deep-rooted Muslim countries in the region," they should increase cooperation in perspective of mutual interests against common threats.

"We should also exert to strengthen relations in military and defense areas," he said.

Erdoğan and Rouhani also will discuss the latest course of the Astana talks, which was initiated by Turkey, Iran and Russia, and aims to find a permanent solution on Syria's seven-year brutal civil war that has claimed more than 500,000 lives.

After the sixth meeting of the Astana talks last month, Russia, Iran and Turkey agreed to jointly monitor a fourth safe zone around Syria's northwestern Idlib province. According to the plan, the trio is expected to send 500 observers each to Idlib to monitor the de-escalation deal, and the Russian ones will be military police, the Russian negotiator said after the meeting.