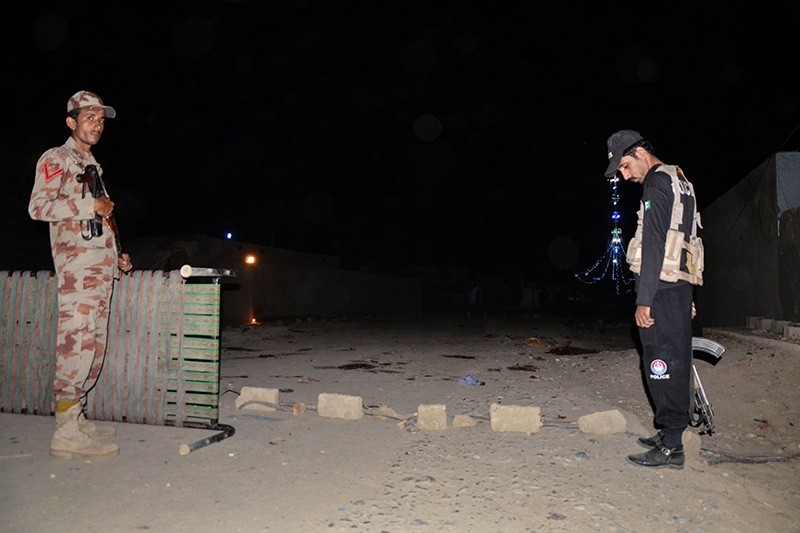 A Pakistani security personnel (L) and a policeman stand guard at the site of a suicide attack, outside a Sufi shrine in Jhal Magsi district in Balochistan province, on Oct. 5, 2017. (AFP Photo)
by Daily Sabah with AP Oct 06, 2017 12:00 am

The Ministry of Foreign Affairs released a statement condemning Thursday's terror attack that killed 20 at a Shiite shrine in southwestern Pakistan.

"We learned with great sorrow that many were killed and more wounded due to a terrorist attack perpetrated against a shrine, in Jhal Magsi district of Balochistan province of Pakistan," the official statement read.

The attacker detonated his explosives vest when he was stopped for a routine search by a police officer guarding the shrine some 400 kilometers (240 miles) east of Quetta, the capital of Baluchistan province.

"We condemn this heinous terrorist act and wish Allah's mercy on those who lost their lives and a speedy recovery to the wounded, and convey our condolences to the Government and brotherly people of Pakistan."

No one immediately claimed responsibility for the attack. Anwarul Haq Kakar, spokesman for the provincial government, said the death toll could rise as some of the wounded were in critical condition.