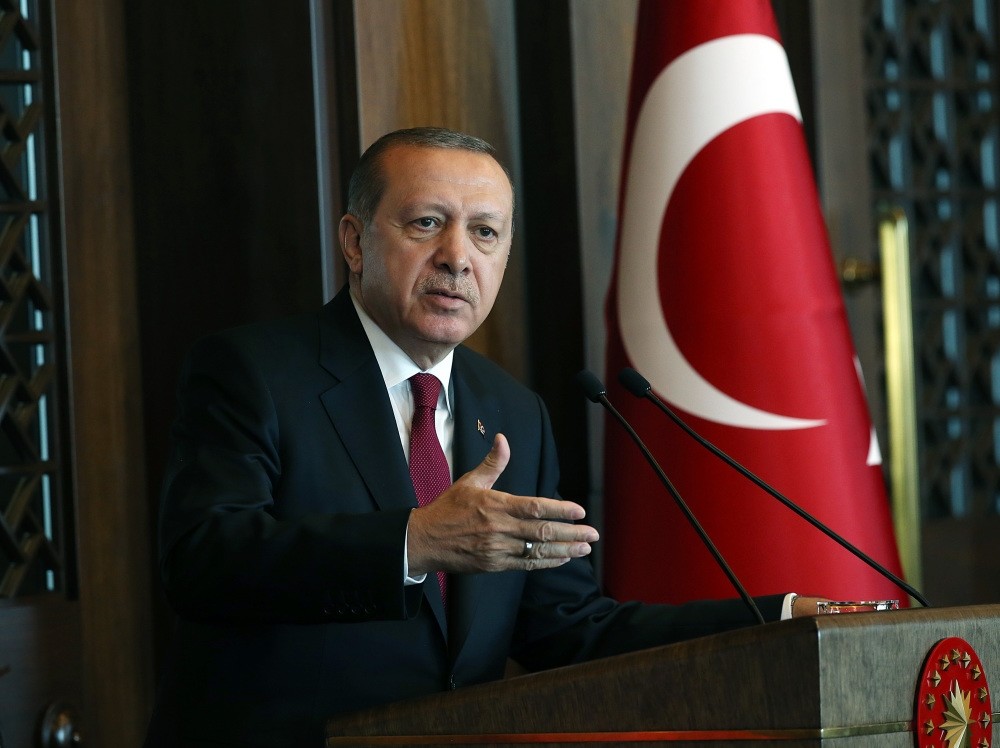 President Erdou011fan said yesterday that KRG President Massoud Barzani is following his personal ambitions in the independence bid, which is pulling the region into conflict.
by Daily Sabah Oct 06, 2017 12:00 am

In an effort to stabilize the regional turmoil, particularly in Iraq and Syria, President Erdoğan said Ankara, Tehran and Baghdad will take measures against the developments in the KRG, while Turkey will take joint steps with Russia and Iran for establishing a permanent peace in Syria

Ankara, Tehran and Baghdad will decide in a trilateral agreement on joint measures against the Kurdistan Regional Government's (KRG) Sept. 25 referendum on independence, President Recep Tayyip Erdoğan told reporters on his way back from an official one-day visit in Tehran on Wednesday.

He added that Turkey, Russia and Iran are taking steps on Syria developments in trilateral coordination, particularly on de-escalation zones and developments in Idlib province.

"We will not allow a terrorism corridor along our southern border. First, this was along northern Syria. I spoke about this with [U.S. President] Trump openly. If such a thing happens along our southern border, we will definitely intervene. Right now, the same goes for northern Iraq," President Recep Tayyip Erdoğan said, asserting that Turkey and Iraq need to be decisive powers in the region.

Reiterating Ankara's call to KRG President Masoud Barzani, Erdoğan said that he must give up his ambitions and that "the only way is to cancel the referendum [results]."

"Drunken with the result of the referendum, he is not aware of what he is doing, what kind of steps he is taking. Ultimately, Barzani and his partners will give up on this work," Erdoğan added.

Commenting on measures that will be taken against the KRG, including halting gas transfers from the KRG, Erdoğan said Ankara, Tehran and Baghdad would make decisions together.

On Sept. 29, Erdoğan warned that Turkey could block KRG oil exports. "We'll see who the KRG will sell its oil to. Turkey is in control of the valve," he said, referring to the Kirkuk-Ceyhan oil pipeline that connects oil fields in northern Iraq to an oil terminal in the Mediterranean. Oil revenues are of crucial importance for the KRG's economy, which is suffering from high unemployment.

Criticizing the KRG's moves in Kirkuk, which is one of several disputed areas according to the Iraqi constitution, Erdoğan said no one could claim to be the owner of the province.

"We know very well that the Kurds have no legitimacy there. They are in a position of invasion there. However, the central government will now take steps on Kirkuk. We are continuing meetings with Iraq and Iran. Whatever steps are needed, all will be taken, for both Kirkuk and Mosul, as well.

In a speech yesterday with public opinion leaders in Ankara, Erdoğan claimed Barzani is pushing the region into chaos due to his personal ambitions, criticizing Barzani's remarks that Iraqi Kurdish independence has been his childhood dream.

Erdoğan said that once measures are intensified, the KRG will have no way out, including closing airspace to flights to Iraqi Kurdistan and closing the border.

Turkey will ensure security inside Idlib, Syria, and Russia will be in control of security outside of the province as part of de-escalation zones established during the last session of the Astana talks in Kazakhstan, Erdoğan told journalist accompanying him on the presidential plane.

After the sixth meeting in Astana last month, Russia, Iran and Turkey agreed to jointly monitor a fourth safe zone around Syria's northwestern Idlib province. According to the plan, the trio is expected to send 500 observers each to Idlib to monitor the de-escalation deal, and the Russian teams will be military police, the Russian negotiator said after the meeting.

"Russian President Putin was in Turkey. We discussed the details of the trilateral mechanism. We have a roadmap on this issue. With regard to de-escalation zones' borders, we have allocated duties both inside and outside of the province. Outside [Idlib province] will be secured by Russia and inside by Turkey, through which steps will be taken to ensure peace for the people there," Erdoğan said.

Erdoğan on Wednesday visited Tehran where he met Iranian President Hassan Rouhani and Supreme Leader Ayatollah Ali Khamenei. Both the Turkish and Iranian leaders indicated that their countries share a common stance on developments in neighboring Syria and Iraq, particularly on the recent referendum held in Iraqi Kurdistan, establishing de-escalation zones in Syria and also on counterterrorism.