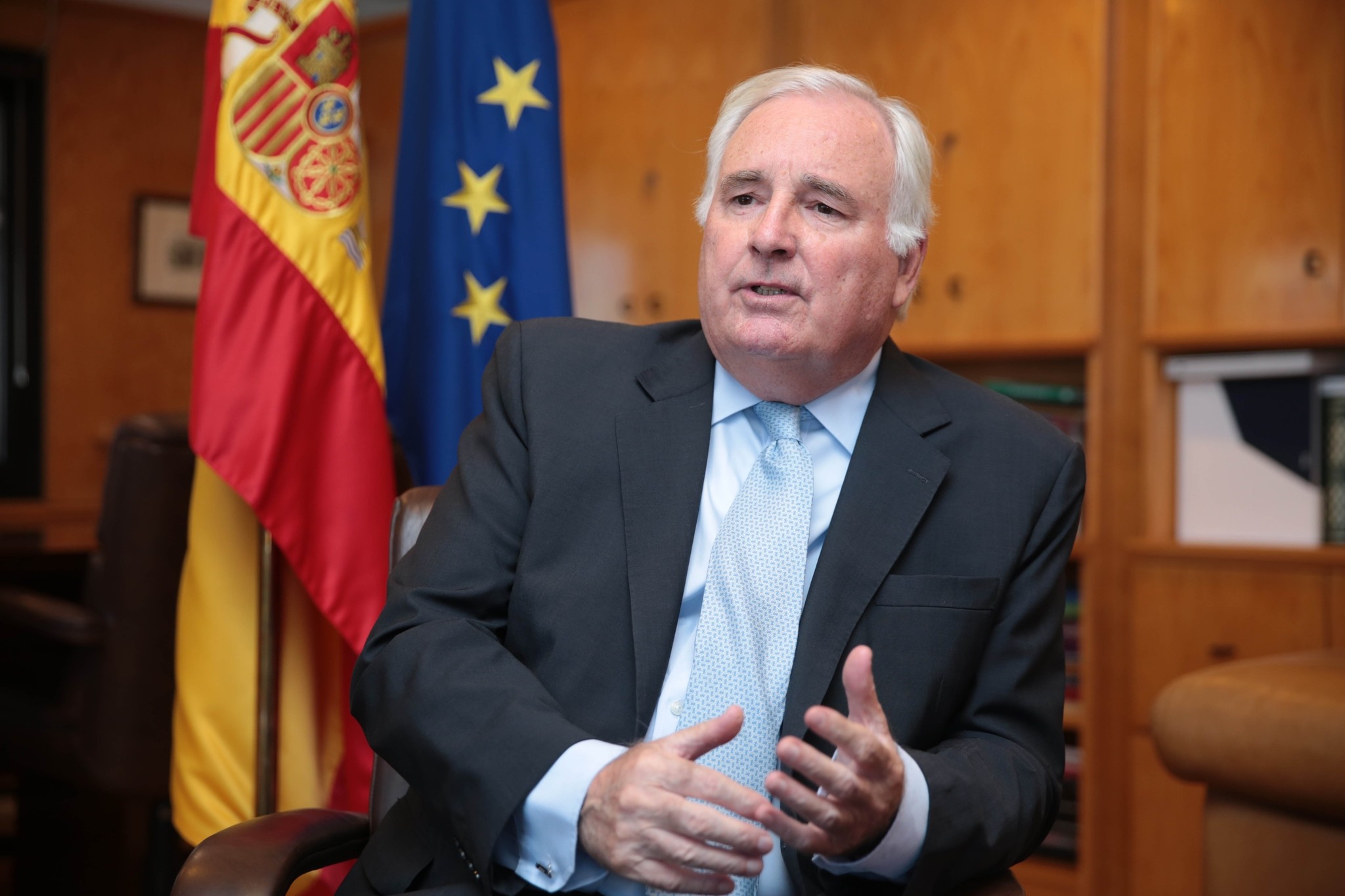 Spanish envoy Rafael Mendivil Peydro said the government will take all legal measures against Catalonia's independence referendum, which was a ‘clear violation of the constitution.' He added that Madrid has always been a supporter of Turkey's EU bid and they are not in favor of ending negotiations for Ankara's accession

Spanish Ambassador to Ankara Rafael Mendivil Peydro said Catalonia's "independence" referendum on Oct. 1 was a clear violation of the Spanish constitution and therefore it is impossible to accept a referendum.

Ambassador Mendivil underlined that the government of Spain is determined to take all legal measures at its disposal to put an end to the situation created by the Catalan authorities. Responding to criticism about the Spanish police's excessive use of power against protesters, the ambassador said the police's response to unlawful actions in support of an illegal act had been warned and was prudent and proportional.

Regarding some EU countries' calls to stop Turkey's EU accession talks, Ambassador Mendivil reminded that Spain has always been a supporter of Turkey's EU bid and underlined that his country is not in favor of ceasing dialogue and negotiations with Turkey in the context of its accession. 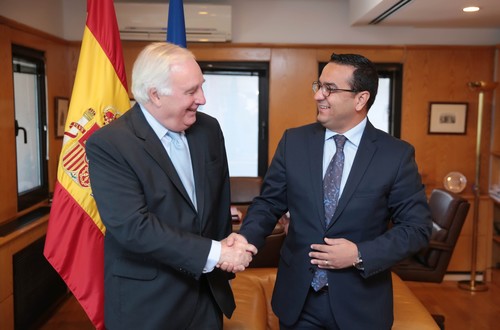 Daily Sabah: Spain has always been a supporter of Turkey's EU bid. How would you comment calls from some EU countries to stop the accession talks?

Rafael Mendivil Peydro: Spain has publicly left very clear and appropriate comments that it is not in favor of the cessation of the dialogue and negotiations with Turkey in the context of its accession to the EU. Our friends, the rest of the member countries of the EU, are familiar with our position and we hope that everything will move on to benefit both the EU and Turkey.

D.S.: As you know, the Catalan Regional Government held a referendum for "independence" on Oct. 1. How would you evaluate this referendum and the aftermath of it?

R.M.P.: It is important to underline that the vast majority of the people in Catalonia did not participated in this "so-called" referendum. The Catalan society has shown civism and respect for democracy and the rule of law by deciding, in its greater numbers, not to take part in that illegal consultation.

That so-called "referendum" approved and convened by the Catalan regional authorities was held in violation of the Spanish constitution, Catalonia's own Statute of Autonomy and the rulings of the Constitutional Court. Moreover, the so-called referendum was approved overriding the Catalan parliament's rules of procedure and, as a result, without any debate in the Catalan parliament, without listening and ignoring the rights of parliamentarians in the opposition, and thus in flagrant, permanent and deliberate violation of legislation, both national and regional, which does not grant competence to the Catalan authorities to convene a referendum. The so-called "referendum" on Oct. 1 was held without ballot boxes, without an electoral roll, with the possibility to vote at any location enabled illegally to the effect, and with the possibility to vote as many times as someone would want, as it has been highlighted in numerous cases. In short, it is impossible to accept its consideration as a referendum. It was an illegal and unconstitutional mobilization convened by those who did not have competence to do so knowing that it had been declared illegal and banned by the judicial authority. The Venice Commission of the Council of Europe has concurred with this view.

It is surprising that someone can take seriously Mr. Puigdemont's statements saying that Catalonia had "earned the right" to an independent state precisely as a result of systematic violations of the legal order, including Catalonia's own laws, the abuse of its historic institutions, and the deliberate commission of an illegal act. No one can earn the right to commit an illegality, as it is not earned, but it is committed, and in doing so you incur in the corresponding responsibilities (in this case very serious). The Spanish government has already declared it will take all legal measures at its disposal to put an end to the situation created by an irresponsible attitude of the Catalan authorities, which breaks the normal coexistence of Catalan citizens, not only between themselves but also with the rest of Spain.

D.S.: How would you respond to the criticism about the Spanish police's excessive use of power on Sunday against protesters and those willing to vote in the referendum?

During Oct. 1, the Spanish police forces complied with judicial rulings emanated from independent courts. Their actions were not directed against the freedom of expression or the right of demonstration of peaceful citizens. As a matter of fact, many people did indeed peacefully exercise these rights in different locations in Catalonia where mobilizations in favor of the consultation took place.

On the contrary, their aim was to protect the rights, freedoms and security of everyone in Catalonia and to prevent the celebration of the illegal consultation, as ordered by the courts and in accordance with the law.

Measures and actions were also adopted to prevent threats, pressures, and harassment suffered by those political leaders, civil servants, common citizens and journalists that did not want to participate in the illegal process, including the unacceptable use of schools and children to promote the consultation.

The police response to unlawful actions in support of an illegal act had been warned and was prudent and proportional. No one can pretend that the forces of law and order must remain passive and inactive while a decidedly illegal and unconstitutional act is taking place and the rights of the citizens are being violated, otherwise the police forces would then be themselves responsible for disobeying court orders and unfulfilling their duties.

We must not fall into the trap of condemning, without careful analysis, some actions of the legitimate state security bodies in response to an illegal process and actions that aims to subvert the constitutional order and the national coexistence. It is noteworthy that many of the images that have circulated in some media and social networks correspond to police actions, even the Catalan police, in demonstrations that took place in previous years, and which now arise as carried out on Oct. 1. Among the 800 wounded claimed by the regional Catalan authorities, just two have been located in a hospital. And nobody talks about the more than 400 police officers assaulted in the course of the mobilization.

D.S.: Both Turkey and Spain have suffered from terrorism and separatists movements. In this regard how can our countries increase cooperation in the fight against terrorism?

Spain and Turkey are familiar with the scourge of terrorism which aims to break the unity of the States and divide their societies. For this reason, Spain is perfectly able to understand the Turkish feelings regarding the matter and feels absolute solidarity with them. Cooperation in the fight against terrorism between Spain and Turkey is exemplary and we constantly strive to improve it.

D.S.: What is the current level of cooperation between Turkey and Spain in the area of defense? There was a Turkish-Spanish joint Landing Platform Docks (LDP) project. Can you shed light on the recent developments regarding this project?

Cooperation between our countries must be considered as very good. The LDP project can be considered a quite clear example of this. The current collaboration between SEDEF from Turkey and NAVANTIA from Spain is progressing in accordance with the schedule and we will see the new flag ship sailing quite soon. Nevertheless, there are many other important collaborations that are currently taking place and, what is even more important, there are many areas where collaboration could be increased.

This was one of the main issues discussed during the last visit of the Spanish Ministry of Defense to Ankara. On Sept. 27, just one week ago, both Defense Ministries held a meeting in this capital where they stated the very good level achieved in terms of relationships and the will to increase collaboration in terms of the defense industry. Specific actions are currently underway, trying to identify new areas and projects to increase these collaborations.

Just to conclude this question, the current deployment of a Spanish PATRIOT battery in İncirlik should be mentioned. Bearing in mind that this is a mission fulfilled as a request made by the Turkish government to NATO, Spain answered positively the request by deploying this unit, offering outstanding capabilities in terms of anti-missile protection. As I said, not only in terms of the defense industry but also in terms of mutual support, relationships between Turkey and Spain should be considered as very good.

D.S.: Madrid and Barcelona stand out as the most attractive touristic destinations for many Turkish citizens. However, the Schengen visa costs them money and time in an excessive way. What is your stance toward granting Turkish citizens visa-free travel?

Spain is in favor of the liberalization of Schengen visas for Turkish citizens. In this respect, the issue depends on the fulfillment of all the agreed conditions - 72 points of which only just a few have not been accomplished by Turkey - to proceed with the mentioned liberalization that effectively prevents many hassles and expenses for Turkish citizenship. It will also be a good opportunity to suppress Spanish citizens' need for visa to entry into Turkey.

D.S.: Is there any other field that his excellency would like to add?

Spain is a democratic member of the EU, where the rule of law and the protection of human rights and fundamental freedom prevail. In Spain there is absolute freedom to express and defend any political idea provided that these rights are exercised respecting the law. The events that are taking place in Catalonia are of enormous seriousness and gravity and directly effect a peaceful and respectful coexistence, which is the foundation and basis of any society and the guarantee of the rule of law and freedom. Spain, as any other democratic country, will resort to its legitimate powers and means to ensure the constitutional order and the normal functioning of institutions in order to restore this situation and assure the prevalence of the rule of law as well as the self-government of Catalonia based on the constitution and the Catalan statute, as his Majesty the King, Felipe VI, pointed out in his speech on Oct. 3.