Erdoğan says US envoy Bass not welcome in Turkey 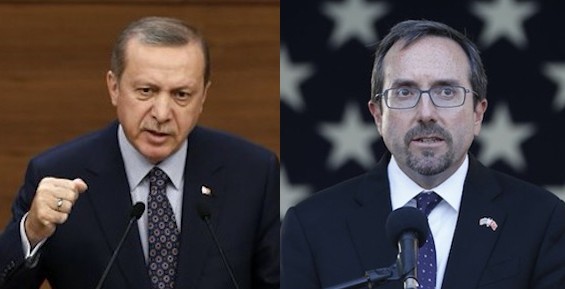 Amid the visa showdown between the two countries, Turkish politicians united against the U.S., condemning U.S. Ambassador Bass for his role in the crisis

President Recep Tayyip Erdoğan slammed the U.S. ambassador to Ankara John Bass Tuesday for his role in the suspension of non-immigrant visa services at the U.S. Embassy and Consulates in Turkey, which created a crisis between the two states, saying that he is not considered a representative of the U.S. He said that Turkish officials, including ministers, have not accepted farewell visits from the outgoing ambassador, adding: "Bass is not considered the representative of the U.S. anymore."

Erdoğan said that if a Turkish ambassador made a similar decision in the U.S., Ankara would immediately recall the envoy, noting that he finds it strange that the U.S. made the decision without having any discussions with the Turkish foreign minister. Speaking at a joint news conference with Serbian President Aleksandar Vucic in Belgrade, Erdoğan criticized the U.S.'s decision to suspend visa applications for Turkish citizens. He urged the U.S. to recall its ambassador in Ankara if he acted on his own in suspending visa services in Turkey. "There is nothing to discuss with the U.S. if the administration initiated the visa row," Erdoğan said, adding that if the decision was made by the envoy himself, then he should be removed from duty. PAGE 9

Amid the crisis, both the government and opposition have shown a common stance against the suspension of non-immigrant visa applications by U.S. missions in Turkey. The parties have agreed on the fact that what the U.S. has done is wrong and contrary to the alliance between the two countries.

He also said on Monday that the U.S. decision to suspend visa services at its missions in Turkey was "very upsetting." The move was made amid a diplomatic row that broke out due to the arrest of a U.S. Consulate employee over his alleged links to the Gülenist Terror Group (FETÖ).

Speaking about the arrest of the U.S. consulate employee at a press conference with his Ukrainian counterpart Petro Poroshenko in Kiev, Erdoğan said Turkey is governed by the rule of law and it is not "a tribe."

Erdoğan said he told foreign ministry officials that the Turkish Embassy in Washington should issue the same statement as the U.S. in accordance with the principle of reciprocity to halt visas from the U.S.

Prime Minister Binali Yıldırım said Tuesday that Turkey will not ask for permission from the U.S. to detain or prosecute suspects, as he criticized the NATO ally for suspending visa applications over the detention of a terrorist suspect.

Speaking at his party's weekly parliamentary group meeting, Yıldırım said that the U.S.'s attitude regarding the detention of a consulate staffer for alleged links to FETÖ, contradicts the spirit of alliance.

"There is rule of law in Turkey and if someone from the U.S. diplomatic mission commits a crime, they will not have any privileges [to avoid prosecution]," Yıldırım said, adding that U.S. authorities never asked for Turkey's permission when they detained a state-owned bank's deputy general manager.

He was referring to the arrest of Halkbank's deputy general manager of international banking, Mehmet Hakan Atilla, in the U.S.

He said that it was shameful for the U.S. to punish citizens of allied countries. He also added that Turkey retaliated in kind to their action.

"The issue needs to be immediately resolved," the prime minister said, adding that Turkey is open to all channels of communication with all countries.

Yıldırım also claimed that around 80 percent of Turkish citizens do not like the U.S. and that the U.S. has failed to cooperate with Turkey following the FETÖ-led failed coup last year. He also criticized U.S. support for the PKK terrorist organization's Syrian affiliate Democratic Union Party's (PYD) People's Protection Units (YPG).

"If the U.S. wants our partnership to continue then it needs to give up support for the YPG in Syria, who are the cousins of the PKK terrorists," Yıldırım said, adding that it is not befitting for "a partner to cooperate with enemies."

The chairman of the opposition Nationalist Movement Party (MHP) also said that the U.S. was causing a virtual crisis by suspending non-immigrant visa operations at diplomatic facilities in Turkey.

"The U.S. tried to cause a virtual crisis with lame excuses," Bahçeli said about the visa suspension.

Calling the U.S.'s move as "a scandal," he said that the tension between the two countries should not be projected onto their citizens.

"The decision, which is an abdication of reason, will just ... deepen the gap between the two countries," he said.

Similar to the MHP leader, te main opposition Republican People's Party (CHP) Chairman Kemal Kılıçdaroğlu also said that what the U.S. did was wrong and he does not support it.

"We [the CHP], definitely do not support what the U.S. did. Thousands of students, sick people and businessmen will go to the U.S. They are preventing all of them from doing so. They are not punishing the government, they are punishing the 80 million citizens [of Turkey]. The common sense should prevail and realistic policies should be produced. Both countries should act in a sensible way," Kılıçdaroğlu said, adding that he hopes for the crisis to be ended as soon as possible.

The U.S. Embassy in Ankara said Sunday that all non-immigrant visa services in its diplomatic facilities in Turkey were suspended after the arrest of one of its employees over alleged FETÖ ties.

A statement released by the embassy said: "Recent events have forced the U.S. government to reassess the commitment of the government of Turkey to the security of the U.S. Mission facilities and personnel."

Hours after the U.S. decision, Ankara said it had also halted processing visa applications from the U.S. The move, announced online by the Turkish Embassy in Washington, applies to visas in passports, electronic visas and visas at the borders, and is also effective immediately.

Metin Topuz, a Turkish employee who has worked in the U.S. Consulate in Istanbul since 1982, was arrested on charges of espionage and links to FETÖ, the group Ankara blames for the July 15, 2016 coup attempt that killed 249 people.

According to his indictment, the suspect was in contact with a number of former police chiefs in Istanbul where he worked, and all those police chiefs involved in the 2013 coup attempts were FETÖ members in the judiciary and law enforcement.

"The suspect acted as a liaison between members of FETÖ and its leader, Fetullah Gülen, who lives in Pennsylvania," the indictment adds, claiming there is strong evidence to justify Topuz's arrest.