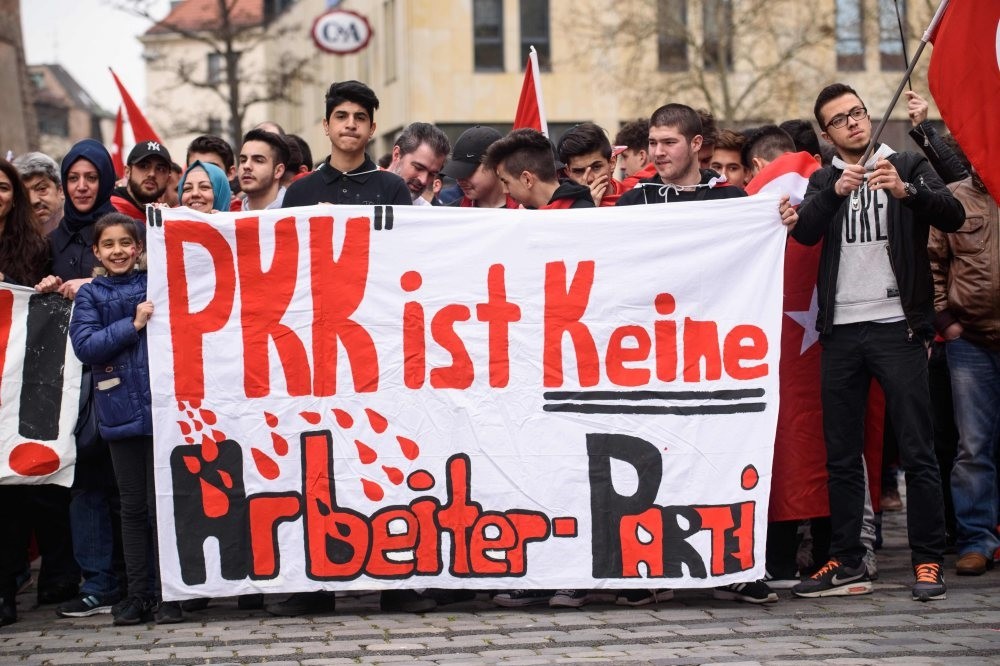 People hold a banner reading ,the PKK is not a worker's party, during the ,Peace March for Turkey,, organized by the new German Turkish Committee on April 10, 2016, in Nuremberg.
by Özgenur Sevinç Oct 10, 2017 12:00 am

Germany must take steps, including ending its tolerance for the PKK and FETÖ terror groups, before normalization between Ankara and Berlin can begin, experts told Daily Sabah

Experts say that Ankara is ready to normalize relations with Berlin and it would not leave positive steps unanswered if certain steps are taken, including ending support for the Gülenist Terror Group (FETÖ) and PKK.

"Turkey expects Germany to consider it a sovereign and equal ally and to end its support for terrorist groups such as FETÖ and the PKK in compliance with the requirements of the NATO alliance," Kemal İnat, an academic from Sakarya University, said.

As Germany is set to form a coalition government following its Sept. 24 elections, the new government's policies on Turkey and the future of relations have been widely discussed.

Enes Bayraklı, an academic from the Turkish-German University, told Daily Sabah that tensions decreased after the elections and that further steps Germany takes will play a significant role in the future of relations between the two countries.

Bayraklı further said there are two policies that Germany might follow regarding relations with Ankara. Berlin might pursue a policy of tensions with Ankara until the 2019 elections in Turkey or it might take steps that would contribute to the recovery of ties.

"If Germany distances itself from FETÖ and the PKK, that would be a positive step for Turkey," Bayraklı said.

Referring to Foreign Minister Mevlüt Çavuşoğlu's latest statement in which he said: "Turkey will take two steps if Germany takes one," Bayraklı said that Turkey is ready to normalize relations with Germany.

Relations have been strained between Ankara and Berlin due to a range of issues. Turkey has been criticizing Germany for condoning PKK activities and harboring terrorists who partook in last year's failed coup attempt while Germany criticizes Turkey on issues such as press freedom and human rights. Ankara has voiced dismay regarding what officials say is the negative attitude toward it.

The already strained relations between the two countries sank even deeper during the run-up to Germany's elections. Ankara repeatedly warned Berlin about using anti-Turkey rhetoric in their internal policies and said relations should not be sacrificed for the purposes of short-term objectives.

In a televised debate last month, German Chancellor Angela Merkel said she would discuss Ankara's accession talks with her EU partners while her rival Martin Schulz from the Social Democratic Party (SPD) said Turkey should not become an EU member. Referring to Turkey's EU talks, President Recep Tayyip Erdoğan stressed that Ankara will not be the one to throw in the towel.

Following the elections results, Merkel's Christian Democratic Union (CDU)/Christian Social Union (CSU) has been saddled with a difficult task to form a coalition as she secured a fourth term. While Merkel lost the support of many voters, the far-right Alternative for Germany (AfD) made remarkable gains, entering the Bundestag as the third-largest party.

As SPD has decided not to join coalition talks and remain an opposition party, the Jamaica coalition, including the CDU, Free Democratic Party (FDP) and the Green party appears more likely. In such a scenario, Cem Özdemir, co-chair of the Green party, could become the foreign minister of Germany.

Commenting on the issue, Bayraklı said: "If Cem Özdemir becomes the foreign minister, the crisis between the two countries might deepen further, as he acts as part of the Turkish opposition and has an ideological stance."

İnat said Green party policies, with its members bringing up Turkey's issues on the German agenda and adversely affecting Berlin's policies on Turkey, might add to the problems if it continues with the same approach when it shares a part of the government.

It is significant that possible coalition partner FDP could dissuade Germany, which is a trade country, from acting ideologically in its foreign policy, İnat added.

Highlighting that Ankara has never preferred relations based on conflicts with Berlin, Bayraklı said Turkey has to react to the negative attitude toward it. He reiterated that Turkey would not leave positive steps unanswered.