US should recall envoy if he's behind visa crisis, Erdoğan says 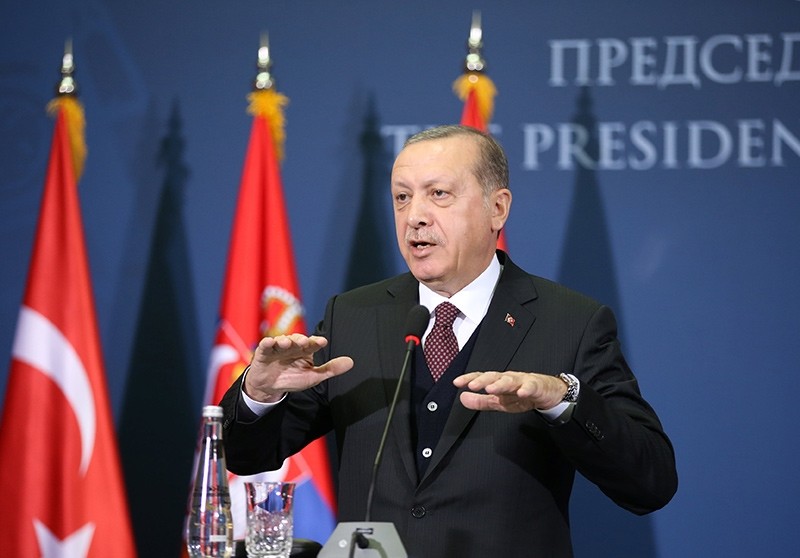 President Recep Tayyip Erdogan gestures as he speaks during a joint press conference with Serbia's President Aleksandar Vucic (not in the picture) after their meeting in Belgrade (Reuters Photo)
by Daily Sabah with AA Oct 10, 2017 12:00 am

President Recep Tayyip Erdoğan urged the U.S. to recall its envoy in Ankara if he acted on his own in suspending visa services in Turkey.

Speaking at a joint news conference with his Serbian counterpart Aleksandar Vucic in Belgrade, Erdoğan criticized the suspension of visa applications for Turkish citizens.

"There is nothing to discuss with the U.S. if the administration initiated the visa row," Erdoğan said.

The president slammed U.S. Ambassador John Bass and said that Turkish officials, including himself and ministers have not accepted farewell visits from the outgoing ambassador.

"We do not consider him as legitimate envoy of the U.S." he added.

Erdoğan said that if a Turkish envoy made a similar decision in the U.S., the Turkish government would immediately recall the envoy.

Outgoing U.S. Ambassador John Bass announced the visa suspension and issued a video on Monday discussing his decision, but there has yet to be any official comment from Washington.

"I personally find it odd that high-level U.S. officials did not conduct any means of communication with our foreign minister. It is concerning for an Ankara ambassador to take such a decision then claim he took it 'in the name of my country'."

Mentioning how the visa row followed Turkish authorities revealing the links a U.S. Istanbul Consulate local employee had with the Gülenist Terror Group (FETÖ), the group behind last year's defeated coup attempt in Turkey, Erdoğan stated that the presence of an additional FETÖ suspect working for the consulate "shows something's happening there."

"How did these spies infiltrate the U.S. Consulate? If they didn't infiltrate it, then who placed them there? We must ask such things.

"No state would allow such spies that could cause a domestic threat. Turkey is not a tribal state," Erdogğn said.

Metin Topuz, a longstanding U.S. consulate employee and a Drug Enforcement Administration (DEA) agent at the Istanbul Bureau, was arrested last week over alleged ties to the FETÖ.

The U.S. embassy in Ankara said Sunday that all non-immigrant visa services in its diplomatic facilities in Turkey were suspended after the arrest of Topuz.

Turkey retaliated by saying it has halted processing visa applications from the U.S. The move, announced online by the Turkish embassy in Washington, applies to visas in passports, electronic visas and visas at the borders, and is also effective immediately.