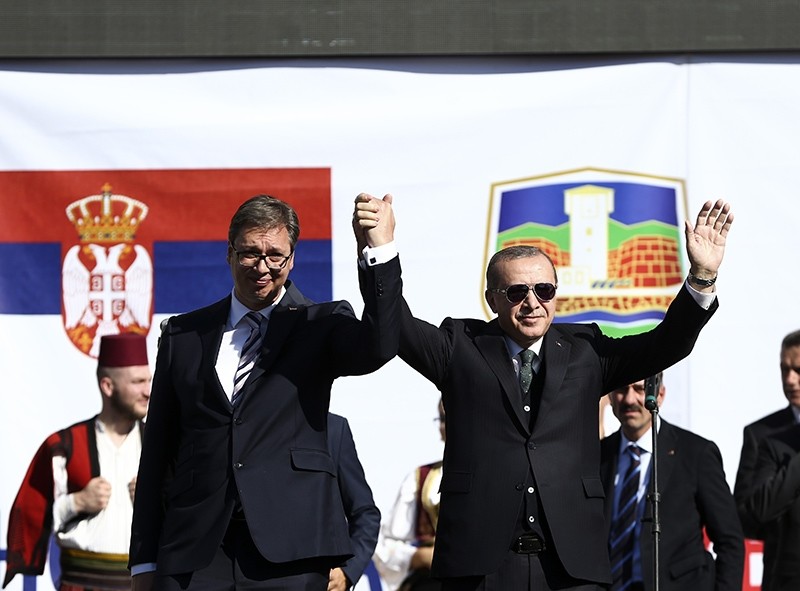 President Recep Tayyip Erdoğan has received a rousing welcome as he visited a predominantly-Muslim region in southwestern Serbia.

Erdoğan is on a two-day visit to Serbia, pledging to boost economic and other ties as part of stepped up efforts by Ankara to increase its clout in the Balkans.

"Our day-long work with my dear Vucic was crowned by our meetings in Novi Pazar. With our infrastructure and superstructure works, I believe we are launching a new era [in relations] between Turkey and Serbia," Erdoğan said, thanking his Serbian counterpart for an exceptionally warm welcome.

Erdoğan added that in two days 16 bilateral agreements were signed between the two countries, saying that Turkey, like other countries, wants to see a united and prosperous Serbia living in peace.

"We are ready to cooperate with Serbia in every area. Turkey, like in all other regional development projects, will support any development initiative in Serbia. We encourage our businessmen to invest [in Serbia]. Yesterday, we signed an agreement to import 5,000 tons of meat from Serbia. We are working to realize highway and airway projects. We believe in this. The road is civilization. These roads will be done despite tough topography," Erdoğan said, pointing to the development of economic collaboration.

Erdoğan also acknowledged Vucic's support in the fight against the Gülenist Terror Group (FETÖ) and his support on the night of July 15, 2016, when small junta loyal to FETÖ, led by the U.S. based Fetullah Gülen, tried to overthrow the democratically elected government in a coup attempt. "Just like we did in Turkey, we will extirpate FETÖ from the Balkans. I have full confidence in Vucic on this issue. He was one of the leaders that initially declared his support for us on the night of the coup," Erdoğan said.

On July 15, 2016, a military junta linked to FETÖ attempted to topple the government and impose martial law. It was thwarted by troops loyal to the government along with police and millions of citizens marching in favor of democracy.

Erdoğan concluded his speech by calling for unity in the Balkans, which has seen a number of bloody regional conflicts in the past.

"The Balkan people are paying the price of conflict and chaos caused by the incitement of foreign powers. The day comes and they go away, while people continue to live side by side here. If you, the Balkan people, unite, if you are together – you will be so strong and prosperous," Erdoğan said.