No suspects hiding in US diplomatic missions in Turkey, Ambassador Bass says 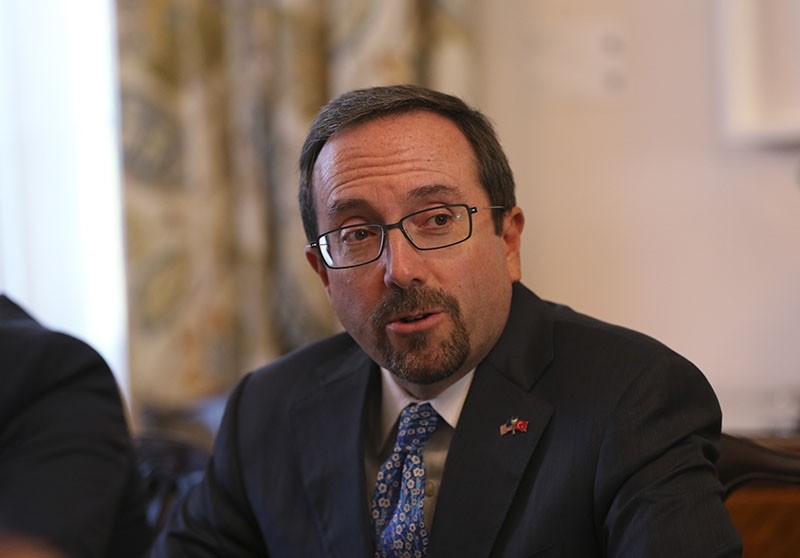 No suspects in Turkish anti-terror probes are hiding in the U.S. diplomatic missions in Turkey, the outgoing U.S. Ambassador to Turkey, John Bass, said Wednesday in his farewell meeting with the press in Turkey, noting that he will leave Turkey this weekend.

His comments came after several Turkish media outlets claimed that a second U.S. consular staff sought with an arrest warrant in a probe targeting the Gülenist Terror Group (FETÖ) is hiding at the U.S. consulate in Istanbul.

Bass dismissed the allegations and stated that they are not allowing any of their staff hiding from judicial processes.

Regarding the arrested consular staff Metin Topuz, who is being accused of cooperating with the FETÖ, Bass said that the U.S. government still have not received an answer as to why Topuz has been arrested, but communication will resume between the two authorities.

Ambassador Bass reiterated that Topuz was working in coordinating organized crime and drug enforcement units and said that many drug traffickers were apprehended through this coordination.

However, if Topuz crossed over his job definition and made other contacts, we would be happy to see the evidence of this, Bass added.

Bass stated that the suspension of U.S. visa services in Turkey upon the arrest, which was interpreted as an extreme measure by Turkish officials and responded in kind, "is not a measure we are enjoying."

"But I would also note that it is quite unusual for a government to detain and arrest employees of a diplomatic mission without holding any official discussion," he added.

Just like the State Department briefing on late Tuesday, Bass said that the decision was taken by the U.S. government, noting that the current row could be solved through dialogue between the two governments.

The press conference came a day after President Recep Tayyip Erdoğan slammed Bass for his stance in a number of issues in bliateral ties, adding that: "Bass is not considered the representative of the U.S. anymore."

Despite the worst period in U.S. – Turkey ties over a decade, Bass also pointed out the beneficial parts of U.S. – Turkey cooperation. "There hasn't been terror attacks in Turkey for the last 9.5 months. This is not because Daesh had given up, but because of our cooperation," Bass said.

The U.S. support to the PKK terrorist group's Syrian wing the Democratic Union Party (PYD) and its armed wing the People's Protection Units (YPG) in the pretext of fighting Daesh terrorists in Syria constitutes the most problematic issue in U.S. – Turkey relations, as PKK attacks in Turkey's eastern and southeastern regions continues to target security forces and civilians on a daily basis, along with a bitter death toll.

Bass stated that the U.S. does not support an independent Kurdish state, a so-called Kurdish corridor in northern Syria or the dissolution of Turkey's territorial integrity.

The presence of FETÖ leader Fetullah Gülen in U.S. state of Pennsylvania, who is being sought for a number charges in Turkey including the July 15 coup attempt, remains another contentious issue. Bass once again said that Gülen's extradition is a matter of judiciary and his request is not being treated different than others.