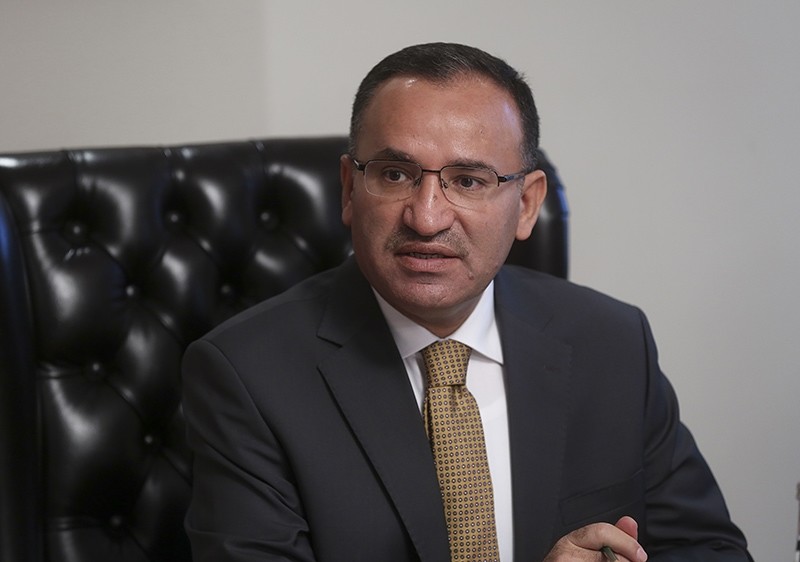 Detained U.S. consulate employee Metin Topuz has not demanded access to a lawyer or to see his family, Deputy Prime Minister Bekir Bozdağ said Thursday in an interview with broadcaster Habertürk.

The U.S. mission can apply to send a lawyer to Topuz, Bozdağ said, adding: "The testimony of a U.S. local staff member, a Turkish citizen, was filed to both the police and the prosecution office in the presence of a lawyer."

Bozdağ's remarks were made after U.S. Ambassador John Bass said in a video message released late Monday that Topuz had insufficient access to a lawyer.

Turkish national Metin Topuz, confirmed by the U.S. Consulate in Istanbul as a local employee, was remanded to custody over terrorism charges by an Istanbul court last week. Topuz is suspected of having links to the Gülenist Terror Group (FETÖ), which is behind last year's defeated coup attempt, according to a judicial source. Ankara says FETÖ and its U.S.-based leader, Fetullah Gülen, orchestrated the attempted coup, which killed 250 people and injured nearly 2,200.

"His testimony at the criminal peace court was also filed in the presence of a lawyer. It's impossible for these to be done without a lawyer," Bozdağ said.

Meanwhile, Justice Minister Abdülhamit Gül said Topuz will meet with his lawyer Friday, stressing that only Istanbul Chief Public Prosecutor had the authority to issue statements regarding the case.

"Everyone should respect the legal process. Every right of defense is sacred as provided by law," Gül said, adding that Turkey was a legal state.

He also said that it was clear that Ambassador Bass tried to distort the situation.

The U.S. Embassy in Ankara first announced Sunday that it had suspended non-immigrant visa services at all diplomatic facilities in Turkey.

Responding to Daily Sabah's request for a comment on Bozdağ's response concerning Topuz, the U.S. Embassy in Ankara said: "We have nothing to add to Ambassador Bass' remarks at the round table with the Diplomatic Correspondents Association yesterday."

"The suspect had phone contact with 121 people investigated for links to FETÖ and contacted people using ByLock hundreds of times," one section of the indictment, reported by Anadolu Agency (AA), claims, referring to the encrypted messaging app used by the terrorist group. "The suspect acted as a liaison between members of FETÖ and its leader, Fetullah Gülen, who lives in Pennsylvania," the indictment says, claiming there is strong evidence requiring his arrest.

Bozdağ also said that Turkish and U.S. officials have decided to meet to work on resolving the diplomatic dispute between the two NATO allies and the talks held on Wednesday between the foreign minister and U.S. secretary of state were "constructive."

Ankara has largely blamed the crisis on outgoing U.S. Ambassador Bass, who will be leaving the country over the weekend and be replaced. Bass's departure has been viewed as a possible way toward the normalization of U.S.-Turkish ties, as Bass has also irked Ankara several times since his appointment by former U.S. President Barack Obama.

President Recep Tayyip Erdoğan slammed Bass on Tuesday for what he said was his role in the suspension of non-immigrant visa services at U.S. missions in Turkey, asserting that he does not consider him a representative of the U.S.

In addition, there have also been claims that several officials at the U.S. State Department have pushed for straining ties with Ankara, as there have been disagreements over several strategic issues, including FETÖ and U.S. support for the PKK Syrian affiliate Democratic Union Party (PYD) and its armed People's Protection Units (YPG).

On Monday, Turkish authorities issued an arrest warrant for another staffer working for the U.S. Consulate in Istanbul whose wife and two children were detained by police. The Istanbul Chief Public Prosecutor's Office said that the suspect, identified by his initials N.M.C. and who does not hold diplomatic immunity, was called on for testimony. His family was detained in the central province of Amasya, it added. Reports in the Turkish media claimed, which Bass rejected, claim that the other suspect was at the U.S. Consulate in Istanbul.

Bozdağ said Turkey should take the U.S. Embassy's word that the local staffer was not hiding in the U.S. Consulate in Istanbul.