Turkey, US in dialogue to salvage ties from mess Ambassador Bass left behind 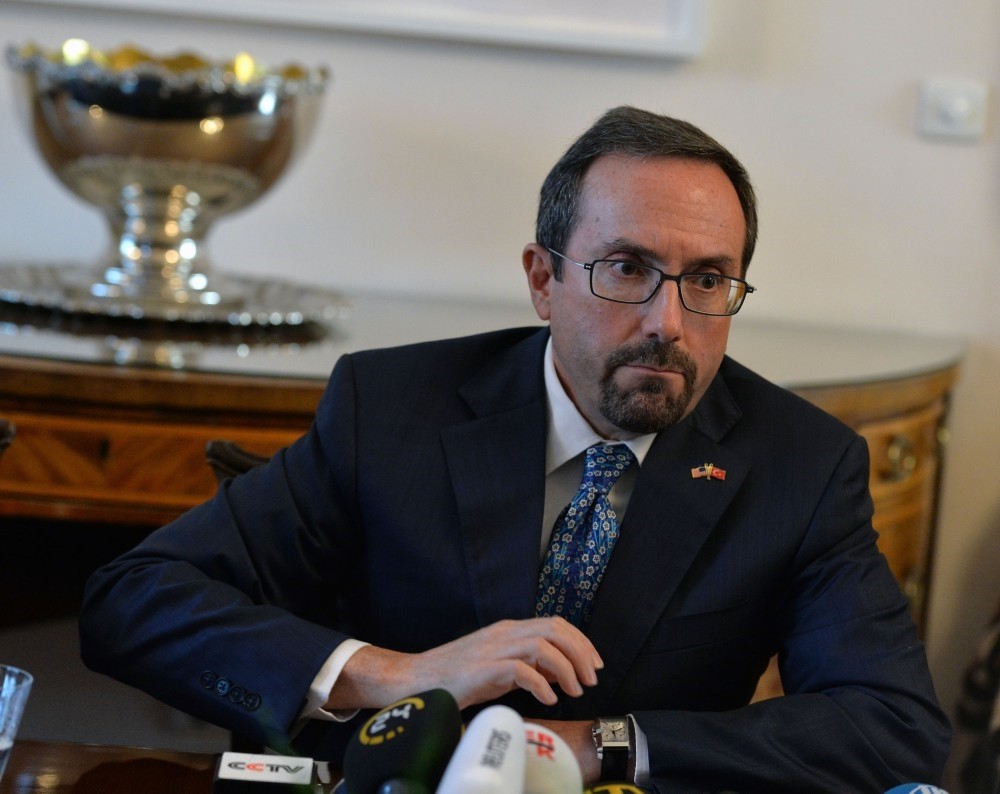 U.S. Ambassador John Bass attends a news conference in Ankara Wednesday after President Erdou011fan slammed him for his stance in a number of issues in bliateral ties.
by Ali Ünal Oct 12, 2017 12:00 am

The departure of U.S. Ambassador Bass has been viewed as a new development that may help thaw Ankara-Washington ties, which suffered a new blow after the U.S. Embassy in Ankara imposed a visa ban on Turkish citizens

The U.S.'s decision to suspend visa services at its missions in Turkey is likely to be reversed in the coming days after the departure of outgoing U.S. Ambassador John Bass. Prime Minister Binali Yıldırım hinted yesterday that strained ties between Turkey and the U.S. would normalize soon. "We hope that relations between the two allies will return to normal soon," he said in an address to provincial governors in Ankara on Wednesday. In line with Yıldırım's remarks, Bass also expressed his hope of finding a way out of the problem soon. "We are committed to continue our conversation, which is already underway, between the two governments. Our hope that we will be able to resolve this matter quickly," Bass, who is expected to leave Ankara this weekend, told journalists yesterday in the capital.

Diplomatic sources who are familiar with the issue acknowledged that there is an ongoing diplomatic effort to resolve the visa problem, indicating that restoring relations between the two countries would take place after Bass's departure. Foreign Minister Mevlüt Çavuşoğlu spoke with U.S. Secretary of State Rex Tillerson yesterday as part of efforts to normalize ties. Turkish officials have condemned the long-time U.S. diplomat for what they say is his role in the crisis. Bass's departure has been viewed as a possible way toward normalization of U.S.-Turkish ties, as Bass has irked Ankara several times since his appointment by former U.S. President Barack Obama.

There has also been claims that several officials at the U.S. State Department have pushed for straining ties with the Turkish government, as there have been disagreements with Ankara over several strategic issues, including FETÖ and the U.S. support to the PKK's Syrian affiliate Democratic People Union (PYD) and its armed People's Protection Units (YPG).

President Recep Tayyip Erdoğan slammed Bass on Tuesday for what he said was his role in the suspension of non-immigrant visa services at U.S. missions in Turkey, asserting that he is not considered a representative of the U.S.

In response, Bass said that decision to suspend non-immigrant visa services was not a unilateral decision and that the decision was made in coordination with the U.S. State Department.

Two days after unprecedented visa ban on Turkish citizens by the U.S. Embassy, Ambassador John Bass released a video defending the ban. The ambassador proclaimed the innocence of Metin Topuz, a U.S. Consulate Istanbul employee whose arrest for links to the Gülenist Terror Group (FETÖ) triggered the ban. He dismissed the serious terrorism charges against the man and took a pre-emptive defense against the possible arrests of U.S. mission staff in the future, saying they expect other Turkish staffers at U.S. missions to be arrested.

The consulate employee is not the first suspect facing terrorism charges, nor will he be the last employee of a U.S. mission questioned for links to terrorist groups. On Monday, Turkish prosecutors announced that they had summoned another consulate employee identified as N.M.C. for his family's suspected links to FETÖ. His wife and son were also detained for alleged close ties to the group, and according to unconfirmed reports, were also in touch with Topuz. Earlier this year, an interpreter working for the U.S. Consulate in Adana was arrested for suspected links to the PKK, another terrorist group.

"This conversation largely remains out of the public eyes and we continue to engage Turkish government to address situation," Bass said in his last press meeting. After the press conference, Bass went to the Foreign Ministry and met with Deputy Undersecretary Ahmet Muhtar Gün to discuss the matter.

Regarding Topuz, who is accused of cooperating with the FETÖ, Bass said that the U.S. government still has not received an answer as to why Topuz was arrested. Dismissing evidence of Topuz's contact with hundreds of FETÖ suspects, the outgoing ambassador said they were unaware of the existence of the evidence and that communication will resume between the two authorities. "There are very serious allegations that we want to take seriously. We want a better understanding, what the essential evidence is that supports these allegations." Bass said.

Topuz, who told investigators he works for the Drug Enforcement Administration (DEA), was arrested last week after prosecutors discovered his alleged close contact with dozens of former police chiefs and officers jailed for links to FETÖ. Bass reiterated that Topuz was working in coordinating organized crime and drug enforcement units and said that many drug traffickers were apprehended through this coordination.

However, if Topuz exceeded his job definition and made other contacts, "we would be happy to see the evidence of this," Bass added. He explained that the suspension of U.S. visa services in Turkey after the arrest, which was interpreted as an extreme measure by Turkish officials, "is not a measure we are enjoying."

"But I would also note that it is quite unusual for a government to detain and arrest employees of a diplomatic mission without holding any official discussion," he added.

Responding to a question about whether there are suspects in Turkish counterterrorism probes who are hiding in U.S. diplomatic missions in Turkey, Bass said that there is "no one hiding" at any U.S. diplomatic facilities in Turkey. "No one is hiding in any of our facilities. To the best of our knowledge there has also been no outstanding request for our local staff to come and talk to [prosecutors] or to appear for detention," Bass said.

Bass said close security cooperation ensured that Daesh was no longer able to carry the kind of attacks that plagued Turkey in 2015 and 2016. "We certainly bring the attention of the Turkish government and want to work cooperatively with them to address that particular challenge they faced. We would hope that the Turkish government would approach it in the same way with respect," he said.