Detained US consulate employee was allowed to meet lawyers 3 times since Sept. 30: prosecutors 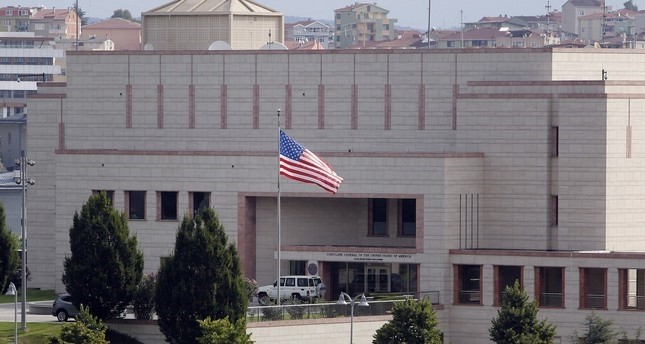 The Istanbul Chief Public Prosecutor's Office announced that Metin Topuz, a detained communications employee for the U.S.' Istanbul Consulate-General, was given the chance to meet with his lawyers three times since Sept. 30, contrary to U.S. claims which say he was not allowed see his lawyers.

The statement echoed comments made by Deputy Prime Minister Bekir Bozdağ Thursday. Bozdağ had stated that Topuz had not demanded access to a lawyer or to see his family.

He also hit back at U.S. claims that Topuz was denied access to an attorney, saying: "His testimony at the criminal peace court was also filed in the presence of a lawyer. It's impossible for this to be done without a lawyer."

Turkish national Topuz, employed by the U.S. Consulate in Istanbul as a local worker, was remanded in custody over terrorism charges by an Istanbul court last week. Topuz is accused of having links to the Gülenist Terror Group (FETÖ), which is behind last year's defeated coup attempt, according to a judicial source.

"The suspect had phone contact with 121 people investigated for links to FETÖ and contacted people using ByLock hundreds of times," claims one section of the indictment against Topuz, reported by Anadolu Agency (AA), referring to an encrypted messaging app used by the terrorist group.

A spokesperson for the U.S. State Department said late on Thursday that Washington is expecting a thaw in recent tensions with Turkey.

Heather Nauert also said that Wednesday's phone call between Foreign Minister Mevlüt Çavuşoğlu and his U.S. counterpart Rex Tillerson included the arrest of American pastor Andrew Brunson, who is under arrest in İzmir on charges linked to FETÖ.

Topuz has been linked to a number of FETÖ suspects, including police commissioners and former prosecutor Zekeriya Öz, a fugitive accused of attempting to overthrow the government through the use of force, added the sources, who asked not to be named due to restrictions on speaking to the media.

Following Topuz's arrest the U.S. Embassy in Ankara announced Sunday that it had suspended non-immigrant visa services at all diplomatic facilities in Turkey.