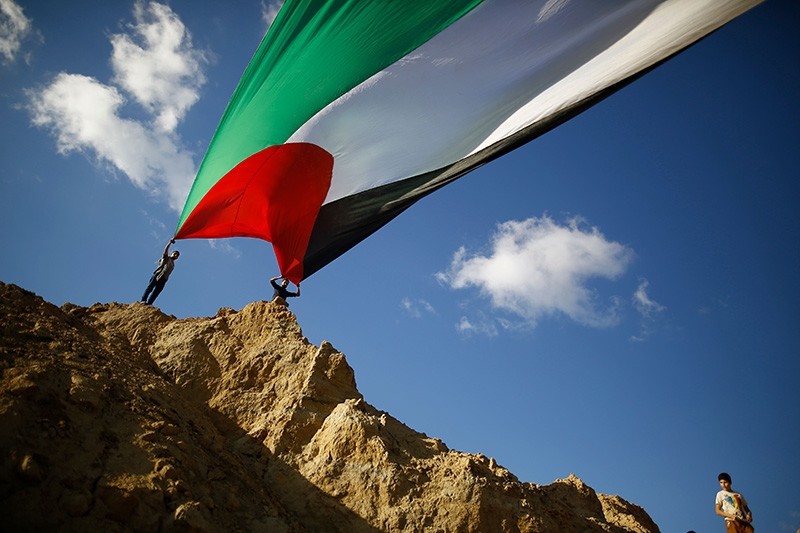 Palestinians hold their country's national flag as they attend a rally against the demolition of the Tel Es-Sakan hill, south of Gaza City, on October 13, 2017. (AFP Photo)
by Anadolu Agency Oct 14, 2017 12:00 am

"This reconciliation agreement concludes the conflict among our Palestinian brothers," Kalın said in a statement.

Under the terms of the deal, the Ramallah-based Palestinian unity government will assume political and administrative responsibility for the Gaza Strip no later than Dec. 1.

Kalın added that President Recep Tayyip Erdoğan had always supported the talks, and had held meetings with the Hamas and Fatah leaders.

The last meeting with Palestinian President Mahmoud Abbas was held this August in Turkish capital Ankara.

Kalın urged international organizations, especially the UN, to end this humanitarian crisis, revive the peace process and take steps towards the two-state solution.

"Israel should end its siege on Palestinian lands and avoid any movement that would harm the reconciliation process," he said.

The West Bank and the blockaded Gaza Strip have remained politically divided since 2007, when Hamas wrested control of the strip from Fatah following several days of bloody street fighting.

Hamas's capture of Gaza in 2007 ended an earlier -- if short-lived -- unity government established after Hamas swept the 2006 Palestinian legislative polls.