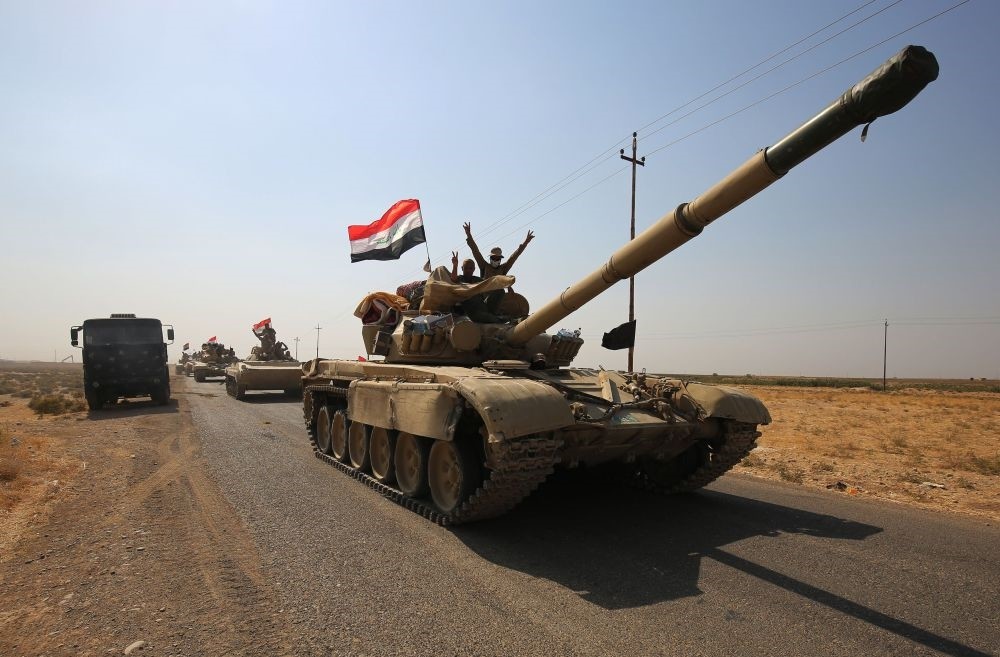 Iraqi forces drive toward KRG peshmerga positions on Oct. 15, on the southern outskirts of Kirkuk.
by Yunus Paksoy Oct 17, 2017 12:00 am

In an offensive against the Kurdish Regional Government for control of the disputed province of Kirkuk, Iraqi forces took over strategic points in Kirkuk province from the KRG yesterday, including industrial zones, gas facilities and oil refineries, as well as an airport, while Ankara has backed Baghdad's move offering collaboration against PKK activities in the country

The Iraqi miltiary took over strategic spots in Kirkuk yesterday as part of an operation as the Turkish government expressed backing for the offensive. Having started an assault on the oil-rich Iraqi city of Kirkuk late Sunday, the Iraqi military announced that troops seized territory, bridges, industrial zones, gas facilities and refineries as well as an airport from the Kurdistan Regional Government (KRG). "We have only acted to fulfill our constitutional duty to extend federal authority and impose security and protect the national wealth in this city," Iraqi Prime Minister Haider al-Abadi said in a written statement.

In light of the developments unfolding in the area, Foreign Ministry sources told Daily Sabah yesterday that Ankara "is closely monitoring" the situation in Kirkuk. Later in the day, the ministry issued a written statement, saying: "Turkey will take the side of the Iraqi government to take steps to ensure lasting peace and stability in the country." As the Iraqi military, together with Hashd al-Shaabi militias, moved in on Kirkuk, the unity of Iraqi Kurdish forces fell following the withdrawal of some peshmerga fighters from the city along with heavy equipment and armored vehicles. Halgurd Hikmat, spokesman for the KRG Peshmerga Ministry, stressed that "there was no order by the Peshmerga Ministry for any unit or force to withdraw." Hikmat vowed reprisal, stressing that those fleeing the city will be brought to account.

The withdrawal of peshmerga forces from Kirkuk, leaving the city vulnerable to Iraqi forces, led to dramatic scenes as armed and unarmed civilians blocked roads to prevent them from escaping. While fleeing peshmerga fighters were arrested, some civilians spoke of treason and called them traitors.

Furthermore, thousands of Iraqi Kurds were seen leaving the city en masse, which could happen in other KRG cities such as Sulaymaniyah and Irbil. Pointing to longstanding strife between KRG President Masoud Barzani's Kurdistan Democratic Party (KDP) and the Patriotic Union of Kurdistan (PUK), Can Acun, a Middle East expert for the Ankara-based Foundation for Social, Economic and Political Research (SETA) think tank, said the PUK had recently held talks with Baghdad, striking a secret deal.

"Some figures from the Talabani family held talks with the central government. It is contended that Iran has a role in it as well. It seems like the PUK reached a deal with Baghdad," Acun said. He called Barzani's attempt to impose the independence referendum on the PUK "a gamble he played and lost."

On the other hand, seizing the opportunity amid the intra-peshmerga conflict and the Iraqi assault, the PKK imposed influence in Kirkuk, as its armored vehicles on the streets and heavily armed terrorists called for resistance, likening the city to Kobani. Moreover, clashes were reported between the PKK and the Iraqi military in rural Kirkuk.

The Foreign Ministry statement asserted that the Turkish government is open to "any kind of collaboration with the Iraqi central government" to put an end to PKK activity in Iraq. "We will hold those responsible who help the PKK terrorist organization find shelter in the region," it added.

The rift between Baghdad and Irbil peaked on Sept. 25 when the latter held an independence referendum, including a separate vote on the future of the contested Kirkuk region. Three weeks after the vote, parts of Kirkuk have been taken away from the KRG and Baghdad has exerted control over the oil-rich city.

Bilgay Duman, an Iraq expert at the Center for Middle Eastern Strategic Studies (ORSAM), said the Iraqi central government exercised its constitutional right to sovereignty and the KRG received a staggering blow. "Baghdad exerted its sovereignty by seizing these areas whereas Iraqi Kurds lost very significant centers," he said.

The KRG controls six fields in the Kirkuk region providing some 340,000 of the 550,000 barrels of oil per day exported by the regional administration. Duman underscored that possessing the oil refineries would play a key role in the run-up to the independence of Iraqi Kurds. "Kirkuk was important for the KRG not for its strategic location, but for its role in establishing an independent state," he said. "It will deepen the ongoing crisis."