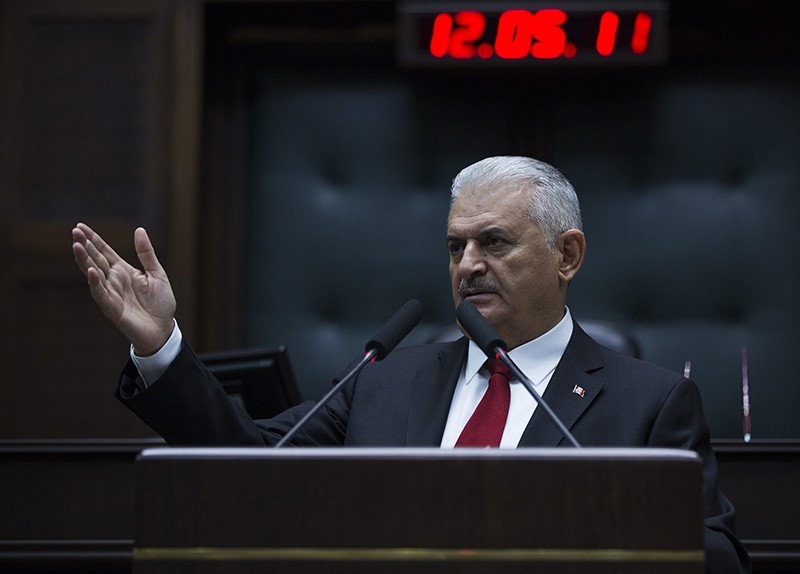 The Iraqi city of Kirkuk should be run in accordance with its "historic background," Prime Minister Binali Yıldırım said Tuesday.

Speaking at the Justice and Development Party's (AK Party) parliamentary group meeting, Yıldırım said that the demographic composition of the oil-rich area, which includes Turkmens, Arabs and Kurds, has changed since the 2003 U.S.-led invasion of Iraq. "It is a positive development that Kirkuk has been taken under control by the Iraqi central government," Yıldırım said.

"The points to consider here are that an administrative system that should re-establish a demographic status based on the historical depths of the region should be put in place."

Backing Baghdad's decision, Yıldırım asserted that Kirkuk was formerly a Turkmen area but "this composition has changed over time."

Stressing that Turkey, Iran and Iraq announced sanctions against the Kurdistan Regional Government (KRG), Yıldırım said halting flights to and from Irbil and Sulaymaniyah and shutting its airspace have been included in the sanctions so far, adding that further steps will be taken.

"We do not have a problem with the people there. Those who made [the referendum] decision will pay the price. It is that simple. They finally started paying. …We continue to maintain close cooperation with the Iraqi central government," he said.

Meanwhile, Nationalist Movement Party (MHP) Chairman Devlet Bahçeli commented on the recent developments in Iraq in a speech at the MHP parliamentary group meeting in which he referenced the increased tensions in the region following the KRG's independence referendum on Sept. 25.

The Iraq central government alleged that KRG peshmerga forces were bringing PKK fighters to Kirkuk and called the move a declaration of war. Baghdad launched an operation on Kirkuk on Sunday to retake the military base and the oil wells there. Bahçeli said that even though KRG President Masoud Barzani denied the allegations, he claimed all information and findings show that they brought in PKK fighters.

"The nesting of the PKK in Kirkuk after Qandil and Sinjar is not only an issue of national security for Iraq and the region, but also for Turkey," Bahçeli said, adding that the presence of PKK fighters in Kirkuk is alarming for Ankara.

Welcoming the statements made by the National Security Council (MGK) regarding the issue, Bahçeli stressed that all measures and steps should be planned with the Iraqi central government regarding the launching of a joint operation to prevent possible "incidents."

Bahçeli asserted that Kirkuk will never be left to the PKK or KRG peshmerga forces at any cost and that "even though Iraqi forces took control of the Kirkuk governorate and hung a flag [there], currently the Turkmen city is vulnerable to all threats."

"The PKK fighters running away from Kirkuk should be chased and eradicated from the region," Bahçeli said.

"Turkey should take a firm stance in order to fully use its legitimate, historical rights and authorities ensuing from the international agreements," he said, underlining the necessary future steps to be taken by Ankara. "The decision to close Turkish airspace to Barzani should deepen."

He contended that if necessary, a military operation should be initiated in order to prevent what he called the PKK's efforts to control Turkmen regions, asserting that there will not be a peaceful environment for Turkey or other countries in the region unless Daesh, the PKK, its Syrian affiliate Democratic Union Party (PYD), its People's Protection Units (YPG) militia and the Gülenist Terror Group (FETÖ) are eradicated.