Turkey and Iran to maintain cooperation in security, economy 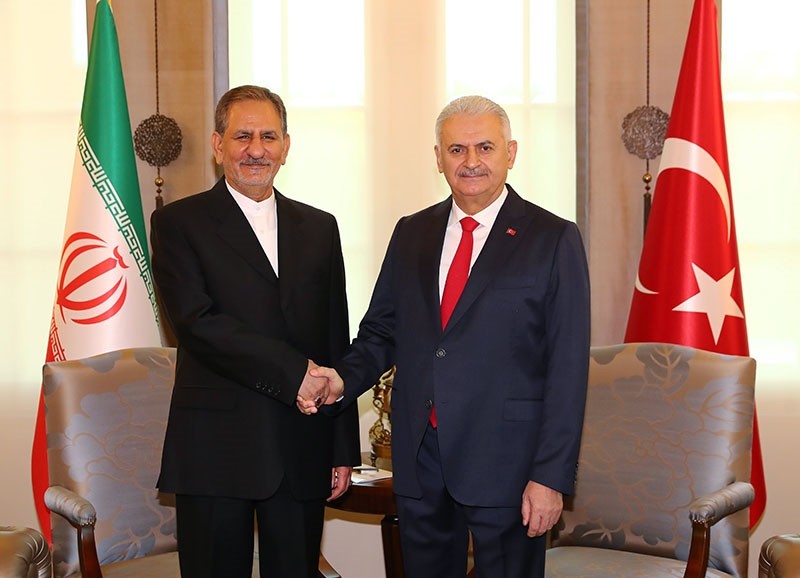 Yıldırım and Jahangiri discussed the latest developments in Syria and Iraq, and other regional and international issues during the closed-door meeting at the Prime Ministry Office in Çankaya, a prime ministry source said.

Following the meeting between the two leaders, Turkish and Iranian delegations discussed latest economy and security issues in bilateral relations in a meeting that lasted 1.5 hours.

In a joint news conference after the meeting, Jahangiri reiterated that Turkey and Iran have agreed to use their local currencies in bilateral trade, and Yıldırım noted that the central banks of both countries have reached an agreement and other banks will be notified of the agreement in the upcoming days.

Jahangiri said that increasing Iranian oil and gas imports to Turkey will be discussed in detail in upcoming negotiations.

Yıldırım said that Turkey appreciates increasing cooperation with Iran against PKK terrorist group and both countries share the same sensitivities regarding the developments in northern Iraq.

Jahangiri is scheduled to attend the Developing-8 Countries (D-8) meeting in Istanbul Friday.

The ninth summit marks the 20th anniversary of the economic group consisting of eight emerging economies from the Muslim world.

The organization was established on June 15, 1997, by Turkey, Indonesia, Bangladesh, Egypt, Iran, Malaysia, Nigeria and Pakistan.

Today, the organization has a combined GDP of $3.7 trillion and includes more than 1 billion people -- around 15 percent of the world's population.

Two of its members -- Turkey and Indonesia -- are among the group of the world's 20 biggest economies.