Erdoğan says Europe died in Bosnia, was buried in Syria 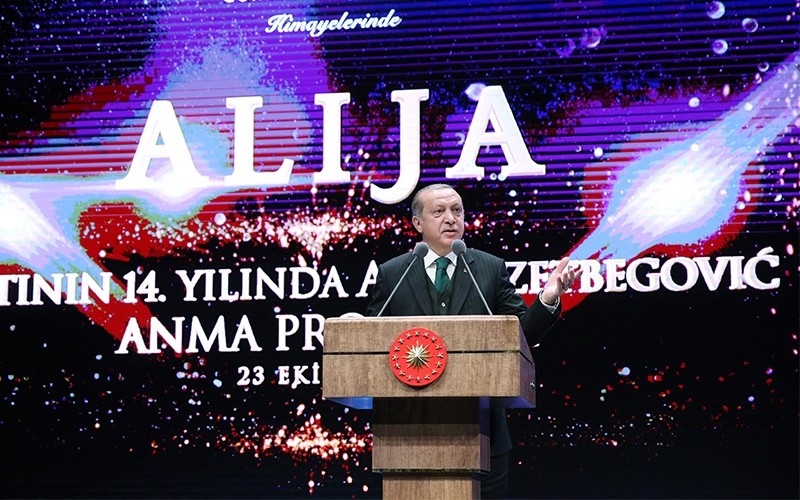 President Erdou011fan speaking at the Beu015ftepe Presidential Complex in Ankara commemorating the death of the late Bosnian leader Alija IzetBegovic, Oct. 23, 2017 (IHA Photo)
by Daily Sabah with Agencies Oct 23, 2017 12:00 am

The idea of a European civilization has come to an end, President Recep Tayyip Erdoğan said Monday, criticizing the European countries' indifference toward the humanitarian tragedies in Syria and Myanmar.

"Europe died in Bosnia and it was buried in Syria. The bodies of innocent children washing up ashore are the tombstones of the Western civilization. Unfortunately, in the last seven years, the old European values have been discredited and destroyed by the very owners of these values," he said during a program at the Presidential Complex in Ankara commemorating the 14th anniversary of Bosnian leader Alija Izetbegovic's death.

The devastating picture of Syrian toddler Aylan Kurdi's body washed ashore on a beach in the Turkish resort town of Bodrum, shocked the world in September 2015, moving many international groups to call for action against the atrocities in Syria and better immigration policies from the EU states.

"Those who did not see the atrocity in Bosnia are also deaf and blind to the atrocity in Rakhine," the president said, adding that even though the times and actors have changed, people's pain and suffering has continued as "imperialist bloodsuckers continue to exploit."

"What is the difference between what happened 25 years ago in Bosnia and what we are witnessing today in Syria?"

At least 100,000 were killed in Bosnia-Herzegovina during the Bosnian War between 1992 and 1995, more than 80 percent of whom were Muslim Bosniaks from and around the town of Srebrenica, by Serbian troops under the command of General Ratko Mladić, after the Bosnian Serb army attacked the U.N. safe area of Srebrenica. The International Court of Justice recognized the massacre in Srebrenica as genocide in 2007.

The Srebrenica massacre, during which mass rapes and killings took place, is the only genocide recognized by an international court. The bodies of many killed in the mass murders are still missing, as Serb forces buried them in mass graves.

In Myanmar, the 1.1 million Rohingya, described by the U.N. as the world's most persecuted people, have faced heightened fears of attack since dozens were killed in communal violence in 2012. The Rohingya are denied citizenship and classified as illegal immigrants from Bangladesh, despite having roots in the region that date back over a century, while being marginalized and occasionally subjected to violence in Myanmar. The U.N. documented mass gang rapes, killings – including of infants and young children – brutal beatings and disappearances committed by security personnel. An estimated 436,000 Rohingya have arrived in Bangladesh in the last month alone, fleeing violence from Myanmar authorities that the U.N. has called a "textbook example of ethnic cleansing." According to Bangladeshi Foreign Minister Abul Hasan Mahmood Ali, around 3,000 Rohingya have been killed in the bloodshed. In total, more than 800,000 Rohingya refugees are now believed to be in Bangladesh.

"What is the difference between what was experienced 25 years ago in Bosnia and what we are witnessing in Syria today?" Erdoğan asked. "They remained silent when people were exiled and fled Aleppo to Idlib. The ones who remained indifferent those days to the killings of women and children have the same attitude today regarding terrorism by the Buddhists in Myanmar."

"Without Turkey, the EU will suffer isolation, desperation and inner conflicts"

Erdoğan also warned Europe against placing sanctions on Turkey, arguing that the EU needs the country as a member.

"Those who believe that they can force us to our knees with sanctions will very soon realize that they are making a serious error," Erdoğan said.

"Turkey is not dependent on Europe, in fact it is Europe that is dependent," he added, saying that accession was a solution to the bloc's chronic problems. Without Turkey, the EU will suffer isolation, desperation and inner conflicts."

European leaders are considering options to cut or redirect funds earmarked for Turkey as part of Ankara's bid to become an EU member state.

Erdoğan has said he would not be the one to end Turkey's bid to join the bloc, but also called on Europe to take a final decision quickly as to whether if wants the country as a member.

Erdoğan also said there is an ongoing increase of xenophobia in Europe, particularly against Muslims and Turks, which he said will not benefit Europeans in any way.

The U.S. has been supporting the Syrian Democratic Forces (SDF), which is dominated by the PKK-affiliated group in Syria, despite the PKK being recognized as a terrorist group by the U.S., EU and Turkey, on the pretext of fighting Daesh. Ankara argues that there is no difference between one terrorist group over another, criticizing Washington for picking and choosing between terrorist groups.

Accusing the West of hypocrisy and double standards on democracy and human rights, Erdoğan also said the suffering in Syria, Palestine and Libya today is caused as a result of seeing human rights, democracy and freedoms as a luxury for them, as it was before for Bosnians.