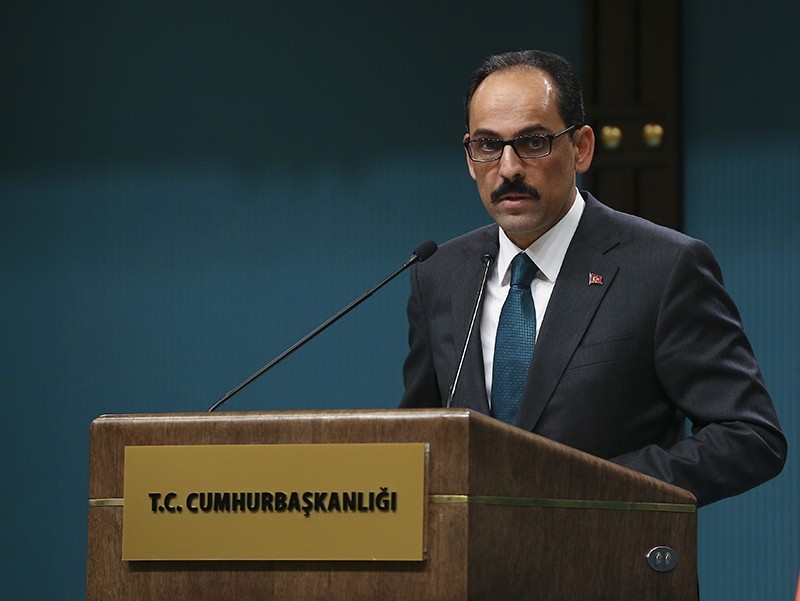 Speaking at a news conference at the Presidential Palace complex in Ankara.Kalın said that it was impossible for Turkey to accept the invitation of terrorist PYD and its armed wing People's Protection Forces (YPG).

"We do not see any problems in inviting Kurds who are not from PYD/YPG, but PYD/YPG is a terrorist organization. We will not accept inclusion of a terrorist group into a platform like Astana [talks on Syria]," the presidential spokesperson said.

According to Kalın, the problem was "mostly" solved, but Turkey will not welcome such initiatives in the future.

When asked about controversial independence referendum held by the Kurdistan Regional Government (KRG), Kalın said that everyone, including Turkey, expected the KRG to completely cancel the results of the illegal Sept. 25 vote.

"We want to point out the expectation of reinstating the status quo regarding the status of the Irbil administration. In this regard, we continue our efforts coordinated both with the Iraqi central government and international actors," Kalın said.

He added that KRG Prime Minister Nechirvan Barzani's request to meet with President Recep Tayyip Erdoğan could be reassessed after Irbil takes more steps toward preserving Iraq's territorial integrity and normalizing relations with the central government in Baghdad.

Iraqi government forces and Iranian-backed Hashd al-Shaabi militias launched a surprise offensive on Oct. 16 to retaliate against the independence referendum in Iraqi Kurdistan.

A mainly bloodless advance by Iraqi forces saw them reclaim the entire oil-rich province of Kirkuk, stripping the KRG of a major chunk of its oil revenues and dealing a crippling blow to hopes for independence.

Kirkuk fell to Iraqi forces without much resistance on Oct. 16, but the peshmerga began to fight back forcefully as they withdrew closer to the core KRG territory. The most violent clashes happened in the northwestern corner where peshmerga are defending land crossings to Turkey and Syria and an oil hub that controls KRG crude exports.