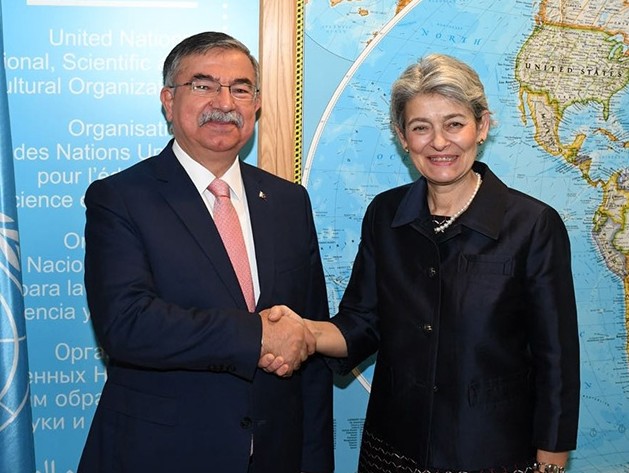 Speaking at the 39th session of the general conference of UNESCO in Paris, Yılmaz said Turkey "strongly believes in the mission of this organization to build peace in the minds of men and women."

"To further support UNESCO's efforts, we have decided to put our candidacy to its executive board for the period of 2017-2021.

"Although we had not been a member of the executive board since 2005, we remained a very active member through our work in the relevant intergovernmental programs and important committees of UNESCO.

"We have also financially supported the organization during a critical period and seconded experts."

The minister said Turkey has been realizing "a set of domestic reforms… in order to cope better with modern challenges in the field of education."

Turkey's educational challenges include the almost 100,000 displaced Syrian and Iraqi school-age children living in Turkey, over 60 percent of whom have been enrolled into the school system.

"We have done our fair share and we will continue to fulfil this humanitarian responsibility," Yılmaz said.

"Turkey is ready to take the responsibility as an executive board member. For the challenges ahead, we are committed and willing to work with all of you under the guidance of our new director general."

Turkey is competing within a four-state group, containing Finland, Germany, Portugal and Turkey, for three seats.

The election of members of the executive board is scheduled for Nov. 8.

UNESCO recently took a hit, when the United States in October announced its intention to withdraw from the body by the end of the year, with Israel immediately following suit. The U.S. contributes $80 million, one-fifth of UNESCO's budget, each year.