Greek minister: Refugee deal with Turkey quite significant for Greece 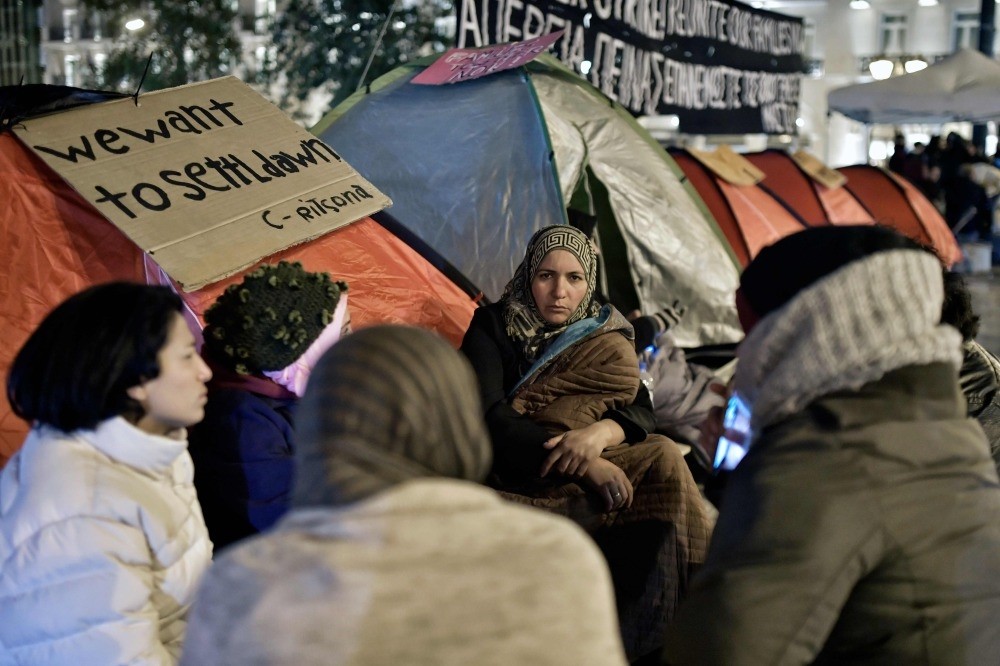 Refugees gather and sit by their tents at Athen's central Syntagma Square opposite Greek parliament, as refugee families protest against delays in reuniting with their relatives in other European countries, Nov. 1.
by Daily Sabah with Agencies Nov 03, 2017 12:00 am

The migrant deal between Turkey and the EU is crucially important, as refugee crossings have nearly come to an end, Greece's immigration minister has said

European countries continue to heap praise on Turkey and its efforts to hold up the refugee deal. The latest comment on last year's deal with the EU came Thursday from Greek Immigration Minister Ioannis Mouzalas, who said the refugee deal was "very important for Greece." "We can't say in any way that this agreement has collapsed or has not been implemented. This deal is very important for us," the minister told reporters in the Greek capital Athens. Mouzalas said refugee crossings fell 97 percent after the deal was struck Thursday.

In March 2016, Turkey and the EU signed a refugee deal which aimed to discourage irregular migration through the Aegean Sea by implementing stricter measures against human traffickers and improving the conditions of Turkey's 3 million Syrian refugees.

Joel Millman, a spokesman for the International Organization for Migration (IOM), said on Tuesday that the number of asylum-seekers crossing into Greece had fallen sharply due to measures adopted by Turkey last year after the deal.

However, Mouzalas said that as of August there was a slight increase in the number of refugees crossing to the Greek islands. Still, a total of 281 foreign nationals were taken into custody in Turkey on Wednesday for being in the country illegally, according to security sources.

Turkish Coast Guard units in the western coastal province of İzmir stopped 54 people, including 38 Syrians and four Afghan nationals, who were trying to cross the Aegean Sea in a dinghy. They set off from the Didim district of Aydın and were attempting to reach the Greek islands illegally.

"The EU-Turkey migrant deal works and it continues to be effective: The number of refugee arrivals via the Eastern Mediterranean has been drastically reduced since it came into force," EU Migration Commissioner Dimitris Avramopoulos said last week. "The EU needs Turkey and Turkey needs the EU, if we want to truly manage this challenge together."

As EU officials continue to praise Turkey's role in the Turkish-EU refugee deal and stress the bloc's commitment to it, Turkish politicians have criticized the EU for not keeping its promises.

The deal included a 6 billion-euro ($6.8 billion) aid package to help Turkey care for millions of refugees hosted in the country, and the EU promised to initially allocate 3 billion euros ($3.5 billion) in its first tranche for projects to support Syrian refugees.

However, only 800 million euros ($930 million) have been transferred so far. Ankara says it has spent more than 20 billion euros ($24.1 billion) of its own national resources to help and provide shelter to refugees since the beginning of the Syrian civil war.

The agreement also allowed for the acceleration of Turkey's EU membership bid and visa-free travel for Turkish nationals within the Schengen zone that is mostly comprised of EU member states.

Regarding living condition among refugees on the islands, Mouzalas said he has written letters to the mayors of the islands, calling on them to take the needed measures. If necessary, refugees could be accommodated on military ships, he added.

Mouzalas also said that there has been a 27-percent rise in family reunification this year compared to last year. However, he refused to take the blame for the slow process.

"We asked for two charter planes from Germany but we got no reply," he said.

Yesterday, a group of refugees who had been left stranded in Greece started a hunger strike in Athens, in protest against the delays in reuniting with relatives, mainly in Germany. More than 100 refugees, including many children, staged a protest in the center of the city. Some of them held banners saying "Borders destroy families" and "I want to go to Germany."

The already poor conditions under which thousands of refugees and migrants live on the Greek Aegean islands have significantly deteriorated over the past few weeks, international aid workers and local officials warned last week.

"The situation is worsening each day," the chief of Doctors of the World (Medecins du Monde) told the reporters in Athens.

According to official figures, there are some 14,500 people in asylum processing centers on the islands of Lesbos, Chios, Samos, Leros and Kos, double the capacity of the camps.

The regional governor, Christiana Kalogirou, told Skai TV that "the islands must be relieved" and as many people as possible must be brought to the Greek mainland before autumn gains full momentum.