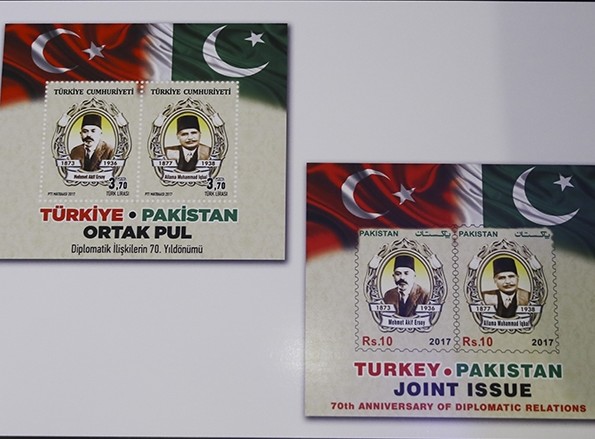 Speaking at the inauguration ceremony at the General Directorate of Post and Telegraph Organization (PTT) Stamp Museum in the capital Ankara, Pakistan's Ambassador to Turkey, Syrus Sajjad Qazi, said: "During the past 70 years, Pakistan-Turkey relationship has blossomed in all fields. We have stood by each other, supported each other, and felt the pain and compassion for each other."

The stamp has a picture of Mehmet Akif Ersoy, poet of the Turkish national anthem, and Allama Muhammad Iqbal, Pakistan's national poet.

Qazi said: "Their thoughts and their convictions are still a source of inspiration for us. They left an indelible imprint on the hearts, minds and souls of the two nations. They indeed made Pakistan and Turkey, two countries, one nation."

He added that the relationship between Turkey and Pakistan is a "story of unparalleled, unprecedented and indissoluble relationship of brotherhood, mutual trust, affection and selflessness."

PTT Chairman Kemal Bozgeyik said Turkey had issued 13 stamps about Pakistan on various occasions, but this was the first time they were issuing a stamp together.

Fazlı Çorman, Director General for South Asia at the Turkish Foreign Ministry, said: "A relationship as special as Turkey-Pakistan, based on a bond of communion rather than benefits, is rare".

The stamps were signed by Qazi, Çorman, and Bozgeyik, followed by the inauguration of an exhibition featuring historic stamps from both countries.

The exhibition will be open to the public until Nov. 17.

The stamp can be bought from PTT offices, www.filateli.gov.tr and the Philately mobile application.