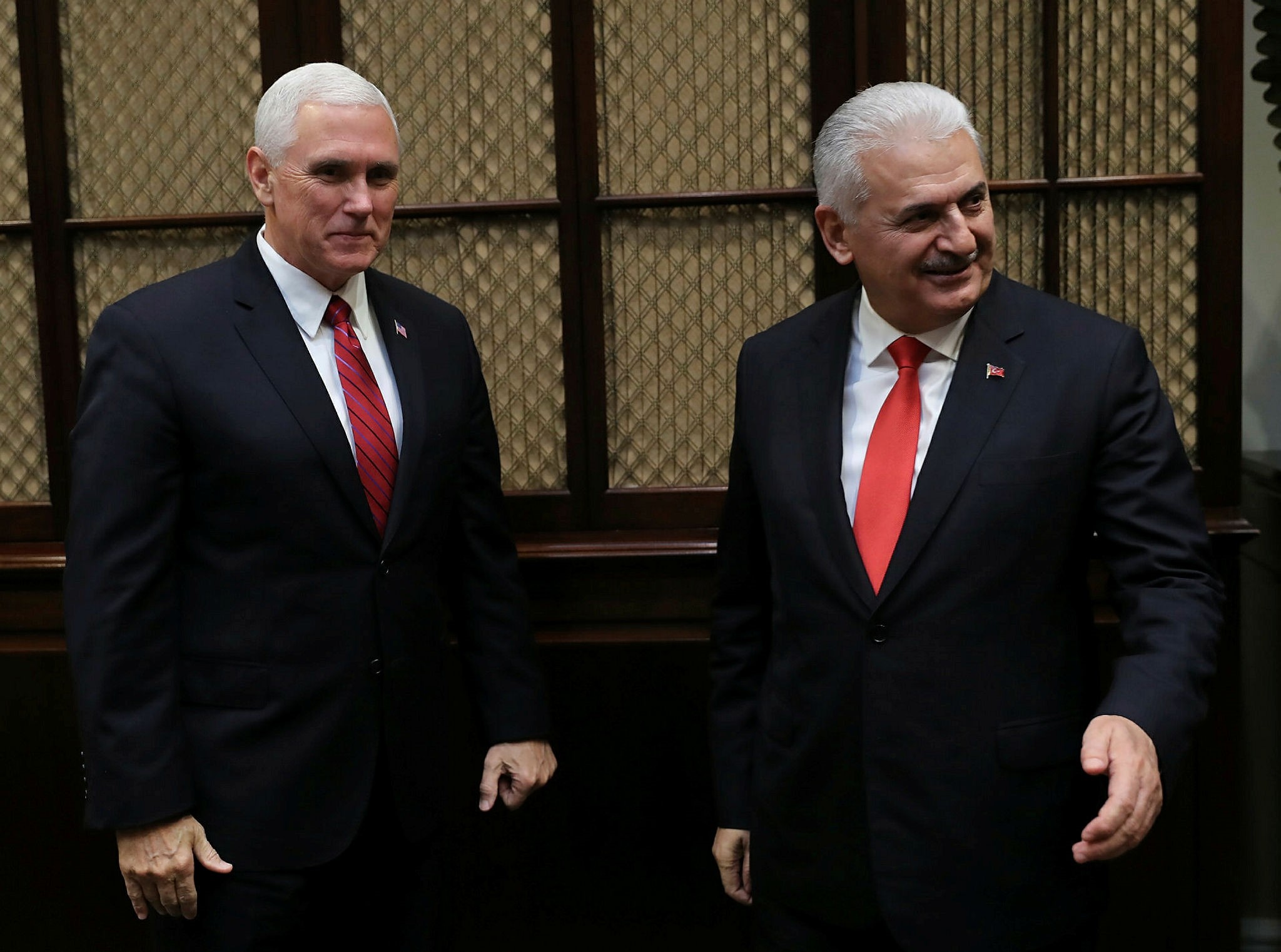 U.S. Vice President Mike Pence and Prime Minister Binali Yıldırım held a meeting Thursday at the White House, in which they discussed the issues of the extradition of Fetullah Gülen -- the leader of Gülenist terror group (FETÖ) who has been living in Pennsylvania since 1999 -- weapons the U.S. provides YPG terrorists and the recent visa crisis.

"Frankly, the meeting was very productive. We discussed the problems encircling our bilateral relations," Yıldırım said.

"We have reiterated that the recent deterioration in our bilateral ties benefits neither Turkey nor the U.S.," he added, touching upon the visa spat which was ignited by the arrest of Metin Topuz, an employee at the U.S.' Istanbul Consulate General.

"We expect normalization in the visa crisis, and Mr. Pence has a positive stance on finding a solution," Yıldırım said, adding that he invited him for a visit to Turkey.

"We have requested a concrete step in the extradition of Gülen," he said, mentioning the fugitive preacher who lives in a 400-acre compound in Saylorsburg, Pennsylvania, running a shady network which orchestrated last year's coup attempt that left 250 people and more than 2,200 injured.

"We demanded that at least a step to restrict Gülen's movements and actions be taken as a start," he said, adding that the extradition process is long overdue.

"It makes us wonder if there is a reason that no steps are being taken in Gülen's extradition," he added.

"Upon our Gülen remarks, he brought up the arrests of consulate employees and pastor Brunson," Yıldırım added.

Turkish authorities issued an arrest warrant on Oct. 9 for another personnel working for the U.S. Consulate in Istanbul, whose wife and son were then interrogated by the police.

"We also received promise from Pence to keep better track of weapons provided to the YPG," Yıldırım said. Pence touched upon this matter as well, saying that the U.S. understands Turkey's concerns, according to Yıldırım.

"Pence said U.S. understands Turkey's sensitivity about the YPG; their partnership is temporary and will last only a little longer now that Raqqa operation is complete," he said.

"We also discussed regional developments. Mr. Pence thanked us for our stance in the referendum in Northern Iraq," he said, adding that the vice president said the U.S. appreciated Turkey's attitude in not punishing the Kurdish people yet still opposing the illegal independence referendum.

"He told us that they expect us to give more support to the Iraqi central government," Yıldırım said.

"We will cooperate better against Daesh terror," Yıldırım added, saying that the Geneva process in Syria should be activated.

"I told them that the Astana talks are not an alternative to Geneva, and we have to stop the civil war with a new formula."

"We also discussed the arrests of Reza Zarrab and Mehmet Hakan Atilla. Our delegation reiterated that these arrests are unlawful, as the people who prepared the documents did it through illegal means and are now being tried in Turkey," Yıldırım said.

The indictment broadened a case targeting Turkish-Iranian gold trader Reza Zarrab - arrested in Miami in March 2016 - over sanctions evasion, which has fueled tension between the U.S. and Turkey.

Çağlayan and Aslan are charged with "conspiring to use the U.S. financial system to conduct hundreds of millions of dollars' worth of transactions on behalf of the Government of Iran and other Iranian entities, which were barred by U.S. sanctions," between 2010 and 2015.

They were also accused of lying to U.S. government officials about those transactions, laundering funds and defrauding several financial institutions by concealing the true nature of these transactions, the office added in the filing.

Later in the day, the office of the vice president released a readout regarding the discussion. "Today at the White House, Vice President Mike Pence met with Turkish Prime Minister Binali Yildirim to reaffirm the enduring strategic partnership between the United States and Turkey," the office said in the readout.

"The leaders expressed hope that their meeting would help to usher in a new chapter in U.S.-Turkish relations and agreed on the need for constructive dialogue, as friends and allies, on bilateral challenges. They highlighted the United States and Turkey's mutual interest in stability and security in the Middle East and agreed to further intergovernmental consultations toward that end," the office added.

"The vice president also thanked the prime minister for Turkey's contributions to global security and the fight to defeat ISIS, and he underscored the U.S. commitment to stand with Turkey against the PKK and other terrorist threats," Pence's office said, using an alternative acronym for the Daesh terrorist group.

"The vice president expressed deep concern over the arrests of American citizens, Mission Turkey local staff, journalists, and members of civil society under the state of emergency and urged transparency and due process in the resolution of their cases."

After the meeting, Yıldırım also met U.N. Secretary-General Antonio Guterres and representatives from the Jewish community in New York.