Turkey, US slam Greece for granting furlough to terror convict 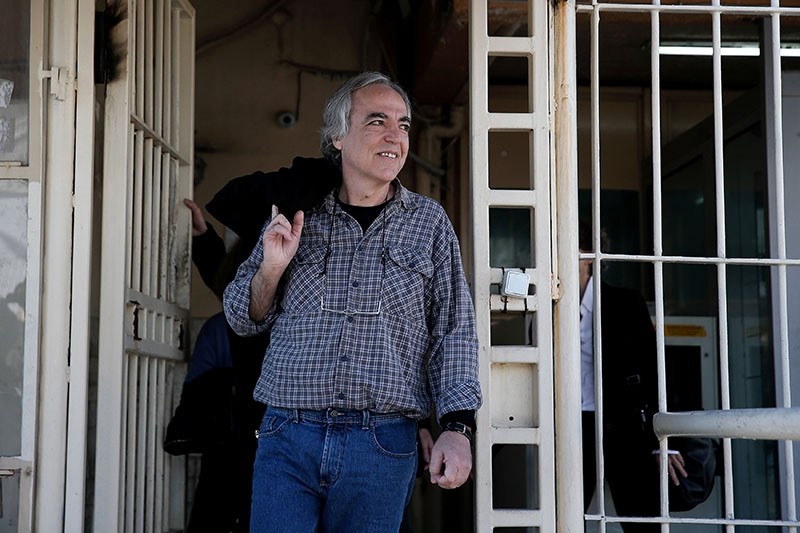 A convicted gunman for an extreme left-wing group who once was Greece's most-wanted terrorist was granted a 48-hour furlough from an Athens prison Thursday, fueling a political debate on prison sentencing and law and order inside Greece while prompting reactions from Turkey and the U.S.

Dimitris Koufodinas, 59, is serving life for participating in 11 of the 23 assassinations attributed to the now-defunct armed group November 17, was active between 1975 and 2002.

The group's victims included military officials and diplomats from Turkey, the U.S., Britain and Turkey, as well as prominent Greek businessmen and politicians. Its first victim was a CIA station chief in 1975, and its last a British embassy defense attache in 2000.

Between 1991 and 1994, the group launched attacks targeting diplomats of the Turkish Embassy in Athens.

Turkish Press Attaché Çetin Görgü was killed in 1991 while Ömer Haluk Sipahioğlu, a counselor at the Turkish Embassy in Athens, was gunned down in front of his home in 1994.

Ambassador Deniz Bolükbaşı, Nilgün Keçeci, wife of the Turkish vice-consul, and driver Adil Yıldırım were also wounded in attacks reportedly carried out by the group.

"It is not possible to understand how a terrorist who has repeatedly claimed the lives of our diplomats is given the opportunity to enjoy such an arrangement," Turkey's Foreign Ministry said in a written statement.

"Displaying tolerance to a bloodthirsty terrorist in this manner is a sheer disrespect to the memory of our martyred diplomats," the statement said.

The U.S. also weighed in, condemning Athens' decision during an afternoon press conference.

"When some of these November 17th people who've been convicted of murder have been let out on furlough in the past, they've disappeared. So we obviously have some concerns about that," State Department spokeswoman Heather Nauert told reporters.

"We're concerned that he won't return," she added.

On Jan. 1, 2014, one of the group's members, Christodoulos Xiros, was granted furlough, but he vanished soon after. He was apprehended a year later.

The victims of Koufodinas include the brother-in-law of the current conservative Greek opposition leader, Kyriakos Mitsotakis, who described the furlough as "inconceivable."

"It's not just his despicable actions against democracy but because he's never expressed any remorse for these actions and remains an ideological instructor for a new generation of terrorists," Mitsotakis said Thursday on Twitter. His brother-in-law Pavlos Bakoyannis was gunned down by the terrorist group in 1989.

Former Athens mayor, foreign minister and current lawmaker Dora Bakoyannis, whose husband was gunned down by November 17, was visibly angry during a live broadcast after his release from jail.

"He isn't just any terrorist. He was a leader, the ideological guide, the guy who wrote a book who said that after the murder (of Bakoyannis) he went to a tavern and celebrated. While my children were crying," she told Skai TV.

Geoffrey Pyatt, the U.S. ambassador to Greece, said in a Tweet the decision was a "dishonor" to the memory of victims and their families.

Both envoys carried photos of plaques at their respective embassies commemorating November 17 victims.

The November 17 or 17N group evaded police for nearly 30 years until one of its members was arrested after a botched bomb attack in 2002. The event triggered numerous arrests and Koufodinas' conviction the following year for the murders as well as for armed robberies and bomb attacks.

Casually dressed and smiling, Koufodinas walked out of the high-security Korydallos prison in Athens Thursday and was hugged by a small group of friends and supporters.

According to police accounts, Koufodinas posed as a beekeeper and math teacher, but for years operated under the pseudonym Loukas as the 17N's lead gunman, planner, recruiter and cashier.

Known as 'poison hand' for the precision of his aim, Koufodinas wrote two books, one called "I was Born November 17", and the second "13 Answers".

He described details of the organization's attacks in the 2014 autobiography without referring to them in the first person.

The conditions of Koufodinas' time outside prison were set under a law passed in 1989. The furlough nonetheless touched off a spat between Greece's left-wing government and the opposition New Democracy party. The conservative New Democracy accused the government of endangering public safety and urged the Justice Ministry to block his leave.

"Greeks are in shock at the sight of 17N's chief killer, Dimitris Koufodinas, being granted a two-day leave. He is a terrorist who has not expressed a trace of remorse to the families of 11 people he murdered," party spokeswoman Maria Spyraki said.

Greece's National Association of Prison Wardens said Koufodinas had earned the right to request a leave.

"Dimitris Koufodinas has had no disciplinary infringement while in prison and has met all the conditions required for a furlough," the association said.

"There should be an end to disputes over (rights) that are self-evident," the wardens groups said. "The law must be upheld."

The 17N group took its name from the date of a 1973 student uprising against the military dictatorship. It is normally marked every Nov. 17 with street protests in Athens.