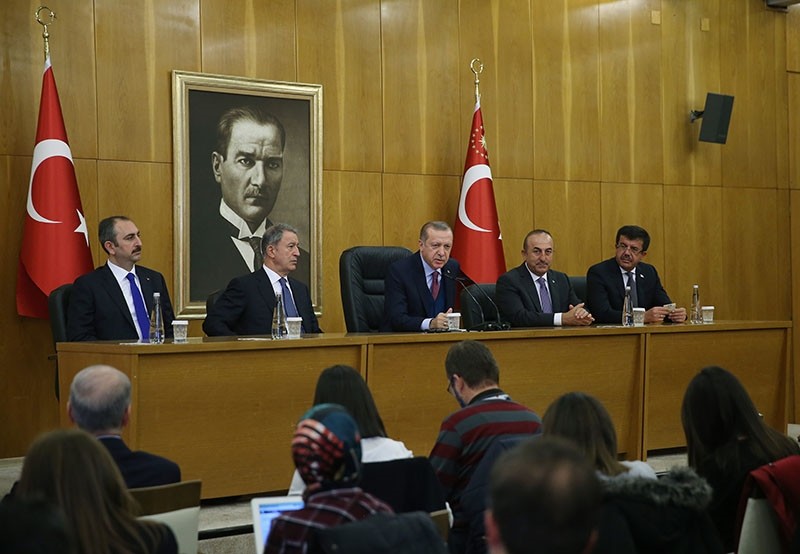 Those who say there is no military solution in Syria are those who have deployed soldiers and have military bases in the country since the war broke out, President Recep Tayyip Erdoğan said Monday, criticizing recent comments made by U.S. President Donald Trump and his Russian counterpart Vladimir Putin on the sidelines of a regional summit in Vietnam.

"I am actually having difficulty understanding such remarks," President Erdoğan said regarding a question about the U.S. and Russian presidents' remarks on Syria, speaking during a press conference at the Istanbul Atatürk International Airport ahead of his official visit to the Russian city of Sochi, where Erdoğan is expected to discuss recent bilateral and regional issues with Putin.

"The number of people killed by the [Assad] regime's "military methods" has reached 1 million in Syria. The U.S. and Russia should pull their troops out if a 'military solution' is not on the table," Erdoğan said.

"If a military solution is not possible, then [Russia and the U.S.] should withdraw their soldiers. Turkey does not have soldiers there, they do. They have all their forces there. The U.S. and Russia can withdraw their forces, and a political solution can be sought. Ultimately, elections could be held immediately through political channels. [Has President Trump or President Putin] pursued such an option in the past seven or eight years?" the president asked, referring to both Washington and Moscow, which are two major powers that have been active in the Syrian Civil War, in addition to Iran.

President Erdoğan emphasized that there are some realities that need to be expressed, going on to say: "Right now, the U.S. has five military bases in northern Syria, including one air base. One base is also being prepared in Raqqa. Aside from these, they also have eight other bases that belong to them. Russia also has five bases. These [realities] are out there. What more is there to say about these realities?"

Erdoğan added that the U.S. has brought more than 3,500 truckloads of arms and military equipment into the country, and the U.S. should explain where these will go. "Who is receiving these [weapons]? Either they go to [the PKK's Syrian offshoot the Democratic Union Party] PYD or the [armed wing the People's Protection Units] YPG, or to U.S. military bases," Erdoğan said, criticizing Washington for not being honest about the situation on the ground in Syria.

The U.S. and Russia issued a joint presidential statement saying there was "no military solution" to the war in Syria, after meeting briefly on the sidelines of a APEC summit in Danang, Vietnam.

The statement, issued by officials from both sides, said the two presidents had made progress on Syria, which has been battered by six years of civil war.

During the six years of bloody conflict in Syria, the U.S. has supported the Syrian Democratic Forces (SDF), which is predominantly led by the PKK terrorist organization's Syria affiliate, the PYD and its armed wing, the YPG, in a position of military support for the PYD/YPG which has been strongly criticized by Ankara. Turkey argues that the military support provided to the YPG/PYD is ultimately used against Turkey by the PKK. While Turkey argues that there is no distinction between good and bad terrorist groups, the U.S. considers the PYD/YPG as the most effective partners in fighting Daesh on the ground in Syria.

Russia, on the other hand, has been a strong supporter of the Assad regime, carrying out a massive bombing campaign since 2015 targeting other moderate opposition groups.

"The presidents agreed that there is no military solution to the conflict in Syria," the statement said, adding that the two sides "confirmed their determination to defeat ISIS [Daesh]."

The Turkish president also commented on the de-escalation zones in Idlib, where Turkey is monitoring a fragile cease-fire deal between the Assad regime and the opposition despite both parties often engaging in clashes with the al-Qaida-linked Hay'at Tahrir al-Sham (HTS) group, saying that problems still exist in the province.

However, Erdoğan also pointed to the threat posed by the PKK and various terrorist groups inside Syria to Turkey. "Not only Idlib should come to mind, where Syria is concerned. Those who had to retreat to the east of the Euphrates River have not gone so far, despite promises," Erdoğan said, referring to the takeover of Manbij by the U.S.-backed SDF.

Turkey has repeatedly warned that it considers a PKK-aligned group's presence in the area as a direct threat to its national security.

Turkey has long argued that it is subject to constant harassment from the PYD in Afrin, and the country is determined to take the steps necessary to remove this threat, which Erdoğan also underlined during the press conference.

Both the Turkish and Russian president had previously met in Ankara on Sept. 28 where they discussed the developments in war-torn Syria. During a joint press conference, the two presidents highlighted the significant efforts being implemented in setting up de-escalation zones in Syria, in the scope of decisions made at the Astana meeting. The guarantor countries of Turkey, Russia and Iran have sought to enhance cooperation for the resolution of conflicts.

Turkey, Russia and Iran had reached an agreement regarding a national dialogue conference that could ultimately bring peace to Syria, during peace talks on Syria held in Astana last month. In the wake of the decision, Russia initiated a peace congress to be held on Nov. 18 in Sochi, announcing that all opposition groups in Syria were invited to the congress as well as the PKK-linked PYD, which was strongly criticized by Ankara. As a result of Ankara's response, presidential spokesman İbrahim Kalın stated on Nov. 5 that "Although it is not certain yet, what Russia has told us is that the meeting has been postponed for now, and the PYD will not be invited."

Following his one-day visit to Sochi, President Erdoğan is also scheduled to visit Kuwait and Qatar to discuss the latest regional developments.

During the press conference, he also highlighted Turkey has strong relations with Kuwait and Qatar, adding that the recent tensions in the Middle East and Gulf region are attempts to create new internal conflicts in the region, referring to the latest crisis between Qatar and the Saudi Arabia-led axis, urging leaders of the region to act with common sense.