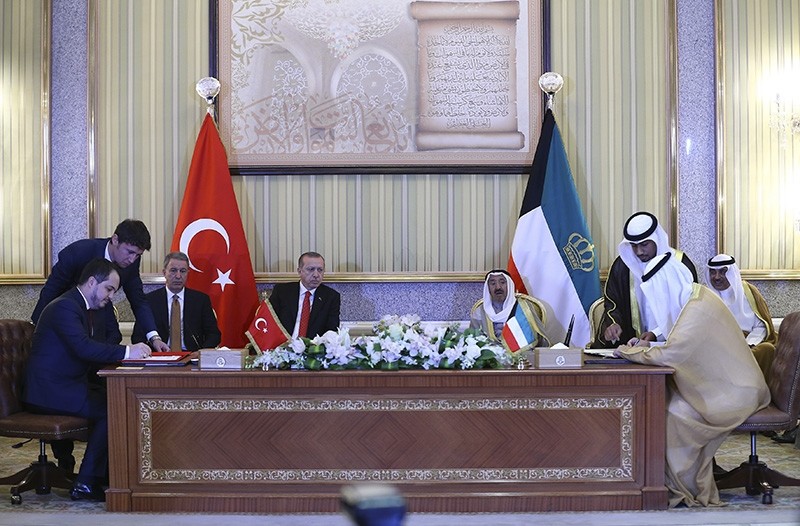 On the second stop of a three-day visit, which began with Russia on Monday, President Recep Tayyip Erdoğan discussed the improvement of bilateral economic ties in addition to regional issues with Kuwaiti Emir Sheikh Sabah al-Ahmad al-Jaber al-Sabah. The meeting between the two leaders was held at Bayan Palace, where Ankara's relations with Gulf countries were also discussed. The two leaders witnessed the signing of a memorandum of understanding for incentives on direct investment and cooperation protocol on science and technology.

Erdoğan and his delegation also discussed the Gulf crisis and steps that need to be taken to resolve it peacefully. Sabah said that the region is going through a critical period and that Erdoğan's visit is significant for the future of the region.

The bilateral trade volume between Turkey and Kuwait was $1.2 billion in 2016. Turkey's exports to Kuwait include iron and steel, motor vehicles and automotive parts, machinery and boilers and garments and accessories while the country imports organic chemicals, plastic and plastic articles, mineral fuels and oils from the Gulf emirate.

According to Development Minister Lütfi Elvan, economic ties are developing rapidly with Turkish contractors now carrying out some $6.3 billion worth of projects in the oil-rich country as of 2016.

In 2013, Turkish construction group STFA won a $488 million contract to build a port in Kuwait.

In 2015, Limak won the contract to build a new terminal at the airport for a total cost of $4.3 billion – the largest contract won abroad in a single package by a Turkish contractor. The ground-breaking ceremony for the project took place in early May with Erdoğan in attendance.

The new passenger terminal in Kuwait is currently being built by Turkey's Limak Construction and will have the capacity to handle 25 million passengers per year while accommodating all aircraft types with 51 terminal gates. Although the project's timeline has a six-year completion date, the project will be completed in four.

The defense industry is another area of cooperation between the two countries, which have held joint military exercises. Turkey sold 80 armored personnel carriers and 12 anti-riot water cannon vehicles (TOMA) to Kuwait, which has expressed interest in cooperating with Turkey in pilot training.

In terms of tourism, Turkey now represents a premier holiday destination for Kuwaitis, with more than 70,000 visiting the country in 2014, compared to only 20,000 four years earlier. Turkey's political policies, too, are deeply aligned with those of Gulf Cooperation Council (GCC) member states.

According to Kuwait's official KUNA news agency, Kuwaiti investment in Turkey hit $5 billion in 2015, especially after the implementation of Turkey's freehold property ownership law, which allows Gulf citizens to own property in Turkey.

Kuwait Turk Participation Bank, founded in 1989, is an example of the burgeoning economic cooperation between the two countries, and in terms of overall asset size, the bank is now considered one of Turkey's leading Islamic banks.

Meanwhile, according to the GCC Chambers of Commerce Union, commercial exchanges between Turkey and Kuwait currently stand at around $2 billion, KUNA reported.

Erdoğan is scheduled to visit Qatar as the last stop to weigh regional issues, particularly the Gulf crisis that began when a Saudi-led coalition imposed a blockade on Qatar in early June. The visit is also expected to result in a number of agreements.