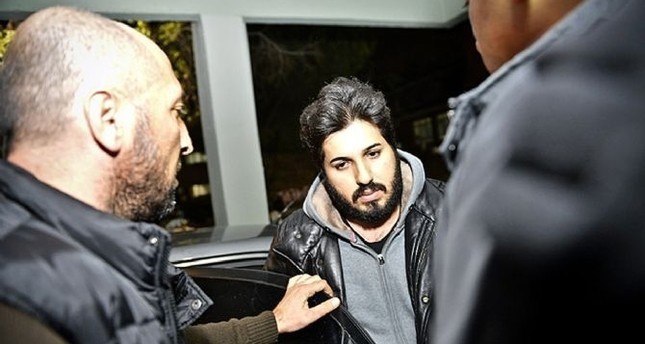 The ministry noted that Zarrab was recently threatened in a federal holding facility, which necessitated moving him to a different facility.

It highlighted the importance of the U.S. State Department's assistance in notifying the Turkish embassy and their attorneys as soon as possible when Turkish citizens are moved to a new location as well as the reasons for such a decision.

On Thursday, Government Spokesperson Bekir Bozdağ said that the U.S. responded to Turkey's note by saying that Zarrab's health condition is well.

In the note, the ministry asked the whereabouts of the businessman, who was arrested in Miami last year over accusations of engaging in hundreds of millions of dollars-worth of transactions on behalf of the government of Iran and other Iranian entities, which were barred by U.S. sanctions, while laundering the proceeds and defrauding several financial institutions by concealing the true nature of the illegal transactions.

His lawyer said that he cannot communicate with Zarrab, who is standing trial in New York, and the Attorney General's Office does not provide his specific whereabouts and the state of his health.

The office told Daily Sabah that Zarrab is in federal custody.

The indictment broadens the case targeting Zarrab over sanction evasion, which has fueled tensions between the U.S. and Turkey. Zarrab and Halkbank Deputy General Manager Mehmet Hakan Atilla, who was arrested while in the U.S. in March 2017, and are scheduled to stand trial in October. If convicted, they face prison terms of up to 30 years.

President Recep Tayyip Erdoğan has previously slammed the charges and said that they are "politically motivated, taken against Turkey as a state, and part of bad smelling business."

"I am assessing the legal step taken against our former economy minister and I am emphatically saying that this is a step taken against the Republic of Turkey, as the U.S. has not been able to provide the basis of the allegation against him personally as of yet," Erdoğan had said.

Relations between Ankara and Washington have soured over U.S. support for the PKK terrorist organization's Syria offshoot the Democratic Union Party (PYD) and its armed wing the People's Protection Units (YPG) in Syria, which is currently supported by Washington.

Ankara, on the other hand, has designated the PYD/YPG as a terrorist group, despite Washington declaring them the most effective partner in the fight against Daesh. Turkey argues that there is no difference between the PYD/YPG and the PKK, which is listed as a terrorist organization by the U.S., EU and Turkey.