Same trap in FETÖ judicial coup attempt set up in US with Zarrab case, Erdoğan says 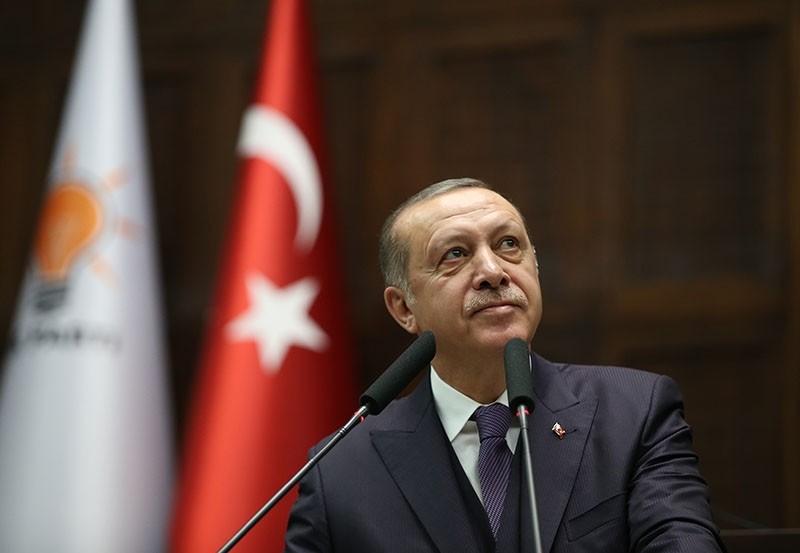 President Recep Tayyip Erdoğan reiterated that Reza Zarrab's trial is a politically motivated case and that the same trap used in the Dec. 17-25 judicial coup attempt of the Gülenist Terror Group (FETÖ) is being used again.

"One of the biggest traps in Turkey's history was set up during the Dec. 17-25 operations under the disguise of the law. When this attempt failed through our nation's resilience, the same trap was set up in the U.S.," President Erdoğan said in his speech Tuesday at the Justice and Development Party's (AK Party) parliamentary group meeting.

Reza Zarrab, a Turkish-Iranian gold trader, was arrested in Miami on March 16, 2016 on charges of engaging in hundreds of millions of dollars of transactions on behalf of Iran's government and other Iranian entities, which were barred by U.S. sanctions.

Meanwhile, Zarrab allegedly laundered the proceeds and defrauded several financial institutions by concealing the true nature of his illegal transactions.

Zarrab and Halkbank's Deputy General Manager Mehmet Hakan Atilla, who was also arrested while in the U.S. in March 2017, were scheduled to stand trial on Nov. 27 but on late Tuesday the trial was postponed to Dec. 4.

On Monday, Deputy Prime Minister Bekir Bozdağ raised questions about the methods the U.S. authorities used to obtain the evidence, asking, "Is there a copy or originals of the evidence? How did FBI agents confirm these? Is there correct data?"

"Those conducting the trial are applying pressure on the defendants. They are, in a way, held hostage," Bozdağ said.

Erdoğan stated that a country, which always stresses the rule of law, is trampling on another country's law with political motives and added that their other methods would also fail as long as Turkey remain united.

"They have tried everything, but Turkey did not surrender," the president said.

Underlining that there have been an attempt to drag Turkey toward a certain direction, particularly since 2013 with some scenarios related to its region, he said their efforts have failed. He added, "Currently they are attempting to disgrace Turkey in the international field, and they are trying to corner and defame the country and push it toward the direction they want."

Erdoğan said, "The political aims behind these insidious threats toward our country are very obvious."

"We are aware of these messages. We know the reason why the issues have become a part of a crisis when it comes to Turkey even though they do not comprise a problem for other countries," he said.

The government denounced the probe as a plot by FETÖ's U.S.-based leader Fetullah Gülen, who orchestrated the failed coup attempt in Turkey last year that left 250 people dead and nearly 2,200 injured.

"If some people still continue to accuse us with the voice of FETÖ, it is because they are playing the role attributed to them in the same trap," he said.

Turkey has recently launched a probe into two American lawyers, including a former attorney and another attorney in the U.S., who are currently involved in a case against Turkish citizens in New York.

The Public Prosecutor's Office in Istanbul on Saturday accused former U.S. attorney Preet Bharara and current U.S. attorney Joon H. Kim for the southern district of New York of using information and documents from previous investigations in Turkey for an ongoing case in the U.S.

Bharara, who had launched a probe against Zarrab, was fired on March 11. Joon H. Kim is the acting United States attorney for the southern district of New York.

Meanwhile, the president also reiterated Turkey's concerns regarding the U.S.' policies in Syria, saying that the creation and destruction of the Daesh terror group raise questions.

He noted that the U.S. said that Daesh terrorists have been cleared, adding, "Then how come arms-laden trucks are still heading to Syria?" referring to the transfer of arms to the PKK's Syrian affiliate, the People's Protection Units (YPG) in Syria.

Erdoğan continued to say that the U.S. needs to explain why they are still arming the YPG in northern Syria.