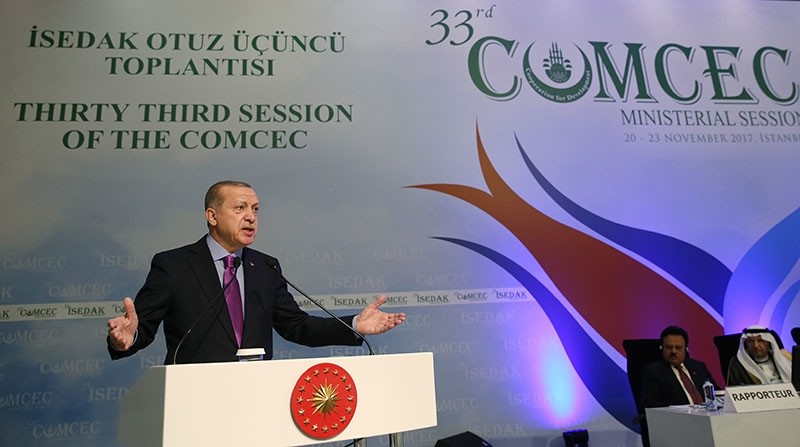 The Islamic world should display unity against apparent terror threats and those who use these groups for their aims in the region, President Recep Tayyip Erdoğan said Wednesday at a conference that brought together the members of the Organization of the Islamic Cooperation (OIC) in Istanbul.

"We see that gangs of murderers like Daesh, Boko Haram, FETÖ, PKK are responsible for turning the whole region from Syria to Iraq, Yemen to Libya, into a bloodbath. But figures who appear on the stage should not prevent us from seeing the real actors, scriptwriters behind the curtain," Erdoğan said in the opening speech for the 33th meeting of the Standing Committee for Economic and Commercial Cooperation of the Organization of the Islamic Cooperation (COMCEC).

He added that the Muslim world cannot remain indifferent to the fact that these groups are being used as tools for animosity against Islam.

"Who are the real winners of billions of dollars of arms orders by Islamic countries to the West? The fact that brothers facing the same Qibla five times every day are being pitted against each other over differences of roots, sects or ideologies serves whom? Dissolution of our countries yet again through artificial boundaries serves whose interests? I believe that sincere answers to those questions would give us a new perspective," Erdoğan said.

As OIC's term president Turkey's head of state, Erdoğan called on member countries to actively participate in COMCEC work groups and project financing opportunities. "For this, we need to give operability to the preferential trade system that has long been on our agenda," Erdoğan said, noting that every day of delay is a big loss for the community.

The president also criticized Western countries' indifference to humanitarian crises among Muslims, adding that racist and discriminatory ideologies are increasingly displacing democratic values in the West.

"The West's unresponsiveness to the violence that has been going on in Syria for seven years, to the inhumane treatment refugees are subjected to at border gates, and to the genocide of the Rohingya have revealed the true face of the West," Erdoğan said, adding that values such as democracy, human rights and freedoms have been more and more replaced by Islamophobia, neo-Nazism and racism.