Trump told Erdoğan no more weapons will be provided to YPG: FM Çavuşoğlu 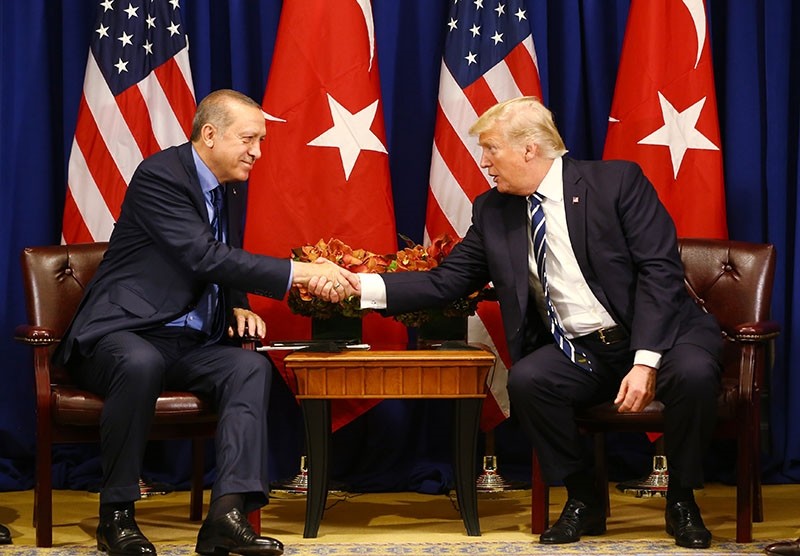 Speaking to reporters after the phone call between the two leaders, Çavuşoğlu welcomed Trump's guarantee, saying Turkey wants to see the decision being implemented.

The governments strongly disagree over the path ahead in Syria, with the U.S. backing the Democratic Union Party (PYD) and its armed wing the YPG in the war against Daesh, a position that has angered Ankara.

Turkish officials have reiterated countless times that the PYD and YPG are no different than the PKK, which is a globally recognized terrorist group.

The foreign minister also said President Erdoğan told Trump that minor issues like the visa row should not be qualified as "problems" between U.S. and Turkey.

A presidential statement said late Friday that the two leaders stressed the importance of strengthening bilateral ties and agreed on the joint fight against all terrorist organizations including Daesh, PKK and the Gülenist Terror Group (FETÖ), while the White House said in a statement that Trump reaffirmed the strategic partnership between the U.S. and Turkey, particularly in combating terrorism in all its forms and fostering regional stability.

"Consistent with our previous policy, President Trump also informed President Erdoğan of pending adjustments to the military support provided to our partners on the ground in Syria, now that the battle of Raqqa is complete and we are progressing into a stabilization phase to ensure that [Daesh] cannot return," the White House statement said.

The two presidents also discussed the purchase of military equipment from the U.S., the statement added.

Earlier Friday, Trump announced the intended call to discuss bringing peace to the Middle East, two days after a crucial meeting between Turkey, Russia and Iran on Syria.

Trump made the announcement through Twitter at 7.04 a.m. Washington time (1204GMT).

Will be speaking to President Recep Tayyip Erdogan of Turkey this morning about bringing peace to the mess that I inherited in the Middle East. I will get it all done, but what a mistake, in lives and dollars (6 trillion), to be there in the first place!

Trump railed during his campaign about the ongoing conflicts in Afghanistan and Iraq, but has boasted about progress in recent months under his watch.

Trump said in a series of tweets that he'll "get it all done, but what a mistake, in lives and dollars to be there in the first place!"

It's unclear exactly which countries he's referring to, but Trump has cited $6 trillion in the past to assess U.S. spending on conflicts in the Middle East.

Fact checkers have found that number to be only partially accurate since it falls on the high end of analysts' estimates and includes future medical care and disability benefits and nation-building costs.

Meanwhile on his way back from Sochi Thursday, President Erdoğan also said that he may speak with Trump in the coming days.

"Let's hear what they have to say about what they are doing. In Hamburg, they said they had recorded the registration numbers of all weapons given to the YPG and would be collecting them after Daesh was destroyed. Did they do so? Now, there is talk about a new U.S. base in Raqqa; their 14th base. Five or six of them are air bases," he said.

Turkey opposed the U.S. invasion of Iraq in 2003, a decision that raised tensions between the nations. However, recent events have strained the relationship between the two NATO allies to levels not seen in decades, as Ankara appears ever friendlier with Russia.

During the phone call, Trump has also touched upon the issue regarding the detention of two locally employed staff at a U.S. consulate in Turkey, who were arrested over suspected links to the Gülenist Terror Group (FETÖ), while Erdoğan criticized the U.S. move to indict 15 Turkish security officials during his Washington visit in May, calling the indictment "undemocratic" and labeling it as not binding for Turkey.

Meanwhile, a trial is ongoing against Turkish-Iranian gold trader Reza Zarrab and one of state-run lender Halkbank's deputy general managers, Mehmet Hakan Atilla, both accused of skirting sanctions on Iran in a gold-for-oil deal. Turkish officials argue that the case is politically motivated and based on illegally-gathered and false evidence obtained by FETÖ-linked police officers and prosecutors.