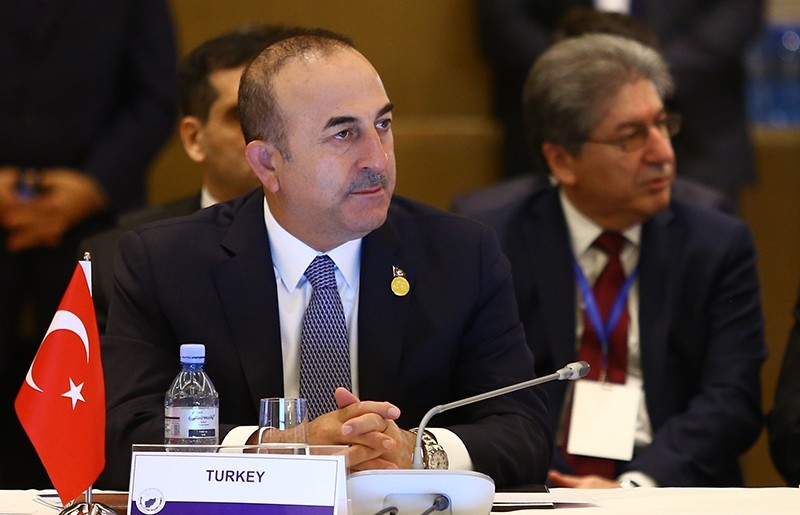 Foreign Minister Mevlüt Çavuşoğlu said racist and radical figures within European Parliament and the Parliamentary Assembly of the Council of Europe (PACE) are against the core values of these institutions.

Delivering a speech in Baku, Azerbaijan, Çavuşoğlu said Thursday that Europe's biggest issues now are racism, xenophobia and Islamophobia. "We need to demonstrate our strong stance against them. It is our duty to warn politicians that lose their ground," he said.

Çavuşoğlu said there are PKK supporters terrorist in European Parliament and PACE."This is a sign of European hypocrisy," he said.

Ankara has long been levying harsh criticism on the EU and member states for harboring PKK terrorists and not taking a clear stance against them. Last year, European Parliament hosted a photography exhibition of PKK and People's Protection Units (YPG) terrorists. Around 30 photographs showed the terrorists in northern Syria with certain regions labeled cantons in the captions.

A large 2013 photograph of PKK leader Abdullah Öcalan, who was convicted in 1999 of terrorism and treason and is currently serving out a life sentence, was also displayed in the exhibition.

Moreover, Belgium, France, Germany, Italy, Romania and Switzerland are countries in which the PKK openly conducts propaganda and fundraising activities, according to "The European Union Terrorism Situation and Trend Report 2017."

"Belgium, France, German, Italy, Romania and Switzerland reported that the PKK continued its fundraising, propaganda and recruitment activities," according to the report. The PKK, which is recognized as a terrorist group by Turkey, the U.S., and EU, has taken thousands of lives in decades of attacks in Turkey, including 1,200 since July 2015 alone.

"In France, it operated a legal front, which includes the Conseil Kurde de France [CDK-F] and the Centre d'information du Kurdistan [CIK], and a clandestine branch aimed at collecting funds, using violence in some cases," the report said.

Germany is also a safe haven for PKK terrorists. The PKK collects 25 million euros annually in donations from across Europe, Germany's domestic intelligence service (BfV) said in a report released in July. "The PKK managed to double its revenues from donations in Germany within the past 10 years," the report said. The BfV's annual report said the terrorist group had nearly 14,000 followers in Germany and had recently increased its recruitment activities, sending dozens to camps in northern Iraq.