Turkey could cut diplomatic ties with Israel over US recognition of Jerusalem as capital, Erdoğan says 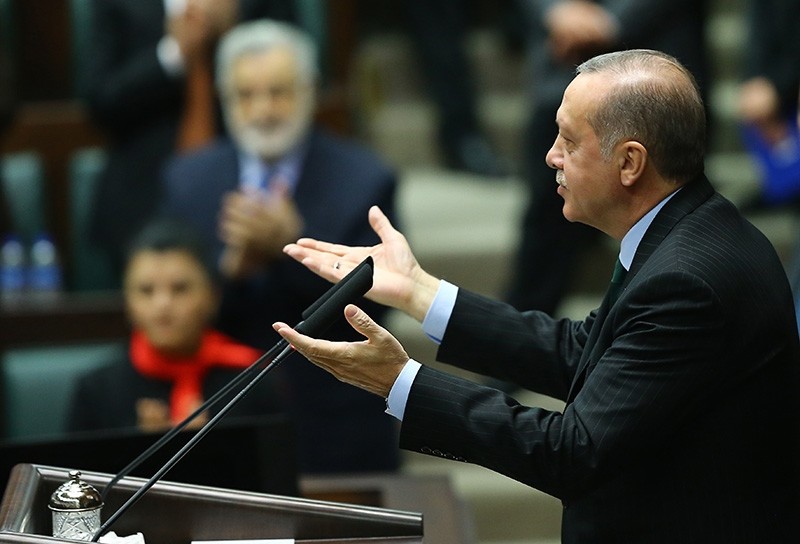 President Recep Tayyip Erdoğan slammed the U.S. about a number of issues Tuesday, including its pending recognition of Jerusalem as Israel's capital and its underhanded dealings with the Daesh terror group.

"Jerusalem is the red line for all Muslims. We could go as far as cutting diplomatic ties with Israel over the issue," Erdoğan said in response to the U.S.'s stated intentions during the parliamentary group meeting of the ruling Justice and Development Party (AK Party).

"We will call for an Organization of Islamic Cooperation (OIC) summit in Istanbul if the U.S. recognizes Jerusalem as the Israeli capital."

Erdoğan once again criticized the U.S. on its methods to fight Daesh terrorist group in Syria, which has been largely carried out through the PKK terrorist group's Syrian offshoot Democratic Union Party (PYD) and its armed wing People's Protection Units (YPG).

"No one can dogmatize Turkey regarding the war against Daesh, because Turkey is the only NATO member directly fighting the terrorist group," he said.

Erdoğan also slammed the evacuation deals reached with Daesh militants, saying that these terrorists will later be used elsewhere to disrupt peace and stability in the Middle East. "Daesh militants [set free] in Raqqa operation will be deployed in deserts of Sinai and Egypt. They will serve there from now on and we (Turkey) will be monitoring this," he said.

"Against whom will the U.S. use these truckloads of weapons amassed at our borders?" the president questioned. "Against Daesh? There is no Daesh there anymore. Against Syria? No, they are in the same coalition. Iraq? No, they already invaded there."

"They will use them against Iran, or Turkey or Russia, if they dare."

Erdoğan added that Turkey will "very soon completely destroy" the groups in Syria linked to the PKK, saying that the existence of the PKK/PYD terrorist group threatens Turkey's territorial integrity.

Erdoğan added that Turkey has always worked carefully not to harm friendly powers in Syria.

"We will not watch the intent to forming a terrorist state beyond our borders with our hands and feet tied by those who want to crucify us in the U.S. with allegations of sanctions violations."

Erdoğan said that the U.S. has "a plan against Turkey."

"We see that a terror corridor has been formed in northern Syria from east to west," he added.

While recognizing the PKK as a terrorist group, which has waged war against Turkey for more than 30 years and led to the deaths on more than 40,000 people, the U.S. has treated the PKK/PYD/YPG as an ally in its anti-Daesh efforts, despite Turkey documenting its PKK ties.

Regarding the ongoing trial in the U.S. of a public bank's deputy general manager accused of violating Iran sanctions, Erdoğan said, "It appears that this case is being kept on the agenda to make Turkey give up on its gains in the region."

He once again said that Turkey did not violate any of the sanctions, but it is being accused of doing so to due to a larger domestic political clash inside the U.S. surrounding President Donald Trump in various issues.

Erdoğan compared the case in the U.S., in which Turkish-Iranian gold trader Reza Zarrab serves as a witness for prosecution, with the events of December 2013, which the government says was a coup attempt in the guise of a graft probe.

"The case in the U.S. has the same aim, to realize the same intention in the international area," said Erdoğan, accusing the Gülenist Terror Group (FETÖ) of being behind the case.

"The claim of a plot in the indictment of the case is correct. But this plot wasn't against the U.S. but Turkey."

Zarrab last month accepted all the charges against him and agreed to cooperate as a witness against Mehmet Hakan Atilla, the former deputy CEO of Turkey's Halkbank.

Zarrab was detained last year on charges of violating sanctions against Iran, while Atilla was arrested in the U.S. earlier this year on similar charges.

On claims that Iran sanctions were violated, Erdoğan said even U.S. companies and firms in other Western countries have violated the sanctions on Iran.

"Either they do not have any information about it, or the provocation is still continuing in the same way" he said.