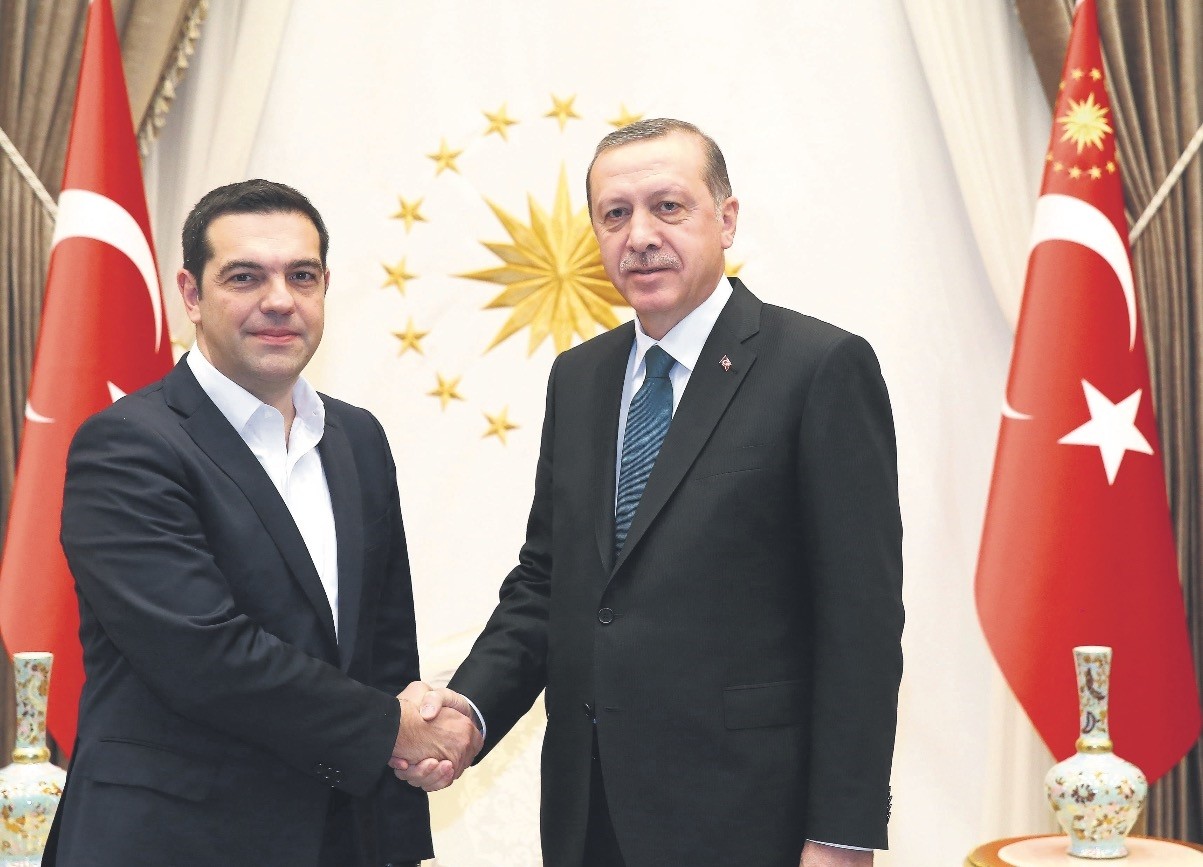 Tsipras (L) and Erdou011fan will likely discuss bilateral relations, the refugee crisis and security and regional issues, particularly Syria and Iraq, during the historic visit.
by Daily Sabah Dec 07, 2017 12:00 am

President Erdoğan will pay a historic visit to Greece, meeting with the country's leaders and discussing the key issues between the two states, especially the extradition of FETÖ-linked military officers that fled Turkey after the July 15 coup attempt

Recep Tayyip Erdoğan will become the first Turkish president to visit Greece in 65 years when he travels to the neighboring country today in order to discuss the extradition of coup plotters alongside with other regional topics.

The first stop in President Erdoğan's visit will be Athens, where he will meet Greek President Prokopis Pavlopoulos, and Prime Minister Alexis Tsipras.

The leaders will likely discuss bilateral relations, the refugee crisis as well as security and regional issues, particularly Syria and Iraq.

In addition, the Turkish president is expected to demand the extradition of a number of Gülenist Terror Group (FETÖ)-affiliated Turkish military officers, who fled to Greece after last year's failed coup attempt. He will emphasize the importance of the issue which has strained relation between the two neighbors of late.

FETÖ is known for its widespread infiltration of the Turkish judiciary, military, law enforcement and bureaucracy. It openly declared war on the Turkish state in 2013 when prosecutors, judges and police officers linked to the group tried to topple the government under the guise of two anti-graft probes targeting people close to the government.

Since the latest coup attempt on July 15, 2016, in which 249 people were killed by putschists, Turkey has stepped up counterterrorism operations against the terrorist group. Thousands were subsequently detained or arrested in a post-coup crackdown while thousands of others were dismissed from public sector jobs.

Greek Prime Minister Alexis Tsipras said he believes this visit will be an important opportunity for both countries to take brave steps in the future.

Speaking to Anadolu Agency (AA) yesterday, Tsipras said his position has always been clear regarding the coup plotters and that Greece would never welcome them. "In this respect, we continue our cooperation in security and judicial processes with Turkey," he added.

Regarding the Turkey-EU refugee deal, Tsipras said Turkey, by acting in accordance with its part of the deal and reducing the refugee flow in the Aegean sea, showed its commitment to the deal.

A de-escalation of tension in the Aegean Sea, the Cyprus issue, Turkey's EU process, the condition of the Turkish minority in Greece and the fight against terrorism will also be discussed at the meeting.The two leaders may also discuss the steps to increase bilateral trade as well as tourism and transportation projects.

On the second day of his visit to Greece, President Erdoğan will visit Western Thrace and meet the Turkish community in Komotini.

Greece has been criticized for its apparent tolerance of suspects involved in last year's coup attempt in Turkey. Earlier this year, a Greek court refused to deport a group of putschists who hijacked a military helicopter and flew to Greece after the coup was foiled.

Speaking at a joint press conference with Greek Foreign Minister Nikos Kotzias last month, Foreign Minister Mevlüt Çavuşoğlu said Turkey did not want Greece to become a safe haven for FETÖ, citing that 995 individuals from Turkey applied for asylum in the country since the failed coup attempt on July 15, 2016.

Underlining that both countries should take joint steps in their fight against terrorism, Çavuşoğlu said although Greece has taken steps against the Revolutionary People's Liberation Party-Front (DHKP-C) in the past, something greatly appreciated by Ankara, both the DHKP-C and the PKK were still active in the country.

"Presence and activities of these terrorist organizations should not be tolerated since terrorism is a common enemy and should be eliminated," he said.

Greece remains one of the few countries where the DHKP-C is still very active. The terrorist group reportedly operates a camp, disguised as a refugee shelter, in Lavrion, 60 kilometers southeast of capital Athens.

The country reversed its much-criticized policy of tolerance for DHKP-C supporters and arrested a number of militants, including high-ranking members of the group, in 2014.

The move was seen as improving counterterrorism cooperations between Turkey and Greece, although the refusal of Greek courts to extradite several suspects overshadowed the efforts.

The DHKP-C, in addition to attacks on Turkish security forces, was responsible for a suicide bombing at the U.S. Embassy in Ankara. The incident killed a Turkish security guard and injured a journalist in February 2013.