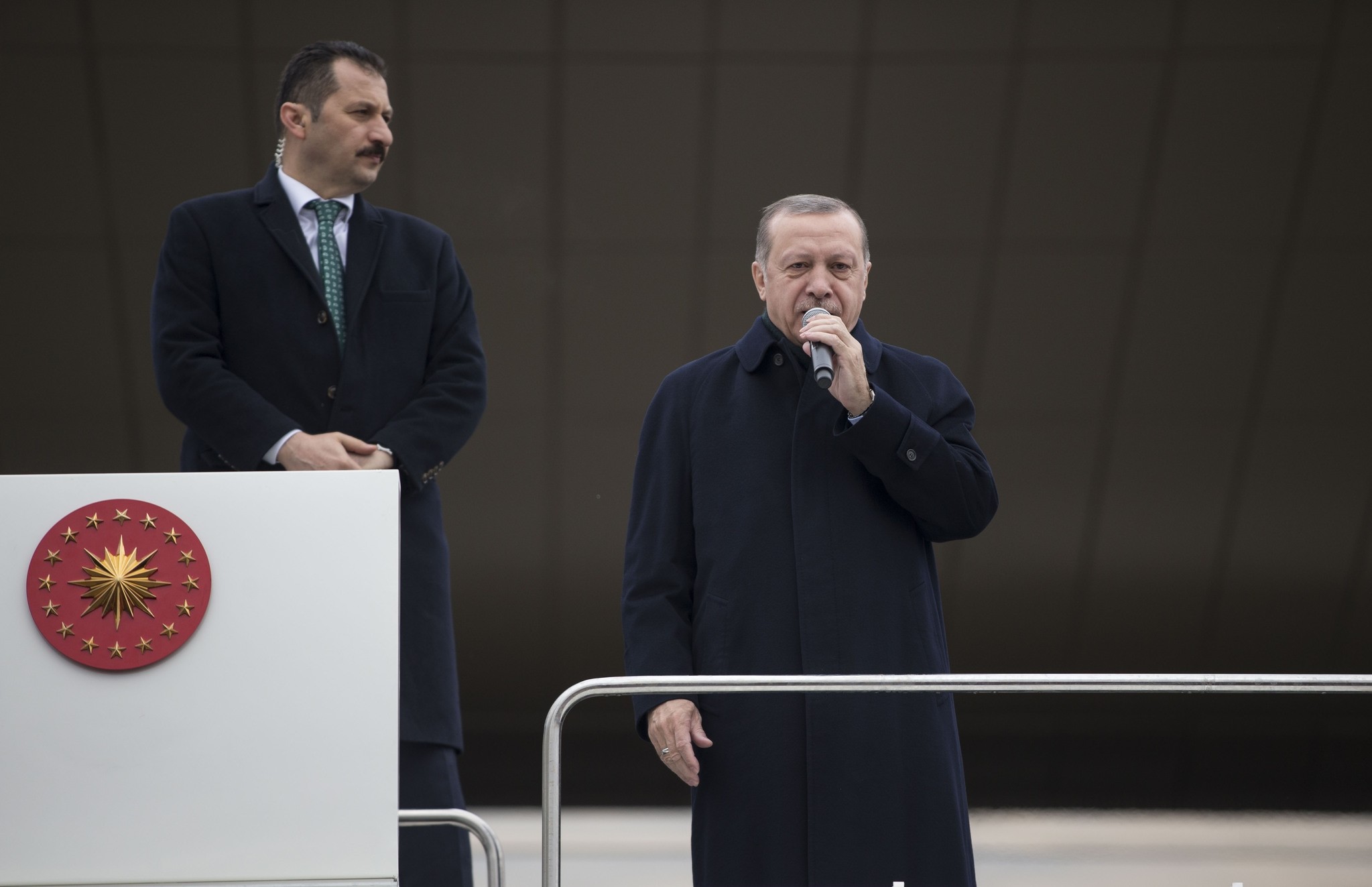 President Recep Tayyip Erdoğan said Thursday that he will talk to Pope Francis and the leaders of Russia, France, Germany, the U.K. and Spain regarding U.S. President Donald Trump's decision on Jerusalem, reiterating that the move to change the status of the holy city also concerned Christians.

Addressing his supporters at Esenboğa airport in Ankara prior to his historic visit to Greece, Erdoğan warned that Trump's remarks on Jerusalem were aimed at fueling conflict not achieving regional peace.

"If Mr. Trump says 'I am strong, so I am right,' then he is mistaken. The one who is right is the strong one," Erdoğan said in a sharp tone toward the U.S. leader. "Here, we are the right ones."

"No other countries other than the U.S. and Israel have disregarded the 1980 UN decision regarding Jerusalem."

Erdoğan also reiterated that a summit of the Organization of Islamic Cooperation (OIC) would be held in Istanbul next week to display joint action over Jerusalem.

Erdoğan and Pope Francis hold a phone call Thursday evening, discussing the U.S. decision to move its embassy from Israel's Tel Aviv to Jerusalem, presidential sources said. The president underlined that it was of vital importance to recognize an independent state of Palestine with East Jerusalem as its capital.

Erdoğan and Pope Francis stated that the status of Jerusalem should not be changed, as the city is holy to Jews, Christians and Muslims, agreeing to challenge the U.S. move on different platforms and calling for the international community to speak up.

During the phone call, the president and Pope Francis also agreed to strengthen bilateral relations between Turkey and the Vatican.

Prime Minister Binali Yıldırım earlier warned, "Pandora's box was opened in the region with the decision."

"The U.S. president's declaration of Jerusalem as the capital of Israel and the steps related to it are null and void for Turkey."

Erdoğan also called his Pakistani counterpart, Mamnoon Hussain, to discuss President Trump's decision to recognize Jerusalem as Israel's capital, according to the presidency. Sources said the leaders emphasized the decision would negatively affect peace and stability in the Middle East.

Erdoğan pointed out that there would be no lasting peace in the Middle East unless an independent and sovereign Palestinian state with Eastern Jerusalem as its capital based on the 1967 borders is formed.

He also discussed the issue with the leaders of Iran, Saudi Arabia, Qatar, Malaysia, Tunisia and Sudan earlier in the day.

On Wednesday, Turkey also condemned the U.S. administration's recognition of Jerusalem as the capital of Israel.

"We condemn the irresponsible statement of the U.S. administration declaring that it recognizes Jerusalem as the capital of Israel, and it will be moving the U.S. Embassy in Israel to Jerusalem," Foreign Minister Mevlüt Çavuşoğlu wrote on his Twitter account. "This decision is against international law and relevant U.N. resolutions," he added.

Turkey's Foreign Ministry also issued a statement on the U.S. announcement: "We condemn the irresponsible statement of the U.S. administration that we view with great concern, declaring that it recognizes Jerusalem as the capital of Israel, and it will be moving the U.S. Embassy in Israel to Jerusalem."

The statement said the decision is against international law and relevant UN resolutions, as the annexation of Jerusalem by Israel has been rejected by the international community and the UN. "It has been recurrently emphasized by various UN resolutions that the Palestinian question can only be settled through the existence of an independent, sovereign and contiguous State of Palestine based on the 1967 borders with East Jerusalem as its capital.

"It is unacceptable that the U.S., a permanent member of the U.N. Security Council, ignores this fact. Attainment of independence by Palestine is a historical, conscientious and human obligation. Turkey will continue to advocate this," the statement added.

It further stated that the decision will have negative implications on the peace and stability in the region and also bears the risk of completely destroying the grounds for peace.

It called on the U.S. administration to reconsider "this faulty decision that may result in highly negative outcomes and to avoid uncalculated steps that will harm the multicultural identity and historical status of Jerusalem."